Is capitalism compatible with Orthodox Christianity? 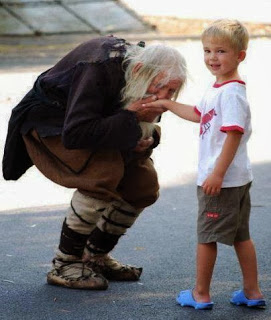 Photo from The orthodox old beggar who helps orphans

To return to a question raised by earlier podcasts, is capitalism compatible with Orthodox Christianity? Well, the answer is no. But progressivism does not offer a real alternative. Capitalism is a modernist economic system and progressivism is a modernist palliative—not an alternative.
The only real alternative to capitalism is something along the lines of what Jefferson envisioned. This is similar to the vision of the Catholic distributivists, such as Belloc and Chesterton, and to the third way of the Protestant economist Wilhelm Röpke. The foundation of such a system is widespread property ownership and decentralized government.
I should point out here that the Greek word economia means household management. Wall Street is not the economy. The economy is how you provide for yourself and your family and how you treat your neighbors in the process. It’s becoming increasingly difficult, however, to provide for ourselves when our savings are devalued by government policies and our small farms and businesses are regulated within an inch of their lives to the advantage of big corporations.
I’d like to conclude with some comments concerning the Protestant, Wilhelm Röpke. These are made by Ralph Ansel in a very good article he wrote:

For a Protestant who holds the situation created by the Reformation to be one of the greatest calamities in history, he must have difficulty finding his religious home either in contemporary Protestantism, which in its disruption and lack of orientation is worse than ever before, or in contemporary post-Reformation Catholicism. All he can do is to reassemble, in himself, the essential elements of pre-Reformation, undivided Christianity. And in this, I think I am one of a company of men whose goodwill, at least, is beyond dispute.

We know of course that undivided Christianity does not need to be, indeed cannot be, reassembled because it already exists within the Orthodox Church. But this passage is a reminder that the solution to modern man’s economic dilemmas lie not in modernism, but in the faith and life once delivered to the Saints.
Orthodoxy, alone, is capable of offering not only a critique of modernity, but of pointing us to real solutions. We cannot bear the witness to the truth that the world needs, however, as long as we continue to try to make peace with political and economic systems that, by their very nature, undermine the faith we hold and the life we endeavor to lead.
And now may our great God and Savior, Jesus Christ, through the intercessions of St. Innocent of Alaska and of the Blessed Elder Sophrony Sakharov, have mercy upon us all and grant us a rich entrance into His eternal Kingdom.