The Orthodox Christian Church in Botswana 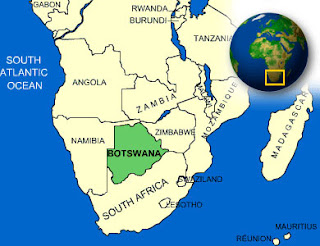 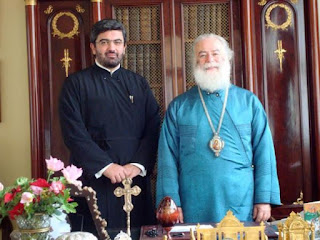 Bishop Gennadios of Botswana (left) with Patriarch Theodoros (from here)

ORDINATION OF BISHOP VASILEIOS OF BOTSWANA 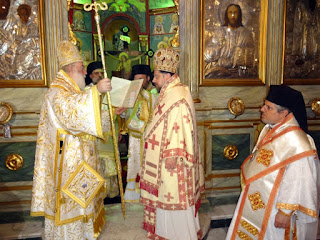 On Sunday 3o November 2014, His Beatitude Theodoros II, Pope and Patriarch of Alexandria and All Africa conducted the ordination of His Grace Vasileios Bishop of Botswana at the Holy Patriarchal Cathedral of St Savvas the Sanctified. Participating in the Eucharistic Gathering and the ordination of His Grace were Their Eminences Metropolitans George of Guinea, Dimitrios of Irinopolis, Gabriel of Leontopolis and Narkissos of Nubia.
Present were the Honourable Consul General of Greece in Alexandria Mr. Christos Kapodistrias, Chairmen of Hellenic Societies and Associations of the Great City, the Nuns that live at the Dependency of the Patriarchate of Alexandria in Athens, as well as family members and friends of the ordained Bishop.

During his address, His Beatitude emotionally said the following:
"(...) Give to the people of the Diocese of Botswana to which you were elected, your sacrificial self, working towards your personal salvation, as well as the salvation of your flock; in this world that is becoming ever more inhumane, become a preacher of the value of human beings.
As Christian humanists we have a duty to progress always further than the superficial, where human existences are formed into groups, so that we might discover the genuine human face, which is never predictable. In the discovery of the differences we need to rejoice in the surprise of the ability of finding a meeting point with another, who is different, on many levels, because in the spiritual world there is no monotony and boredom. And unity in Christ does not fear difference, but rather gives it meaning and enriches it. This inspiration is what contemporary man needs, and this is the best mission.
In Africa, the continent of the future, where the grace of the great God deemed us worthy to serve, a “vision” is needed, as well as faith. We often trad there where there is no road, because you make the way open as you walk. But I beg you my child, Father Vasileios, do not hesitate! As you look around on the path, you will see invisibly, following the Lord, just as the Disciples who walked to Emmaus. So now, that God gives you the grace of Hierarchy, today on your personal Pentecost, be sure that He will always be with you, strengthening and supporting you, in every request of your loving heart, because our God is a God of love; “I am a God near at hand, says the Lord and not a God far off”, according to the Prophet Jeremiah (Chapter 23).
Have courage, therefore, Your Grace and holy brother, because we serve the humble God of love, the God who from the eruption of His heart, left the blessing of His divinity and became man just like us, to lead us to His divine blessedness. This God awaits you now, in the Holy of Holies, to grant you the grace of Hierarchy.
So, enter into the grace of your Lord, my child, Vasileios!"
More here. 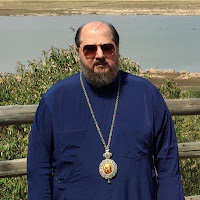 His Grace Vasileios, Provincial Bishop of Botswana (born Vasilieos Varvelis), was born in Peristeri Attica in 1969. He studied at the faculty of Health and Welfare and at the Theological Faculty of the University of Athens. He was ordained Deacon in July 1997 and Priest in March 1998 by His Eminence Chrysostomos Metropolitan of Zimbabwe. He served as parish Priest in Johannesburg and in Cairo. Thereafter by Venerable Order of the late Patriarch Petros VII, he was appointed as Parish Priest and Confessor of the patriarchal Church of St Athanasios, Nicholas and Fotios, in Ano Kypseli, the Dependency of the Patriarchate and as Secretary of the representative Office of His Beatitude in Athens, serving there for fifteen years.
On 26 November 2014, by proposal of His Beatitude, he was elected by the Holy Synod of the Patriarchate of Alexandria and All Africa as Provincial Bishop of the vacant Holy Diocese of Botswana.


The first orthodox school opened in Botswana (March 22, 2012)
world.greekreporter.com
Orthodox Mission
A Greek-British private school opened last month in Botswana, funded by the Orthodox Diocese of Botswana under the jurisdiction of the Greek Orthodox Patriarchate of Alexandria and All Africa. 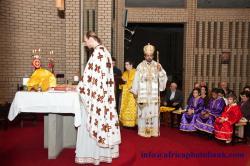 Greek, Greek-Cypriot, Ukrainian, Russian, Serbian and indigenous pupils are already visiting the school’s courses, which among others include the learning of the Greek and Russian language and the local dialect Setswana, as well as Orthodox catechism.
Bishop Gennadios is in constant talks with the Ministry of Education of the country, aiming at upgrading the school to High School levels. The Embassies of France and Germany are also aiding the purpose of the private Orthodox school.
Through these efforts, the Orthodox Diocese aims at gaining a decent presence and activity at the country by organizing different activities and initiatives concerning the fields of education and health.
“It is of high importance for our Orthodox Church to be able to serve the people and the society of Botswana in key sectors such as health and education” pointed out Bishop Gennadios in his interview to major circulation local news magazine “Discover Botswana”. The Bishop added that the Orthodox Church’s future lies in education. “The best schools in South Africa and other neighboring countries belong traditionally and essentially to the Orthodox Church. People support our work by sending their children to school to become educated and learn about the Christian values. What our Church needs to do is come out of its shell and approach the people and their needs without too much preaching and philosophy” highlighted the Orthodox Bishop.
Bishop Gennadios gave interviews to well known “Animal Planet” and “National Geographic” channels and invited the journalists to participate at this year’s Orthodox Easter celebrations in order to experience the spiritual dimension of Christianity.
During Easter time, the first doctors from Crete are expected to arrive in Botswana in order to implement new pilot medical programmes against AIDS. These programmes will be conducted in cooperation with the Medical Clinic of the Anglican Church “Hospice-Holy Cross”, where children suffering from AIDS are being treated.
The Orthodox Diocese is celebrating this year its second anniversary from its establishment in October 2010. However, the Diocese does not have a Cathedral yet. Therefore, the Bishop will hold a new meeting with the authorities in charge to secure the right property where the first Orthodox Cathedral will be built. 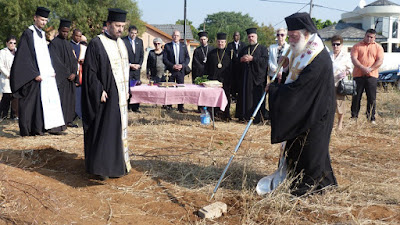 The Patriarch of Alexandreia and all Africa Theodoros founded the first Orthodox church in Canberra Botswana, with the help of Orthodox Christians from Greece and Cyprus, friends of the African people.
The church would be dedicated in the name of St. John Chrysostom, Saint Christopher and Michael Archangel.
More here (in Greek) / Photos from here. 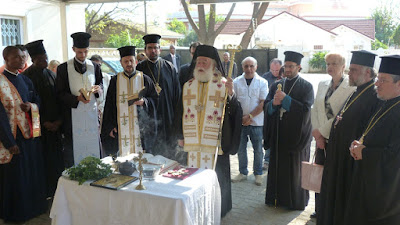