More children in Central African Republic (CAR) are at risk of being recruited as child soldiers by militant groups following a new outbreak of violence in the conflict-ridden nation, a children charity has warned.
CAR descended into chaos in 2013 after former leader Francois Bozize was overthrown during a coup. As a result of the political unrest, Muslim Seleka and Christian (our note: non orthodox) anti-Balaka militias engaged in tit-for-tat violence that has killed thousands of people and prompted hundreds of thousands to flee their homes. In the latest episode of violence in September, some 42 people were killed in Bangui in retaliation to the killing of a Muslim motorcycle taxi driver.

Both sides have been accused of recruiting child soldiers, with the UN estimating at least 10,000 children have been used as soldiers since the conflict erupted. A UN-brokered deal earlier in May resulted in the release of hundreds of children used as child soldiers or sex slaves, but NGOs fear many more are still used in fighting.
World Vision UK, an international children charity, warned more international pressure is needed to discourage militant groups from recruiting children. Erica Hall, World Vision's senior child rights policy adviser, went to CAR in September to work on an assessment with the charity's team based in the capital Bangui. However, she and her colleagues had to be evacuated to Congo following the upsurge of violence.

"Before being evacuated, we saw lots of barricades, people were very agitated," she told IBTimes UK. "There were crowds gathering at immigration custom check points and there was definitely a lot of frustration, anger and fear.
"Recruitment of children has been an issue since the outbreak of the conflict. There has been some quite considerable effort by the UN to demobilise children, but of course when you have any upsurge in fighting, it means you need more soldiers."
Hall explained that not only children are forcibly recruited by militant groups, but they also join voluntarily as a result of their frustration and anger at the deteriorating situation in the country. "This is what we call the 'push factor'," she said. "Children are quite desperate and there's a lot of anger that comes out in all ages. Children are more vulnerable to being forcefully recruited, but they also choose to join as a response to the insecurity and they try to support one group or another."
World Vision expressed fears that fighting, contained in Bangui, will affect other areas of the country. "The violence is working its way out in the country and this creates the perfect storm for recruitment," Hall said and added that an immediate end to the conflict is what the charity hopes for. Meanwhile, she said action is needed to avoid the recruitment of child soldiers.
"We need more international pressure on different armed groups to not recruit children, but we also need to address factors that underline children's vulnerability," she said. "We also need to give them a space to do something productive, it makes a difference because this anger builds up and they need an outlet for it and this, unfortunately,can lead to recruitment." 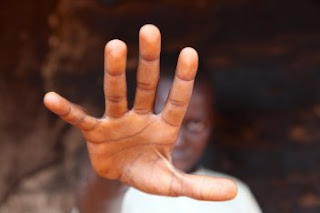 Francis, 14, joined the Christian anti-balaka militant group after his brother and uncle were killed by the Muslim Seleka militants.World Vision

Former child soldier speaks: 14-year old Francis joined anti-Balaka to avenge brother's death
Francis, who lives in CAR's Yaloke district, joined the anti-Balaka militant group after his brother and uncle were allegedly killed by the Seleka.
"I went to join the anti-Balaka because I couldn't let the death of my brother go unpunished," he told World Vision. "I killed two people with a knife - two Fulani children, then I ran to Zawa, 30km from Yaloke. I continued fighting for the anti-Balaka, I killed two more boys around 15-years old. I returned to Yaloke but the fighting has gotten more difficult because the Seleka were backed there. I killed another man in Yaloke, in a place called Lala. I used a knife."
Francis then fled the group and went to live back with his mother in Yaloke. He said: "I'm not sure what I want to see for my country in the future... it is too difficult for me to answer. But all I know is I don't want to join any armed groups anymore. I want peace, we need peace and I'm happy that the laws of the country are coming back."
The charity said: "World Vision has been supporting him and other helped Francis and other former child soldiers in our child friendly spaces where children like him can have the chance to experience a little bit of normality – a place where they can be children and play in safety. We have also been providing families with food and clothing, as well as practical assistance to return to school.

Amnesty International has said that armed groups could be profiting from the blood diamond trade in the Central African Republic (CAR). According to the human rights group, little effort is being invested by traders to check the origins of blood diamonds that are being purchased.
Amnesty International claims both the Muslim rebel group, Seleka, and the Christian group on the other side have been profiting from the diamond trade. Fighting between the two groups has renewed tensions in the capital, Bangui, with up to 38 people reportedly dead.
"The government should confiscate any blood diamonds, sell them and use the money for the public benefit. As the country seeks to rebuild, it needs its diamonds to be a blessing, not a curse," said Lucy Graham from Amnesty International, reported BBC News.
According to Amnesty International, if CAR chooses not to confiscate the diamonds and an export ban is lifted on the stones, diamond selling traders will begin selling the 'blood diamonds' signaling a very wrong message to the armed groups.
Meanwhile, Alioune Tine, Amnesty International's regional director for West and Central Africa said earlier: "The deadly violence in the capital illustrates that CAR remains in a very fragile state and that immediate action must be taken to enhance the capacity of UN peacekeepers to detect and respond effectively to such incidents before escalation of attacks on civilians."
It was also recently reported that India's most wanted man, Dawood Ibrahim, 59, is involved in the trafficking of blood diamonds to the Middle East. According to Indian intelligence authorities, Ibrahim reportedly has links to sources in Zimbabwe and Kenya.