URGENT: Maasai people are at risk of being violently evicted from their lands to make way for trophy hunting and elite tourism - this cannot be allowed to happen.
Join the call on President Samia Suluhu Hassan to end the violence and stop all evictions now!
Help us spread the word - Share this video!
➜ avaaz.org/HelpMaasai
We are Maasai elders from Northern Tanzania. Right now tens of thousands of our community could be forced off our ancestral lands to make way for elite tourism and trophy hunting.

We urgently need your support.

When we faced these threats in 2014, more than 2 million Avaaz members rallied behind our call! Together, we created such a storm that the President promised never to evict us from our lands.

But now, there’s a new head of state and plans are being revived! President Samia Suluhu Hassan may not listen to us, but we know she’ll respond to media and public pressure – to all of you! With two key high-level meetings in the region next week we only have days to deliver our global call again. Join us now – and show her the world is standing with the Maasai!

​- The Maasai elders of Ngorongoro District in Northern Tanzania
To the President of Tanzania Samia Suluhu Hassan:

As citizens from around the world, we call on you to oppose any attempt to evict Maasai from their traditional land or require them to relocate to make way for foreign hunters. We are counting on you to be a champion for your people and stop any attempt to change their land rights against their will. 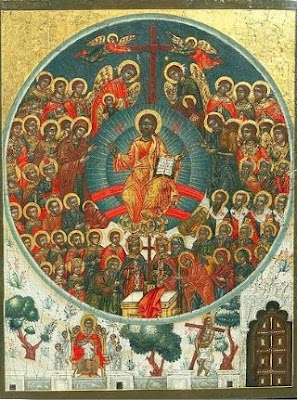 Sunday of All Saints - at La Reunion. What joy it is, to see Orthodox faithful from various nations attending the ONE AND THE SAME Divine Eucharist...

In the Orthodox Vineyard of Africa (translate A.N.) 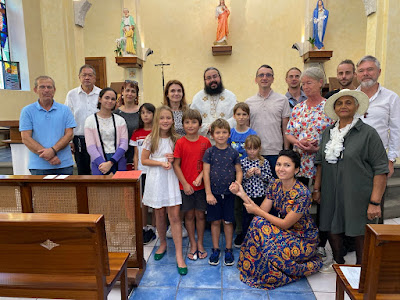 The island is located in the Indian Ocean and constitutes an overseas department of France. The Orthodox community here has a presence on the island that dates about 12 years. Like Mauritius, it belongs spiritually under the Metropolis of Northern Madagascar, and with the blessing of Bishop Ignatius, I have been here since yesterday, for the Vespers Service and Confession, then the Divine Liturgy, followed by the common meal as the culmination today.
The program will continue, with visits to homes of the Orthodox faithful, as well as to the south of the island.
What joy it is, to see Orthodox faithful from various nations attending the ONE AND THE SAME Divine Eucharist! Indicatively, today we have faithful from France, Belgium, Russia, Romania, Syria, Morocco, Martinique...
All this is a breath of unity! Instead of giving rise to division and to lack of understanding as preached by some, all this ethnic and cultural diversity that we have today is what ensures true unity and forges relationships between members which are not based elsewhere - ONLY in Christ!
Please pray for this local Church, that the Lord will stabilize it firmly in the Faith, will add new members to its bosom, and will soon make us worthy of building our own Orthodox Temple, which will be a sign of Orthodox witness on the island.
Log into Facebook 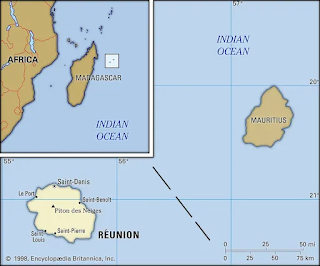 Synaxis of All Saints (the Sunday following Pentecost) 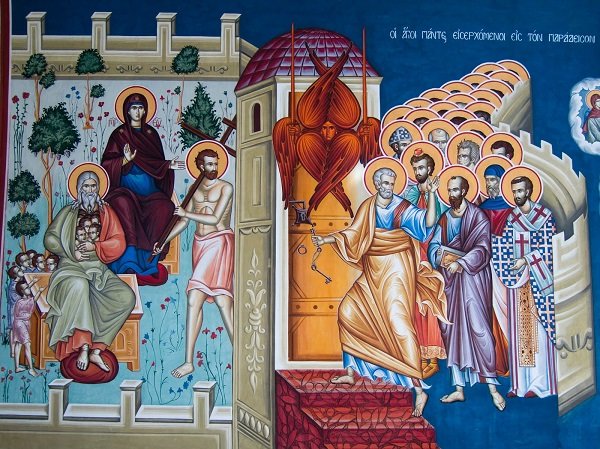 The Sunday following Pentecost is dedicated to All Saints, both those who are known to us, and those who are known only to God. There have been saints at all times, and they have come from every corner of the earth. They were Apostles, Martyrs, Prophets, Hierarchs, Monastics, and Righteous, yet all were perfected by the same Holy Spirit.

The Descent of the Holy Spirit makes it possible for us to rise above our fallen state and to attain sainthood, thereby fulfilling God’s directive to “be holy, for I am holy” (Lev. 11:44, 1 Peter 1:16, etc.). Therefore, it is fitting to commemorate All Saints on the first Sunday after Pentecost.

This feast may have originated at an early date, perhaps as a celebration of all martyrs, then it was broadened to include all men and women who had borne witness to Christ by their virtuous lives, even if they did not shed their blood for Him.

Saint Peter of Damascus, in his “Fourth Stage of Contemplation,” mentions five categories of saints: Apostles, Martyrs, Prophets, Hierarchs, and Monastic Saints (Philokalia [in English] Vol. 3, p.131). He is actually quoting from the Octoechos, Tone 2 for Saturday Matins, kathisma after the first stichology.

Saint Νikόdēmos of the Holy Mountain (July 14) adds the Righteous to Saint Peter’s five categories. The list of Saint Νikόdēmos is found in his book The Fourteen Epistles of Saint Paul (Venice, 1819, p. 384) in his discussion of I Corinthians 12:28.

The hymnology for the feast of All Saints also lists six categories: “Rejoice, assembly of the Apostles, Prophets of the Lord, loyal choirs of the Martyrs, divine Hierarchs, Monastic Fathers, and the Righteous....”

Some of the saints are described as Confessors, a category which does not appear in the above lists. Since they are similar in spirit to the martyrs, they are regarded as belonging to the category of Martyrs. They were not put to death as the Martyrs were, but they boldly confessed Christ and came close to being executed for their faith. Saint Maximus the Confessor (January 21) is such a saint.

The order of these six types of saints seems to be based on their importance to the Church. The Apostles are listed first, because they were the first to spread the Gospel throughout the world.

The Martyrs come next because of their example of courage in professing their faith before the enemies and persecutors of the Church, which encouraged other Christians to remain faithful to Christ even unto death. 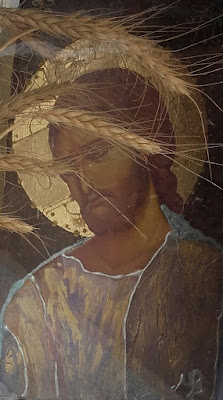 The holy Hierarchs comprise the fourth category. They are the leaders of their flocks, teaching them by their word and their example.

The Monastic Saints are those who withdrew from this world to live in monasteries, or in seclusion. They did not do this out of hatred for the world, but in order to devote themselves to unceasing prayer, and to do battle against the power of the demons. Although some people erroneously believe that monks and nuns are useless and unproductive, Saint John Climacus had a high regard for them: “Angels are a light for monks, and the monastic life is a light for all men” (LADDER, Step 26:31).

The last category, the Righteous, are those who attained holiness of life while living “in the world.” Examples include Abraham and his wife Sarah, Job, Saints Joachim and Anna, Saint Joseph the Betrothed, Saint Juliana of Lazarevo, and others.

The feast of All Saints achieved great prominence in the ninth century, in the reign of the Byzantine Emperor Leo VI the Wise (886-911). His wife, the Holy Empress Theophano (December 16) lived in the world, but was not attached to worldly things. She was a great benefactor to the poor, and was generous to the monasteries. She was a true mother to her subjects, caring for widows and orphans, and consoling the sorrowful.

Even before the death of Saint Theophano in 893 or 894, her husband started to build a church, intending to dedicate it to Theophano, but she forbade him to do so. It was this emperor who decreed that the Sunday after Pentecost be dedicated to All Saints. Believing that his wife was one of the righteous, he knew that she would also be honored whenever the Feast of All Saints was celebrated.

As with fine porphyry and royal purple, / Your church has been adorned with Your martyrs’ blood shed throughout all the world. / She cries to You, O Christ God: / Send down Your bounties on Your people, / grant peace to Your habitation, and great mercy to our souls!

The universe offers You the God-bearing martyrs, / as the first fruits of creation, O Lord and Creator. / Through the Theotokos, and their prayers establish Your Church in peace!

Pentecost (the Descent of the Holy Spirit)
Pentecost – a frontal assault on Hades!

National Identity and Unity: From Babel to Pentecost

Baptism by the Holy Spirit in the New Testament (Digital book)

God the Holy Trinity: ‘The Lover of Mankind’ (& the "depiction of God" in Orthodox Church)
The Sundays after Easter in the Orthodox Christian Heritage!
Utatu Mtakatifu, Mungu ambaye anapenda ubinadamu
Holy Trinity
Pentecostalism 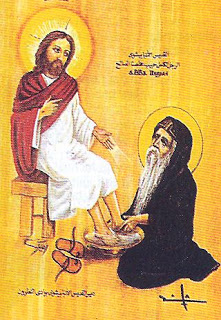 Holy Apostle Jude Thaddeus, the Brother of the Lord

St. Paisius the Great of Egypt 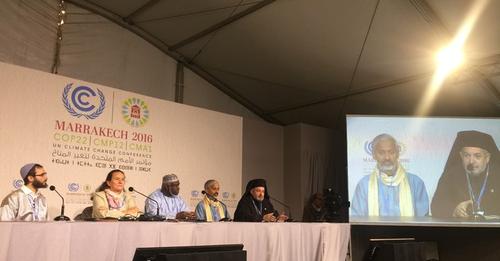