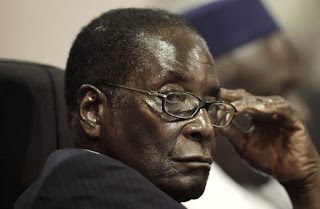 A torture camp allegedly run by Zimbabwe's security forces has been discovered by BBC Panorama, the news agency said.
An investigation led by the Panorama team discovered that the government's forces are running a torture camp in one of the country's richest diamond region.
The team says they have been in direct contact with people who had been in these camps and suffered severe beatings and sexual assault and made to work in extremely dangerous conditions.
Security forces were also accused of randomly setting dogs on the people who are held captive, while subjecting them to whippings.
"It is a place of torture where sometimes miners are unable to walk on account of the beatings," the report quoted a victim, who was released from the main camp in February, as saying.
"It is near an area known as Zengeni near Marange, said to be one of the world's most significant diamond fields. The camp is about one mile from the main Mbada mine that the EU wants to approve exports from," the report said, adding that the company that runs the mine was headed by a personal friend of President Robert Mugabe.
A second camp was said to be located in nearby Muchena.
The controversial Marange diamond fields are among the most significant known sources of the precious stones in the world.
Witnesses told the BBC that the camps had now been operating for at least three years, and that people held captive there are kept in an outdoor enclosure fenced-off by razor wire.
Marange diamonds were banned in 2009 by the Kimberley Process (KP), an international certification system to regulate trade in rough diamonds, however in June the company announced that the export ban on diamonds from two Marange mines had been lifted.
According to Reuters, the ban was lifted after industry regulators insisted the mines had met the minimum conditions requested.
The EU which had at the time refused to accept the decision has recently been pushing for the partial lifting of the trade ban on diamonds from two mines in the area, on the condition that the situation continues to be closely monitored, the BBC reported.
However fears have been raised as the 'torture camp' is said to be located about one mile from the main Mbada mine that the EU wants to approve exports from according to the BBC.


A torture camp run by Zimbabwe's security forces is operating in the country's rich Marange diamond fields, BBC Panorama has found.
The programme heard from recent victims who told of severe beatings and sexual assault.
The claims come as the European Union pushes to let some banned diamonds from the country led by President Robert Mugabe back onto world markets.
The Zimbabwean government has not responded to the BBC's findings.
In an internal document seen by the BBC, the EU said it was confident that two mines in the area now meet international standards and it wants diamonds from those areas to be immediately approved for export, which would partially lift a trade ban dating back to 2009.
The ban was imposed by the Kimberley Process (KP), the international organisation that polices diamonds, following reports of large-scale killings and abuse by Zimbabwe's security forces in the Marange diamond fields.

The main torture camp uncovered by the programme is known locally as "Diamond Base". Witnesses said it is a remote collection of military tents, with an outdoor razor wire enclosure where the prisoners are kept.
It is near an area known as Zengeni in Marange, said to be one of the world's most significant diamond fields. The camp is about one mile from the main Mbada mine that the EU wants to approve exports from.
The company that runs the mine is headed by a personal friend of President Mugabe. A second camp is located in nearby Muchena.
"It is the place of torture where sometimes miners are unable to walk on account of the beatings," a victim who was released from the main camp in February told the BBC.
All the released prisoners the BBC spoke to requested anonymity.
"They beat us 40 whips in the morning, 40 in the afternoon and 40 in the evening," said the man, who still could not use one of his arms after the beatings and could barely walk.
"They used logs to beat me here, under my feet, as I lay on the ground. They also used stones to beat my ankles."


They would handcuff the prisoner, they would unleash the dogs so that he can bite
Former paramilitary police on torture techniques used

He and other former captives said men are held in the camp for several days at a time, before new prisoners come in.
Women are released more quickly, often after being raped, witnesses said.
"Even if someone dies there, the soldiers do not disclose, because they do not want it known," an officer in Zimbabwe's military told the BBC, again on condition of anonymity.
Witnesses said the camps have been operating for at least three years.
In Marange, the police and military recruit civilians to illegally dig for diamonds for them. Those workers are taken to the camps for punishment if they demand too large a share of the profits.
Civilians caught mining for themselves are also punished in the camps.

A former member of a paramilitary police unit who worked in the main camp in late 2008 told the BBC that at the time he tortured prisoners by mock-drowning them and whipping them on their genitals.
He also said that dogs were methodically ordered by a handler to maul prisoners.
"They would handcuff the prisoner, they would unleash the dogs so that he can bite," he said. "There was a lot of screaming".
He said one woman was bitten on the breast by the dogs whilst he was working in the camp.
"I do not think she survived," he said.
Another witness the BBC spoke to said he was locked up in Muchena camp in 2008 after police set dogs on him.
He was recaptured in November 2010.
"Nothing has changed between 2008 and 2010... a lot of people are still being beaten or bitten by dogs."

Marange diamonds were banned in 2009 by the KP, the international initiative of the diamond industry, national governments and non-governmental organisations that attempts to keep conflict or so-called "blood" diamonds out of the lucrative market.
Representatives of the KP visited the area briefly in August 2010 and concluded that the situation in the diamond areas was still problematic but there had been significant progress.
The KP had previously requested that the Zimbabwean police secure the diamond area.
Witnesses told the BBC that it is Zimbabwe's police and military that run the torture camps.
Nick Westcott, spokesman for the Working Group on Monitoring of the KP, said of the BBC's discovery of the torture camps: "It is not something that has been notified to the Kimberley Process."
The EU's proposal to allow diamond sales from two key mines in Marange to resume is part of an attempt to broker a deal within the KP, which is in turmoil over the issue.

In June, KP chairman Matieu Yamba formally announced that the export ban on the two key Marange mines was lifted with immediate effect. The EU, among others, did not accept his decision.
Now the EU's proposal, designed to break the deadlock, agrees with the partial lifting of the ban, but insists that international monitoring should continue throughout Marange.
Panorama asked the Foreign Office to comment on the EU's position.
In a statement, Henry Bellingham MP, Minister for Africa, said: "It is only from these locations that we support exports, subject to ongoing monitoring. From all other Marange mines, the UK and the EU continue to strongly oppose the resumption of exports until independent, international experts deem them to comply with the KP."
Critics have said it is a weak proposal.
Annie Dunneback of the advocacy group Global Witness said of the EU proposal: "It is the latest in a series of deals that have cast aside the principle of exports for progress and pandered to the demands of the Zimbabwean government."

Grace and “the Inverted Pyramid”
Église orthodoxe Pères, la richesse et le capitalisme
Fathers of Church & Capitalism : Interest, Usury, Capitalism
The holy anarchists... in the Egyptian Desert
Orthodox Mission in Tropical Africa (& the Decolonization of Africa)
LIVE, BEYOND THE LIMITS!
«African needs to be helped, to find his divine roots, for his soul to be at peace, to become united with God...»
Αναρτήθηκε από ΝΕΚΡΟΣ ΓΙΑ ΤΟΝ ΚΟΣΜΟ στις 3:02 π.μ.