“The dollar has an exchange rate against the dollar. How is that possible? I think it’s another Zimbabwean first” 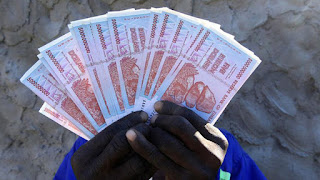 IN Zimbabwe—the country that once suffered 500 billion percent inflation—one dollar may now cost you as much as $1.07.
A shortage of banknotes is resulting in a new black market more than seven years after Zimbabwe abolished its own money, the Zimbabwean dollar, and adopted the greenback and other foreign currencies to avoid exactly that sort of unofficial trading. The shortage of cash has intensified in recent weeks, according to central bank Governor John Mangudya, forcing banks to limit withdrawals and shut down some ATMs.
Zimbabwe implemented a multi-currency system in 2009 after its economy collapsed in the wake of a campaign to seize white-owned commercial farms and hand them over to black subsistence farmers, triggering a near decade-long recession as exports from tobacco to roses slumped.
As well as the dollar, the country allows the use of a range of currencies including the South African rand, the Chinese yuan, the pound and the euro. While that tamed inflation—said by the International Monetary Fund to have reached 500 billion percent in 2008—it also left the government short of cash to pay civil servants and buy essential imports.
In desperation, Zimbabwe’s central bank said last month it will introduce legal tender it calls “bond notes,” pegged to the U.S. currency, a plan that has drawn scorn from critics who say it will simply force importers and remittance-senders to the black market. It also means dealers are effectively trading the dollar against itself.
“The black or parallel market will worsen when bond notes begin to circulate,” said Kipson Gundani, chief economist with the National Chamber of Commerce in Harare, the capital. “Why? Because Zimbabwe is a net importer and bond notes can’t be used to settle invoices abroad. With no cash in the banks, importers will be forced to look for greenbacks on the black market.”
With about 3 million citizens out of a population of 14 million living abroad, according to the United Nations, Zimbabweans have devised inventive ways of sending remittances to family members at home.

Patson Gureva, a manager with a South African bank, tries to send $1,500 a month to his mother in rural Zimbabwe. Gureva has a friend in Harare who imports vehicle parts from South Africa, so Gureva pays his friend’s supplier in Johannesburg in rand and Gureva’s friend hands the equivalent in dollars over to his mother.
The system worked well, and sidelined money transfer businesses like Western Union, Moneygram and Mukuru. But then last month, Gureva’s friend in Harare deducted 5%. The rand equivalent of $1,500 became $1,425—a big difference in a country where as many as 70% of people live on less than $2 a day, according to the U.N.
Trading the dollar against itself could lead to inflation, according to Harare-based independent economist John Robertson.
“We already have people trading the dollar at a premium,” he said. “We don’t know where the money has gone, but there’s a probability that government used the bulk of it in trying to settle its International Monetary Fund loans, then there’s the huge civil-service wage packet,” which accounts for 80% of government spending, he said.

Gureva isn’t the only one paying a premium for hard cash. Samuel Chiweshe, who manufactures garden furniture and relies on imported raw materials, had a similar experience.
“That 5% rate is lucky,” Chiweshe said. “I just paid $1.07 per dollar for a $2,000 transaction, because my steel supplier is now accepting only hard cash and has already warned me that they won’t accept bond notes. So, now I’ve raised my prices 7%, but will I be able to sell? I’m doubtful.”
Capital flight, money laundering and rising imports have forced the central bank to double its purchases of dollars to $40 million a month, Governor Mangudya told a conference in Harare last month. The government is delaying, and staggering, civil-servant salary payments to alleviate the cash crunch.

One solution would be for the country to use the South African rand as its primary currency, Charity Jinya, president of the Bankers’ Association of Zimbabwe, told lawmakers in Zimbabwe’s capital Monday. Currently the U.S. dollar accounts for about 95% of trade, she said. South Africa is Zimbabwe’s biggest trading partner, according to the central bank, accounting for 22% of imports.
For now, that makes little difference to people like Chiweshe and Gureva.
“It’s strange, really strange,” Gureva said. “The dollar has an exchange rate against the dollar. How is that possible? I think it’s another Zimbabwean first.”