Momentous statements by the Metropolitan Alexander of Nigeria, in the cadre of the Holy and Great Synod of the Orthodox Church 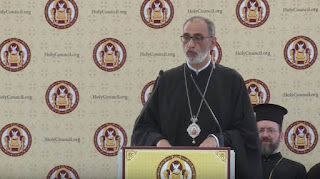 In the cadre of the Holy and Great Synod of the Orthodox Church, which is taking place at Kolymbari of Chania, Crete (Greece) in mid June 2016, with the participation of almost all the Orthodox Churches of our planet, the Orthodox Metropolitan Alexander of Nigeria, Press representative of the Patriarchate of Alexandria and All Africa, spoke openly at a Press conference on the contemporary economic exploitation of Africa.

The occasion for this statement was the Synod’s official text on the subject «The place of the Orthodox Church in the modern world».

The Metropolitan of Nigeria said:
«For us, it is of great importance that the comments on matters of international economy be expounded in detail.  Our Continent is plagued by the consequences of free economy and neo-liberalism.  These may not be included in the text, but the opportunity is provided for us to become more denunciatory of certain phenomena. You can rest assured that this will happen, very, very soon».

He continued, by stressing that the Church of Africa will demonstrate «the connection between the economy and AIDS – that the spread of AIDS is clearly the consequence of poverty.
«For us, an extremely important matter is the role of the International Bank, the role of the European Union and their ties to the local governments.  We ask ourselves – and we desire to inform everyone – how much did our peoples, the peoples of Africa, actually achieve independence after 1960, or have they remained under a regime of dependence and of economic colonization?


Orthodox Mission in Tropical Africa (& the Decolonization of Africa)
«African needs to be helped, to find his divine roots, for his soul to be at peace, to become united with God...»
Orthodox Church & Capitalism: Orthodox Fathers of Church on poverty, wealth and social justice

Is capitalism compatible with Orthodox Christianity?
The orthodox old beggar who helps orphans
Grace and “the Inverted Pyramid”

Pray for the peace in Nigeria & all Africa...