And yet, the Orthodox Church have saints in South Africa & in the whole of Sub-Saharan Africa...


All Saints of Africa


Today we commemorated all the saints of Africa, and one of the things that stuck me is that there are so very few recent ones.
In the Orthodox Church the Sunday after Pentecost is All Saints day (that makes the Saturday after Pentecost Hallowe’en) and the following Sunday all the saints of a particular coutnry or region are commemorated.
And one of the sad things about it is that there are so few saints in Africa after the 4th century.

There are lots of saints who died in the 3rd and 4th century persecutions, and some notable 4th century saints: theologians like St Athanasius, who was mainly responsible for eht Nicene Creed, which forms the first part of the Symbol of Faith. Monastic pioneers like St Anthony and St Pachomius. Missionaries like St Frumentius.
But after that, very few and none that I know of in Southern Africa. They’re all north of the equator.
One of the better-known recent ones is St Nektarius of Pentapolis (icon). But guess what — we kicked him out.
He was bishop of Pentapolis, and some of his colleagues denounced him to the Patriarch, and he was deposed. He was actually declaried a saint by the Patriarchate of Constantinople.
Perhaps that is why there are so few — the ones that the Lord does send us we treat so badly that he is perhaps reluctant to send any more.

Note of our blog:


Dear Brother,
And yet, the Orthodox Church does, in fact, have saints in South Africa!
Who are they?
a) They are the Orthodox Christians of South Africa, who observe Christ's commandments, who pray and participate in the holy sacraments of the Church that He delivered to us, who live with pure hearts that are filled with humility and love, like little children - or are striving to make their hearts pure, by fighting against their passions and their sins, as taught by Jesus Christ, the Apostles and the holy Fathers.
b) They are also the Orthodox Christians of South Africa who are toiling to transmit the message of the Orthodox Church to their fellow-man by translating texts, writing books and articles etc., their sole motive being their sincere love and the desire for the salvation of all mankind.
Orthodox Christians do not have to become martyrs in order to be saints, because the Orthodox Church is the Church in which man is united with God, in Christ. It is the Church of sanctification.
In the whole of Sub-Saharan Africa there are certainly very many saints in our time, just as the ancient Orthodox Church had many saints in northern Africa.
In the future I am certain that God will reveal the holiness of many contemporary Africans who are Orthodox Christians, after their dormition, and the Church will accordingly recognise them officially in due course, to the glory of God and the benefit of mankind.
We do have respect for the roman catholic, the protestant and the coptic martyrs of course, and we have them as shining examples. It is our wish that the Lord places them also among the Saints. We lovingly invite our roman catholic and protestant brethren to research all the sources of the ancient, original Christian faith, and eventually return to their true spiritual home - the Orthodox Church - as have many others before them. Amen. 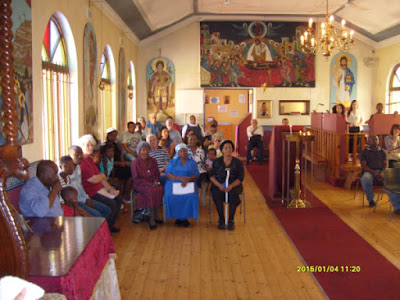 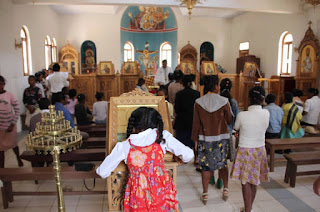 Malagasy faithful at the Divine Liturgy - photo from the article Serving the people in Madagascar - Poverty, animism, bandits & Panayiotis, a boy who «ceased coming to church»... 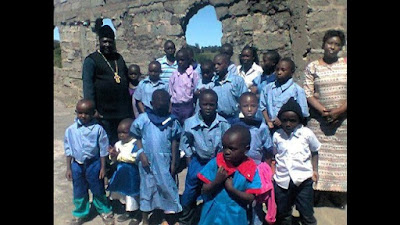