Guns amid poverty: the defence industry’s new ‘Scramble for Africa’ 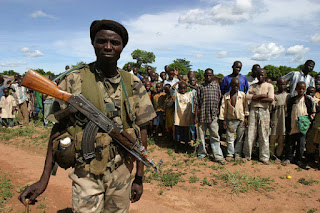 In a strange parallel to the great nineteenth century’s ‘Scramble for Africa’, the world’s poorest continent is set once again to become the object of fierce Western competition. However, whereas Cecil Rhodes and Rudyard Kipling waxed lyrical about colonial possessions and the ‘White man’s burden’, today the prize takes the form of lucrative defence contracts and licenses for the local manufacture of hardware. As you might imagine, this is a very different ‘scramble’ altogether.

Africa, which accounts for twenty percent of the world’s landmass and approximately fifteen percent of its population, is expected to spend over $20bn on defence projects over the next decade. As the European defence market becomes ever more bereft of big spenders and Asian markets face strong competition from China, Africa’s 54 states will constitute the last major geopolitical frontier for defence companies.
A significant majority of the weapons and military vehicles currently found in areas such as the Congo, Rwanda and Somalia are antiquated and relatively primitive. In many cases, Soviet assault rifles and rocket-propelled grenades (RPGs) are the most easily obtained weapons, and derivatives of the famed Kalashnikov AK-47 rifle remain the most common feature of those arsenals outside of NATO’s remit.
In fact, a Nigerian news source suggests that ‘At least 70 million [are] in circulation around the world’, lamenting that ‘millions…have cluttered Africa’. It is of little surprise that ‘countries such as China and the Ukraine continue to hawk their stockpiles’ to African militias at cut-down prices; anything to be rid of old wares.
Perhaps the most dangerous element of these weapons is their pure simplicity, resulting in almost miraculous durability. The AK-47 is famed for being ‘nearly indestructible’, and can allegedly be buried under ground for years and still operate with virtually no maintenance. Clearly there is a considerable problem with the prevalence of cheap arms on a mass scale, but amid this on-going concern is a growing security challenge likely to add fuel to the fire.
At the end of last month, Defense News reported that with the spread of ‘terrorists and Islamic militants’ from the Middle East to Africa, governments will soon require greater defence capabilities to guarantee security. Analysts have pointed to the National Movement for the Liberation of Azawad (NMLA), an insurgent group in Mali believed to hold links with Al Qaeda, as an example of the future trend that may overwhelm susceptible states. At the more extreme end of the scale is groups such as Ansar Dine (‘Defenders of Islam’ in Arabic), a fundamentalist militia operating in Mali that calls ‘for the national imposition of Sharia law’.
French military involvement has perhaps been an indication of just how serious the threat to local security is, and Europe will certainly be looking to contain the problem. With gentle coercion, African defence ministries will look to negotiate ‘better firepower, improved armed mobility and stronger force protection’ as the danger becomes more widespread.
South Africa has been a pioneer during this new wave of interest, and has allegedly negotiated licensing deals with ‘Swiss, US, Russian, Brazilian, Malaysian and French companies.’ Local rifle producer Truvelo has partnered with Colt Defense, the famed American arms manufacturer, to produce sniper rifles that meet increased ‘police and military’ demand. A similar deal was penned between South African aerospace company Denel and Swiss firm B&T ‘paving the way [for the production of] small arms ranging from sub-machineguns to grenade launchers’.
In other regional deals, Algeria is interested in purchasing armoured vehicles from Turkish company Otokar, whilst last year the Serbian Military Technology Institute negotiated with the Kenyan government for armoured vehicles and artillery. Ammunition factories are to be established in Libya and Egypt, and other deals for hardware with Sudan and Somalia are in the pipeline. Fundamentally, African governments will be looking to ‘protect newly found on-shore and off-shore hydro-carbon resources, such as natural gas and petroleum’.
Whilst there is undoubtedly considerable demand for state-of-the-art weaponry in the region, and governments are well within their rights to improve the security of their national interests, large-scale arms deals do raise questions over the future of a continent already stricken with poverty and secular violence. Defence contractors will understandably always be looking to increase profits and expand their trade, but it is uncertain how much ethical consideration is given before technology is handed over.
It is concerning that so much government money will be invested into arms deals when the UN has warned that 22 of the 24 lowest Human Development Index nations are in Sub-Saharan Africa, and in some instances GDP per capita is less than $200 a year. However, pumping aid into the region is not necessarily the answer. A 2005 report suggested that a staggering proportion of the $500bn of aid sent to Africa over the last forty years has been embezzled through corrupt institutions; the so-called ‘leaky begging bowl’. It would be interesting to know how much of this will fund armaments over the next decade.
On face value, at least, it seems irresponsible to hand over so much destructive technology when the proliferation of small arms is already of major concern. Yet, as seen among the BRICs, Africa’s emerging states are looking to exert influence on the global stage and sustain the regional balance of power. The extremes of religious fundamentalism, previously a threat associated with Western foreign policy, will now have a much greater impact on countries such as Mali and Egypt. Considerable assurances will be required that governments will not allow their purchases to fall into the hands of dissident groups.
The West’s ‘burden’ has become an unforgiving exercise in addressing Africa’s chronic deficiencies, whilst also providing it with the tools to foster instability. It is, of course, naive to think that disarmament is either realistic or desirable, but the situation in Africa is a complex web of security, poverty and exploitation. Perhaps the UN’s adoption of the Arms Trade Treaty this year after twenty long years of deliberation will go some way toward reversing the problem. It sets out to ‘prohibit states from transferring conventional weapons to countries when they know those weapons would be used to commit or facilitate genocide, crimes against humanity or war crimes’.