The Vespers of Love (& "Christ is Risen" in different languages) 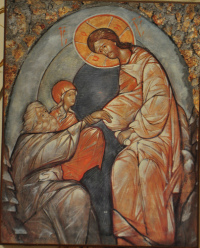 Holy Week and Pascha is always a busy time for us, rushing to get to different services. to prepare things and so on. But it ends with the Vespers of Love on Easter Sunday evening, which is always relaxed and quietly joyful.
This year was no exception. We had got home from the Easter Vigil at 4:00 am, up again at 7:00 to go to the Hours and Readers Service at Atteridgeville at 9:00. That was shorter than usual, because the Hours of Pascha are much shorter, and there’s a lot more singing.
Then at 4:45 we set off for the Vespers of Love at St Nicholas of Japan Church in Brixton, which we always think of as our “home” parish, since we were among those who started it 30 years ago. Even the drive down was more relaxed and leisurely. There was time to enjoy the sunset at Midrand while waiting for the robot to change. Val says Midrand sunsets are always spectavular because it has a big sky — Midrand is the highest part of Gauteng, so in many places the horizon is lower than your viewpoint. 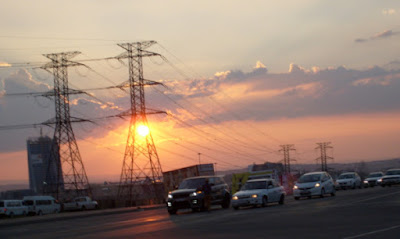 At Vespers the church is usually dimly lit, except at the Entrance, where we sing about beholding the light of evening. But for the Vespers of Love and the rest of Bright Weak (Easter Week) it is brightly lit all the way through, and the doors on the ikonostasis are always open, symbolising the empty tomb. 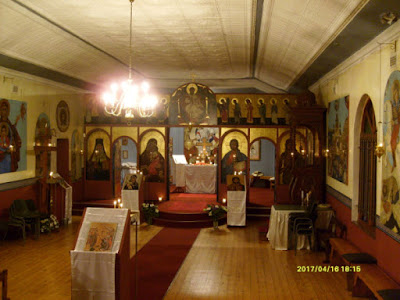 During Vespers we read the Gospel story of Jesus meeting the disciples after the resurrection, when Thomas was absent, and it is read in as many different languages as one can find people to read. This year there were fewer languages than usual, only about 7. I think the most we ever had was 19, including Mandarin, read by a former parishioner, Michael Gluckman, whose business included trading with China, where he spent quite a lot of time.
This time I was also serving with Deacon Irenaeus (Brian) MacDonald, for whom St Nicholas was also a “home” parish, though now most Sundays he, like us, serves elsewhere. So here’s a picture of two aged deacons. And, as also usually happens at the Vespers of Love (Agape Vespers), people seem to hang around chatting for a long time afterwards. 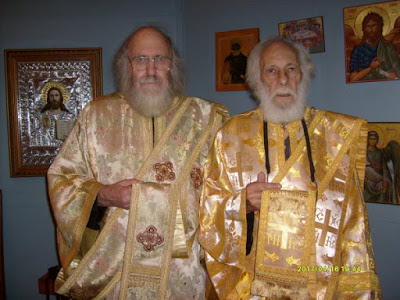 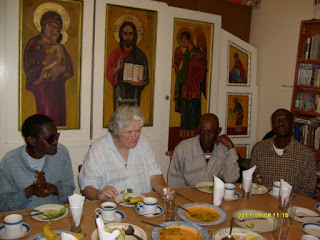 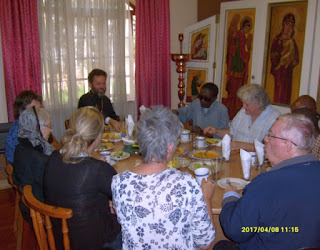 A voice from Orthodox Christian Africa: "The hopeful message of Resurrection: with power, solidarity with fellow human beings, faith and optimism, we will find the way out of the terrible ordeal!"
PAASBOODSKAP VAN DIE PATRIARG
PASCHAL ENCYCLICAL 2017 OF THE POPE AND PATRIARCH OF ALEXANDRIA AND ALL AFRICA THEODOROS II
Easter orthodox baptisms in Kinshasa (Democratic Republic of the Congo)
Baptêmes à Bunia, dans l' Est du Congo


The Death of Christ and the Life of Man...
Holy Fire
Jesus and the deads - The Icon of Resurrection or The descent into Hades
We and the spirits of departed
"Christ est ressuscité des morts": Africaine de Pâques orthodoxe 2016 - African Orthodox Easter (Pascha) 2016
De Pâques à la Pentecôte
Tuesday after Easter: Sts. Raphael, Nicholas and Irene the Wonderworkers, the Newly-Revealed Martyrs of Lesvos