The siege at the Hotel Splendid in Burkina Faso's capital, Ouagadougou, ended on Saturday morning, leaving at least 23 people dead, but fighting continued at another hotel and a restaurant nearby.
Burkinabè troops, backed up by French special forces, freed 126 people from the Splendid and were trying to take the Yibi hotel and Capuccino restaurant from fighters of the al-Qaida-linked group Al Mourabitoune. 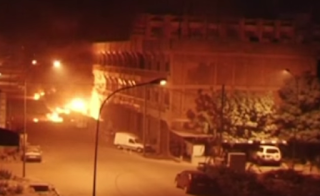