Is Burundi really on brink of a bloodbath? 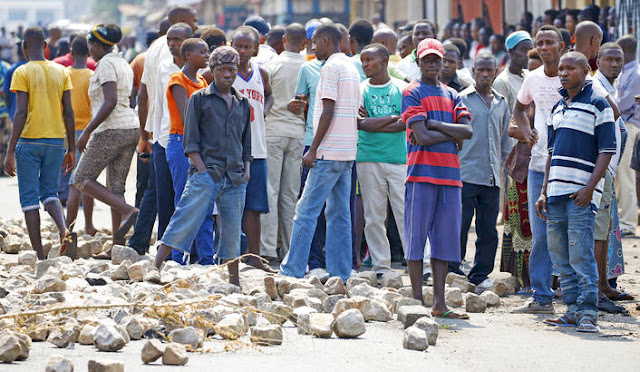 Photo: Protestors gather next to rocks strewn on a street in Bujumbura's Niyakabiga district on presidential election day in Burundi, July 21, 2015. REUTERS/Mike Hutchings

04 Aug 2015
Two nights in Bujumbura, two assassination attempts on high-profile figures. One succeeded, while the other failed. But together these add up to bad news for the troubled East African nation, as hopes for a peaceful resolution dim further and the international community runs out of ideas.

By SIMON ALLISON.
Daily Maverick
Over the past few months, as President Pierre Nkurunziza tightens his grip on power and his opponents seek to resist him, the residents of Bujumbura have become increasingly used to the sound of gunfire at night – and the reports of deaths in the morning. But even by Burundi’s increasingly low standards, the attacks on two high-profile figures from opposite sides of the divide came as a shock. Burundians can only hope these are not a harbinger of things to come.

The first attack was on Sunday evening. General Adolphe Nshimirimana, a colleague and confidante of the president, was attacked in his car by men in military uniforms. The general was killed, as were his bodyguards.

Nshimirimana wasn’t just any old general. He was Nkurunziza’s right-hand man, his war buddy, perceived by many to be the power behind the throne. Whoever killed him – and speculation ranges from disgruntled military officers to armed opposition to plots from within the inner circle itself – struck a devastating blow against the heart of the regime.

The second attack was on Monday evening. Human rights activist Pierre Claver Mbonimpa was also in his car, near his home, when he was surrounded by motorcyclists who fired into the vehicle. Mbonimpa didn’t die, but he was seriously injured and rushed to hospital. It’s believed his injuries are not life-threatening.

Mbonimpa wasn’t just any old human rights activist (although there are precious few of them left in Burundi). “I would say he is Burundi’s leading human rights activist, very much respected and admired and loved by the population … He has a lot of charisma, has refused to be intimidated, has been threatened by all sides, but he’s carried out his work regardless and I think the authorities just can’t handle that,” said Human Rights Watch researcher Carina Tertsakian, who specialises in the region. Mbonimpa was also a leading critic of Nkurunziza’s decision to run for a third term in office.

Whether by coincidence or design, there’s something ominous about the symmetry of these assassination attempts. It’s hard to escape the feeling that they presage a new and disturbing chapter. “Up until now I’ve been resisting the more alarmist interpretations of what’s been going on, but in the last few days the situation is really spinning out of control. These two dramatic and quite shocking incidents are a sign that the violence is likely to escalate. I don’t want to predict too much gloom and doom, but these are two high-profile individuals,” said Tertsakian.

Her fears are echoed by the Crisis Group’s project director for Central Africa, Thierry Vircoulon. “The re-election of Nkurunziza has put Burundi on the path of war. It sent the signal to the opposition that there is nothing left to negotiate after his re-election and all they can do is to accept his ‘victory’. As a result, the opposition is trying to unite on the political front (with the creation of an opposition coalition in Addis Ababa) and some parts of the opposition have opted for the armed struggle and decided to strike at the top of the Burundian regime’s power system. The change of the pattern of violence, from street demonstrations to targeted assassinations of top leaders, is a clear sign of the things to come,” he said.

While the signs aren’t good, it’s important to note that the violence is still relatively small-scale and targeted. Burundi has yet to become the bloodbath some have been predicting. Comparisons with Rwanda in 1994 remain off the mark – for now. “What you see now is really very similar to what you saw following 2010 elections. But concern is that you have high level targets, compared to mid to low level targets previously,” explained Yolande Bouka, senior researcher with the Institute for Security Studies. “Until you see an escalation of violence in the street, in up-country violence, then we’re not at the worst case scenario.”

Naturally, attention turns to what comes next, and specifically what can be done to prevent that worst case scenario. Options are dangerously limited for the international community, which remains reluctant to be drawn into a costly, open-ended military intervention and is hamstrung by its reliance on Burundian soldiers to keep the peace in Somalia. Even worse, the measures already taken are failing: neither the East African Community nor chief mediator Ugandan President Yoweri Museveni have been able to make any headway in negotiations. And while the African Union has been vocal in its condemnation of the assassination attempts, its military observers – deployed only late last month – have been powerless to prevent the violence.

The last word goes to Domitille Kiramvu, who reported from Burundi for Deutsche Welle until she was forced out by the violence. In a moving op-ed, she describes just how chaotic the situation remains – and, in these circumstances, how easily power comes and goes: “In such choppy waters, more or less everybody believes they can lay their hand on the tiller. Former henchmen who helped create the repugnant apparatus of repression now cloak themselves in innocence. Former politicians choose to remember their past deeds in a positive light, forgetting that the people rejected them for their authoritarian and tyrannical excesses. New arrivals to Burundian politics promise everybody everything. There is little appealing or pleasant about those campaigning for change in our country. One can only hope that with the passage of time political realism will triumph over the villainy, egotism and thoughtless speculation. May statesmanship and self-control eventually prevail.” DM

Note of our blog: The police officer Spiros Hagabimana was arrested in Bujumbura because he refused to use force against demonstrators. His life is in danger. More here (in Greek). His Facebook page is here. 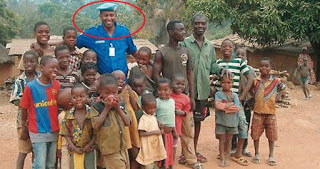 See here for news & articles from the Orthodox Diocese of Burundi & Rwanda.