Two voices about the Sunday of the Paralytic (4th Sunday of Pascha), from Kenya & Zimbabwe


2017.05.07. Sunday of the Paralytic. Sermon by Bishop Athanasios of Kisumu and West Kenya


Russian Orthodox Cathedral of St John the Baptist in Washington, DC
More in our post About Kenya, Education, Children & Mission... 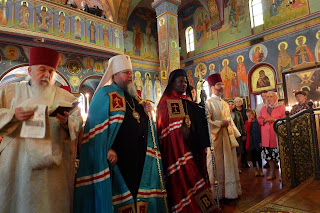 Bishop Athanasius Akunda of Kisumu and Western Kenya during a recent visit to St. John the Baptist Cathedral in Washington, DC (more here) 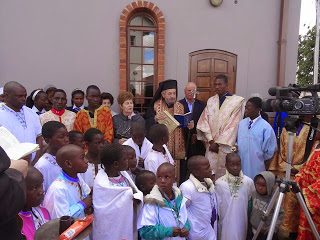 In today’s Gospel extract, our Church refers to one of the important miracles of Christ, the healing of the Paralytic of Jerusalem.
The important issues, which are associated with this miracle, are as follows:
Firstly, the Paralytic does not have anybody to push him into the pool in order to be healed. It is truly grievous for someone who is suffering not to have someone to take care of him. This is why Christ told us that when we take care of and help a person who is without any help and is in need of our assistance, it is as if we serve Him and in this way we become worthy of the heavenly kingdom.
It seems that sometimes we must be deprived of something so that we can appreciate it. So, instead of thanking God for the people that we have next to us in the family, in the work place, in our social dealings, even in Church, we disappoint them, we upset them, we make them ill and when suddenly that someone departs prematurely from our circle, then we indeed begin to cry for him and to honor him with an impressive marble Cross on his grave. This is hypocrisy. We must show our respect and our love to the persons we love making an effort not to upset them nor to disappoint them.
Every time we want to do something as individuals, we must consider what is good for our family and every family should ponder what is good for the broader society. Whatever is good for the family is also good for the persons who constitute it. And whatever is good for our society is also good for the families which constitute it.
By giving priority to the common good, we protect ourselves as much as our families and the broader society in which we live. When this does not happen, social injustices are encouraged; poverty exists as well as unemployment, crime, dangerous illnesses and generally a lack of security and an absence of respect for life itself as a gift from God, which no one has a right to harm.

A second important issue which is associated with the miracle of the Paralytic in today’s Gospel extract, is that the perpetration of sin, as a result of wrong choices made by man, brings upon himself health problems, pain and misfortune and finally death.
The worst thing however is that with the perpetration of sin, a person does not only harm himself, he also harms his family and the broader society.
So, our deeds as individuals have a social character. If our deeds and life are just and right we protect ourselves and our family and the broader society.
Consequently, our deeds and the quality of our life influence the world in which we live.
Our indifference to society’s social problems like poverty, unemployment, crime and aids is as if we participate in their becoming worse. Our attitude must be dynamic. Firstly with our prayers for God to enlighten us how to help and then, with God’s help and the spiritual guidance of our clergy, we must try to participate in their solution. That which we can do today, let us not leave for tomorrow. 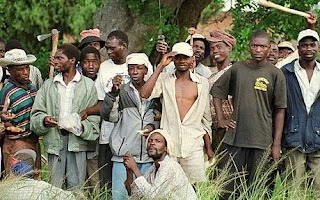 Warveterans from Zimbabwe. Photo from here.

Before we ourselves become victims of the great social problems which the broader society in which we live faces, we must react with trust and confidence in the pastoral directions of our Church, supporting its pastoral, catechistic, didactic, philanthropic and missionary work.
Christ’s instigation towards the Paralytic in the Gospel “see, you are well again. Stop sinning or something worse may happen to you”. (John 5:14) applies to all of us.
It is an open invitation to each one of us so that we might live in a better world with security and love and justice which lead to us to the Heavenly Kingdom.
A third important issue which is associated with the miracle of the Paralytic of today’s Gospel extract, is the vivid witness which the cured Paralytic henceforth gives concerning Jesus Christ’s Divinity so that he himself can contribute resolutely in the salvation of other people.
Therefore, in whatever his fellow human beings failed to do for him for 38 years, to push him into the pool of Jerusalem so that might be healed, he without holding any malice against anyone, tries to help his fellow human beings to be saved.
Hence, the thought that no one did anything for me and so why should I concern myself with the problems of others, is an erroneous thought which freezes our love and our responsibility to help our fellow human beings whose problems finally come as a torrential flood which drowns us.
Therefore, the social problems of poverty, unemployment, crime and aids henceforth also threaten our peaceful life.

Finally, the miracle of the Paralytic is associated with today’s Gospel extract. Miracles performed by Christ can also be performed by those who follow him consistently in their lives, as happened with His holy disciples as in the circumstance that follows today’s Gospel extract when the Apostle Paul heals Anias and Tabitha.
Similar miracles where performed by the Saints of our Church. We can also live similar miracles with our daily prayers to Christ and when we live according to the Divine Commandments, when our life is holy, like the lives of the Holy Apostles and those of the Saints of our Church.

The fourth Sunday of Holy Pascha is observed by the Orthodox Church as the Sunday of the Paralytic. The day commemorates the miracle of Christ healing a man who had been paralyzed for thirty-eight years. The biblical story of the event is found in the Gospel of John 5:1-15.
Background

Close to the Sheep's Gate in Jerusalem, there was a pool, which was called the Sheep's Pool. It had five porches, that is, five sets of pillars supporting a domed roof. Under this roof there lay very many sick people with various maladies awaiting the moving of the water. The first person to step in after the troubling of the water was healed immediately of whatever malady he had.
It was there that the paralytic of today's Gospel was lying, tormented by his infirmity of thirty-eight years. When Christ beheld him, He asked him, "Will you be made whole?" And he answered with a quiet and meek voice, "Sir, I have no man, when the water is troubled, to put me into the pool." The Lord said unto him, "Rise, take up your bed, and walk." And straightaway the man was made whole and took up his bed. Walking in the presence of all, he departed rejoicing to his own house. According to the expounders of the Gospels, the Lord Jesus healed this paralytic during the days of the Passover, when He had gone to Jerusalem for the Feast, and dwelt there teaching and working miracles. According to Saint John the Evangelist, this miracle took place on the Sabbath.
Icon of the Sunday of the Paralytic 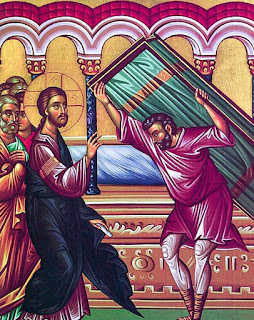 The icon of the Sunday of the Paralytic depicts the biblical story of the Christ healing the paralytic. Our Lord, accompanied by His disciples, is shown blessing the paralytic. The man has risen and taken up his bed as commanded by Christ. The paralytic is bowing toward the Lord in reverence and in gratitude for the great miracle that has been done. In the background of the icon is the pool where the infirmed came for healing.
Orthodox Christian Celebration of the Feast of the Sunday of the Paralytic

The Sunday of the Paralytic is celebrated with the Divine Liturgy of Saint John Chrysostom. On this Sunday and throughout the Paschal period until the Apodosis or leave-taking of Pascha, the day before the Feast of the Ascension, the services begin with the chanting of the troparion of Pascha, "Christ is risen..."
Scripture readings for the feast are the following: At the Divine Liturgy: Acts 9:32-42 and John 5:1-15.
Hymn of the Feast
Kontakion (Third Tone):
I am grievously paralyzed in a multitude of sins and wrongful deeds. As You raised up the paralytic of old, also raise up my soul by Your divine guidance, that I may cry out, "Glory to Your Power O Compassionate Christ."
References
Reading selection courtesy of Holy Transfiguration Monastery, Brookline, MA
Icon of the Healing of the Paralytic used with permission from Theologic

LIVE, BEYOND THE LIMITS!
The Way - An introduction to the Orthodox Faith
Theosis (deification): The True Purpose of Human Life
Theosis, St. Silouan and Elder Sophrony