A family of slaves opposes an Empire: the Holy Martyrs Zoe & Hesperus, and their children sts Cyriacus & Theodulus (May 2)

"For you were called to freedom, brothers. Only do not use your freedom as an opportunity for the flesh, but through love serve one another" (Apostle Paul, Galatians 5:13). 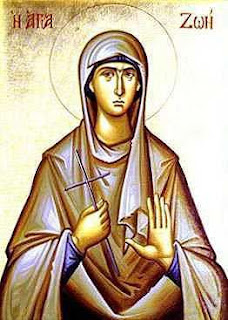 The Holy Martyr Zoe was the wife of Saint Hesperus, and they suffered in the second century, during the persecution under Hadrian (117-138). They had been Christians since their childhood, and they also raised their children Cyriacus and Theodulus in piety. They were all slaves of an illustrious Roman named Catullus, living in Attalia, Asia Minor. While serving their earthly master, the saints never defiled themselves with food offered to idols, which pagans were obliged to use.
Once, Catullus sent Hesperus on business to Tritonia. Saints Cyriacus and Theodulus decided to run away, unable to endure constant contact with pagans. Saint Zoe, however, did not bless her sons to do this. Then they asked their mother’s blessing to confess their faith in Christ openly, and they received it.
When the brothers explained to Catullus that they were Christian, he was surprised, but he did not deliver them for torture. Instead, he sent them with their mother to Saint Hesperus at Tritonia, hoping that the parents would persuade their children to deny Christ. At Tritonia, the saints lived in tranquility for a while, preparing for martyrdom.
All the slaves returned to Attalia for the birthday of Catullus’ son, and a feast was prepared at the house in honor of the pagan goddess Fortuna. Food was sent to the slaves from the master’s table, and this included meat and wine that had been sacrificed to idols. The saints would not eat the food. Zoe poured the wine upon the ground and threw the meat to the dogs. When he learned of this, Catullus gave orders to torture Zoe’s sons, Saints Cyriacus and Theodulus.
The brothers were stripped, suspended from a tree, and raked with iron implements before the eyes of their parents, who counselled their children to persevere to the end.
Then the parents, Saints Hesperus and Zoe, were subjected to terrible tortures. Finally, they threw all four martyrs into a red-hot furnace, where they surrendered their souls to the Lord. Their bodies were preserved in the fire unharmed, and angelic singing was heard, glorifying the confessors of the Lord.

Theosis (deification): The True Purpose of Human Life (a part from here)

"...Unfortunately, there exists ignorance in people outside the Church, but also in many within the Church, because they assume that the purpose of our life is, at best, simply moral improvement, to become better men, whereas this is not what is given to us by the Gospel, by the Tradition of the Church, and by the holy Fathers: that man should only improve, become more moral, more just, more self-controlled, more mindful. All these must be done, but they are not the great purpose, the final purpose for which our Maker and Creator formed man. What is this purpose? Deification (gr. theosis) – for man to be united with God, not in an external or a sentimental way, but ontologically, really.
This is how high Orthodox anthropology places humanity. If we compare the anthropologies of all the philosophies, social and psychological systems with Orthodox anthropology, we will ascertain very easily how poor these are; how they fail to respond to man’s great yearning for something very great and true in his life.
Since man is ‘called to be a god’, i.e. he was created to become a god, as long as he does not find himself on the path of deification (gr. theosis) he feels an emptiness within himself; that something is not going right; he feels no joy, even when he is trying to cover the emptiness with other activities. He may numb himself, create a fancy world, but at the same time poor, small and limited, and cage and imprison himself inside it. He may organise his life in such a way that he is never quiet, alone with himself. He can try, through noises, tension, television, radio, continuous information about this and that, as if with drugs, to forget, to not think, not worry, not remember that he is not on the right path, that he has strayed from his purpose.
In the end, however, the wretched, contemporary man finds no rest until he finds that ‘something else’, the greatest thing that actually exists in his life, the truly beautiful and creative...".

The Church as the Liberated Zone: "All we Christians are terrorists..."
Fr. Moses Berry, a descendant of African slaves, Orthodox priest and teacher in USA
Mother Maria from Uganda
Brotherhood of St. Moses the Black
Orthodox Women Saints

The Kingdom of Heaven, where racial discrimination has no place
The Heresy of Racism 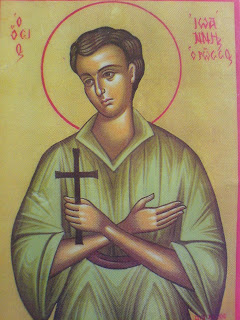 St John the Russian, the Wonderworker, a free slave in 18th century (icon)
How “White” is the Orthodox Church?
Ecumenical Patriarch Opposes American Slavery in 1862
Ferguson, MO vs. Malcolm X: Are We Chasing Our Tails? - It is time for us all to come home...
Greek Orthodox Archbishop Iakovos of USA, Martin Luther King Jr. & Reverend James Reeb
Orthodox Mission in Tropical Africa (& the Decolonization of Africa)
LIVE, BEYOND THE LIMITS!

The Orthodox Church in Angola, st. Eleftherios (the "Man of Freedom") & st. Paisios of Holy Mount
Orthodox South Africa (tag in our blog)
Orthodoxy in South Africa before and after Apartheid