Africa Day (formerly African Freedom Day and African Liberation Day) is the annual commemoration of the foundation of the Organisation of African Unity (OAU) (now known as the African Union) on May 25, 1963. It is celebrated in various countries on the African continent, as well as around the world.

Five years later, on 25 May 1963, representatives of thirty African nations met in Addis Ababa, Ethiopia, hosted by Emperor Haile Selassie. By then more than two-thirds of the continent had achieved independence, mostly from imperial European states. At this meeting, the Organisation of African Unity was founded, with the initial aim to encourage the decolonisation of Angola, Mozambique, South Africa and Southern Rhodesia. The organisation pledged to support the work conducted by freedom fighters, and remove military access to colonial nations. A charter was set out which sought to improve the living standards across member states. Selassie exclaimed, "May this convention of union last 1,000 years."[3]
The charter was signed by all attendees on 26 May, with the exception of Morocco.[4][3] At that meeting, Africa Freedom Day was renamed Africa Liberation Day.[2] In 2002, the OAU was replaced by the African Union. However, the renamed celebration of Africa Day continued to be celebrated on 25 May in respect to the formation of the OAU.[5]

Africa Day continues to be celebrated both in Africa and around the world, mostly on 25 May (although in some cases these periods of celebrations can be stretched out over a period of days or weeks).[6] Themes are set for each year's Africa Day, with 2015's being the "Year of Women’s Empowerment and Development towards Africa’s Agenda 2063". At an event in New York City in 2015, Deputy Secretary-General of the United Nations, Jan Eliasson, delivered a message from Secretary-General Ban Ki-moon in which he said, "Let us... intensify our efforts to provide Africa’s women with better access to education, work and healthcare and, by doing so, accelerate Africa’s transformation".[7]

Note: Morocco's delegation was present in an observatory capacity only, due to the attendance of Mauritania and the ongoing border dispute with that nation. 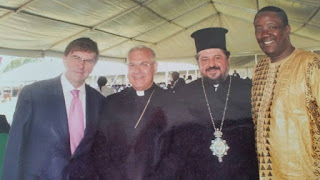 Thursday, 25th May 2017.
Zambia Joins Rest Of Africa In Commemorating Africa Freedom Day.
Mr. Lungu this morning leaded a delegation of senior government officials, former presidents, service chiefs and members of the diplomatic corps accredited to Zambia in laying wreaths at the Freedom Statue,.
Later the President will hold an investiture ceremony at State House where various people will be honored.

This year’s Africa Freedom Day is being commemorated under the theme "Harnessing the Demographic Divinded through the Investiment in the youth"
Africa Freedom Day was founded during the first Conference of Independent African States which attracted African leaders and political activists from various African countries in Ghana on April 15th 1958.

Orthodox Mission in Tropical Africa (& the Decolonization of Africa)
How “White” is the Orthodox Church?
The Church as the Liberated Zone: "All we Christians are terrorists..."
Hope for the Kikuyu (Kenya) / "The caves along the Tana River became the refuge for freedom fighters..."

"THE WAY" - An Introduction to the Orthodox Faith
Theosis (deification): The True Purpose of Human Life
Orthodox Zambia
Orthodox Malawi
The Orthodox Church in Zambia & Malawi (Orthodox Archdiocese of Zambia and Malawi)