St. Matrona of Moscow, the blind from birth and wonderworker (May 2) 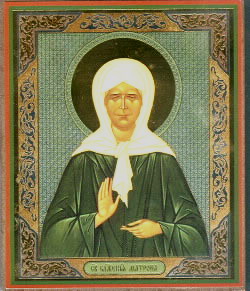 Commemorated on April 19 (May 2)
Matrona was born in 1881 into a poor family in the village of Sebino-Epifaniskaya (now Kimovski) in the Tula region of Russia. Blind from birth, she bore her infirmity with humility and patience, and God made her a vessel of grace. At the moment of her baptism, the priest saw a cloud above the child, which shed forth a sweet fragrance as a sign of divine favor. From the age of six or seven, she exhibited an extraordinary gift of insight, discerning sicknesses of soul and body in the many people who visited her, revealing to them their secret sins and their problems, and healing them through prayer and wise counsel. Around the age of fourteen, she made a pilgrimage to the great holy places in Russia along with a devout benefactress. When they arrived at Kronstadt to receive the blessing of St. John, they became lost in the crowd. St. John suddenly cried out, “Matrona, come here! She will be my heir, and will become the eighth pillar of Russia.” At that time, no one understood the meaning of this prophecy.
When she turned seventeen, Matrona became paralyzed and was unable to walk from then on. Knowing that this was God’s will, she never complained but thanked the Lord. For the rest of her life – over fifty years – she lived in a room filled with icons, sitting cross legged on her bed. With a radiant face and a quiet voice, she received all who came to seek divine consolation through her presence. She foretold the great misfortunes that were to sweep down upon the country after the Bolshevik revolution, placing her gift of insight at the service of the people of God. One day when some visitors commiserated with her about her disablement, she replied:

“A day came on which God opened my eyes, and I saw the light of the sun, the stars and all that exists in the world: the rivers, the forests, the sea and the whole of creation.”

In 1925 she left her village to settle in Moscow and, after her mother’s death in 1945, she moved frequently, welcomed secretly into the houses of the faithful. This was because the Communists, fearing her influence among the people, wanted to arrest her. But, every time, she had advance knowledge, and when the police arrived they learned that she had moved an hour or two earlier. One day, when a policeman arrived to arrest her, she advised him to return home as quickly as possible, promising him that she would not escape. When the man arrived home, he discovered that his wife was on fire, and was just in time to take her to the hospital. 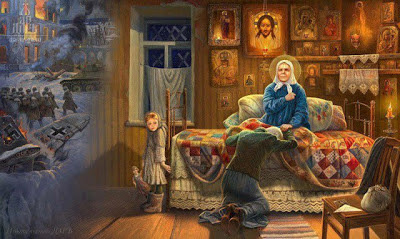 St. Matrona led an ascetic life on her bed of pain. She fasted constantly, slept little, her head resting on her chest, and her forehead was dented by the innumerable signs of the Cross that she made. Not only the Muscovites but also people from afar, of all ages and conditions, thronged around her to ask her advice and her prayers. In this way she truly became the support of afflicted people, especially during World War II. To those who came to ask her for news of their relatives in battle, she reassured some and counseled others to hold memorial services.
She spoke to some directly, and to others in parables, having in view their spiritual edification and recommending them to keep the Church’s laws, to marry in the Church and to regularly attend Confession and take Communion. When the sick and possessed were brought to her, she placed her hands on their heads, saying several prayers or driving the demons out with authority, always insisting that she was doing nothing of herself but that God was healing by her mediation. When asked why the Church was undergoing such great persecutions, she replied that it was because of the sins of the Christians and their lack of faith. “All the peoples who have turned away from God have disappeared from off the face of the earth,” she affirmed. “Difficult times are our lot, but we Christians must choose the Cross. Christ has placed us on His sleigh, and he will take us where He will.”
Having foretold the day of her death, she gave instructions for her funeral. Before falling asleep in peace on April 19, 1952, she cried out, “Come close, all of you, and tell me of your troubles as though I were alive! I’ll see you, I’ll hear you, and I’ll come to your aid.” Miracles were multiplied at her tomb and, ever since her translation to the women’s monastery of the Protecting Veil of the Mother of God (March 13, 1998), the faithful who, in their thousands, line up to venerate Moscow’s new protectress, turn to her icon and bring her their various problems as though St. Matrona were alive in front of them.

From Volume Four of the Synaxarion, compiled by the Hieromonk Makarios of Simonos Petra, Mount Athos.
See also
Male and Female Created He Them
Orthodox Women Saints
Oppression of Women in Africa