Jesus taught us to love all races 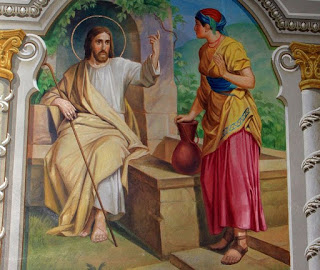 For Orthodox Christians, this Sunday's Gospel is about a Samaritan woman who goes to a well for some water. There she encounters Christ, who offers her the Living Water of the Spirit.
This passage is read during the paschal season -- the 40 days from Pascha (Easter) to Ascension -- because Pascha was historically the time when baptisms were done, so new converts had just had their own, personal encounter with Christ in the healing waters of that mystery.
In addition to this theme, however, I'll be thinking of another when it comes to the Sunday of the Samaritan: that of racial animosity and reconciliation.
For Jews such as Christ was, the Samaritans were in many ways worse than heathen (the feeling was surely mutual). Other, surrounding peoples were different enough to be deemed incapable of knowing better, but Samaritans and their claims to be the only, authentic keepers of the law cut a little too close to home.
Nothing so annoys and disturbs us as those so similar that their differences reflect on our own identity. When we're separate, what you do is your concern. But replace separation with integration, and suddenly I see myself reflected in you, which can be uncomfortable.
The Samaritan's conversion, and that of her village, is thus about more than the conversion of some random "outsiders." It offers insight into reconciliation -- a process where differences are not abolished, but the divisions that can result are overcome. 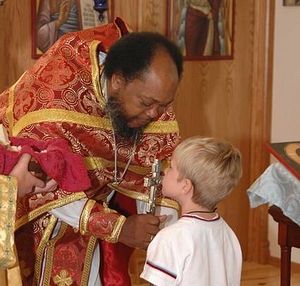 Rev. Moses Berry, Photo:
monomakhos.com
This is a powerful, and sometimes lost, message of the Gospel. I was recently renewed in appreciating it by a retreat I attended by the Rev. Moses Berry, an African-American priest of the Orthodox Church in America.
A dynamic speaker with an amazing conversion story, Berry serves a parish he founded on the Missouri farmland his family has owned since 1871, shortly after being freed from slavery. There, he's also established the Ozarks Afro-American History Museum, consisting largely of family heirlooms, many of which he shared.
Most stunning to me were the iron neck shackle, with balls and chains, that his great-grandfather was forced to wear as a slave in transit. To my astonishment, while speaking about this artifact Berry actually put it on, to demonstrate how it was worn.
Never in my life did the impact of America's slave-owning past become so real for me as when I watched an African-American Orthodox priest, dressed in clerical garb, put on the slave irons of his ancestor. And never did my thirst for reconciliation in Christ feel so strong.
What also made Berry's presentation impactful was the lack of condemnation or any guilt-tripping of people with my skin tone. This was one brother speaking to his other brothers in Christ.
I pray for Berry and his ministry, and that God raises up others from his community to become clergy in His church. And I pray that in Christ, we become one.

The realities of slavery, hopes and dreams for the African-American community for a Black Orthodox Priest in America (fr Moses Berry)
Sunday of the Samaritan woman (5th Sunday of Pascha): "Close to God is he who in his daily life becomes the light of Christ who enlightens his neighbours..."

The Sundays after Easter in the Orthodox Christian Heritage!