About the spread of cholera in Zambia (January 2018) 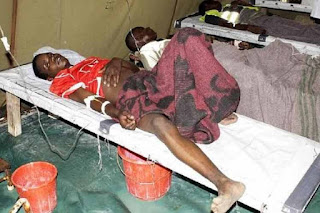 Govt bans church programs, weddings in bid to contain cholera spread , Forces to Postpone School Year in Zambia and shuts down UNZA
President Edgar Lungu has directed all the three wings of the Defence Force to join the Ministry of Health and Lusaka City Council in escalated efforts to contain the spread of cholera in the city.
Government, through the Ministry of Health, has banned all large public gatherings like overnight prayer meetings, weddings and musical concerts in a bid to contain the spread of cholera.

In a statement today, Ministry of Health Head of Communications and External Relations Stanslous Ngosa stated that banning of large gatherings of more than five people was one of the measures that had been undertaken since the defence forces joined the fight against cholera.
“Below are some of the decisions that have been made to address the problem: 1. All markets (legal and illegal) in Lusaka shall remain closed to facilitate extensive cleanup until certified clean and conducive for trading. 2. Street vending is banned in Lusaka district until further notice to allow for cleaning, garbage collection and unblocking of drainages. 3. No large public gatherings of more than five people (not being family) including church programs, weddings, music concerts, funerals, bars or such occasions shall take place in Lusaka unless cleared by the Ministry of Health of the Lusaka City Council,” stated Ngosa.
He asked members of the public to participate in the cleaning exercise.In a statement today,
Wamundila stated that UNZA would provide transport to all 10 provinces for those without means of getting home.
“Meanwhile, for those who may not have means for returning back to their homes, they are directed to get in touch with the Office of the Dean of Students for details on free transport that has been arranged to take students to all the 10 provincial headquarters,” Mr Wamundila said.
He said all students at both campuses are being directed to leave with immediate effect while staff of the University are being guided to continue operating normally.
Meanwhile, six more outlets including Pizza Hut, Debonair Pick N Pay (bakery) Woodlands, Mika Hotel restaurant and a bakery in Matero have been shut down after food samples collected showed presence of Cholera germs.
Since cholera broke out, Lusaka has recorded almost 2,000 cases with 42 deaths.