The Orthodox Church has a category of saints called in Greek anargyri (silverless ones), usually translated into English as “unmercenary physicians”. They were medical doctors who did not charge for their services, and as such they are a living reproach to the ever-expanding cult of healthcare for profit.
As Monte Asbury puts it in his blog The Least, First:


I thought I understood why insurance companies were the main threats to a “public option.” It’s easy. Their overhead—exec salaries, advertising, political lobbying, etc.—averages 31%. Medicare’s overhead is 1%. No duh they don’t want to compete.
Today, I found out there’s another reason: they mostly don’t even compete against each other. Consumers in 94% of America’s insurance markets buy their health insurance from near-monopolies that dominate their region. The Bigs don’t want to avoid public competition, they want to avoid any competition.
And what happens when profit-makers don’t have to compete? You know what.
Premiums have risen 87% over the last six years, while profits at the ten Bigs rose 428%.

Though some of the jargon may be obscure because the terms used are regionalisms, a shorthand used by people debating the issue in one country, a similar debate is taking place in many countries, including South Africa. I’m not sure what Medicaid and HMOs are, and some speak of “single payer”, but that doesn’t particularly matter. It’s not particular manifestations that are so important, and the national policies about health care, but rather the commercialisation of health care and the moral and ethical attitudes behind the principle of healthcare for profit that need to be debated. 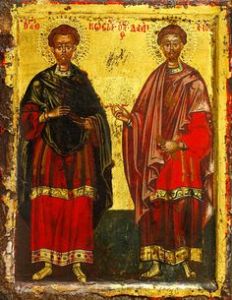 One problem with discussing this in societies that have been influenced by Western culture and modernity (and that includes South Africa) is the notion, which for some people amounts to an ideology, of separation of church and state. Religion, according to the proponents of this ideology, is a “private” matter, and should not be allowed to influence public debate. If one follows that kind of reasoning, it might be permissible for religious bodies to apologise (as some did before the Truth and Reconciliation Commission) for aquiescing in apartheid, but they should apologise even more for opposing apartheid to the extent that some of them did, because that goes against the holy cow of separation of church and state.
The problem with this secularist attitude is that it tends to make Christians participate in debates on such issues as healthcare for profit in purely secular terms, which sometimes contradict Christian ethics. The views of many Christians on this topic seem to be shaped by Ayn Rand rather than by the Anargyri.
Last Sunday in the Orthodox Church we commemorated the translation of the relics of the Holy Unmercenaries Cyrus and John [January 31 & June 28].


Saint Cyrus was a noted physician in the city of Alexandria, where he had been born and raised. He was a Christian and he treated the sick without charge, not only curing their bodily afflictions, but also healing their spiritual infirmities. He would say, “Whoever wishes to avoid being ill should refrain from sin, for sin is often the cause of bodily illness.” Preaching the Gospel, the holy physician converted many pagans to Christ. During the persecution by Diocletian (284-305), St Cyrus withdrew into Arabia, where he became a monk. He continued to heal people by his prayer, having received from God the gift to heal every sickness.
In the city of Edessa at this time lived the soldier John, a pious Christian. When the persecution started, he went to Jerusalem and there he heard about St Cyrus. He began to search for him, going first to Alexandria and then to Arabia. When St John finally found St Cyrus, he remained with him and became his faithful follower.
They learned of the arrest of the Christian woman Athanasia and her three young daughters. Theoctiste was fifteen; Theodota, was thirteen; and Eudoxia, was eleven. Sts Cyrus and John hastened to the prison to help them. They were concerned that faced with torture, the women might renounce Christ. 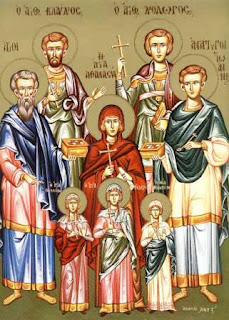 Sts Cyrus and John gave them courage to endure what lay before them. Learning of this, the ruler of the city arrested Sts Cyrus and John, and seeing their steadfast and fearless confession of faith in Christ, he brought Athanasia and her daughters to witness their torture. The tyrant did not refrain from any form of torture against the holy martyrs. The women were not frightened by the sufferings of Sts Cyrus and John, but courageously continued to confess Christ. They were flogged and then beheaded, receiving their crowns of martyrdom.
At the same place they executed the Holy Unmercenaries Cyrus and John. Christians buried their bodies in the church of the holy Evangelist Mark. In the fifth century the relics of Sts Cyrus and John were transferred from Canopis to Manuphin. Later on their relics were transferred to Rome, and from there to Munchen (Munich) 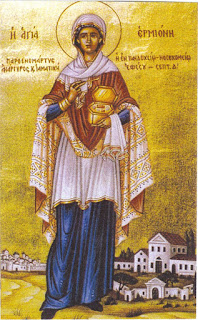 My main aim in this post is not to criticise or defend any particular method of organising health services, but rather to suggest that Christians should approach such issues with the mind of Christ, as manifested in the lives of the Holy Unmercenary doctors, and not with the mind of Mammon, as expounded by the followers of the false prophet Ayn Rand.


Icon (from here): St Hermione the Prophet & Unmercenary Doctor, daughter of saint Philip the Deacon from the Acts of the Apostles


Grace and “the Inverted Pyramid”

"We are called to holiness!" ― Two orthodox voices from Africa about the Sunday of All Saints
"That is the purpose of the Church, to make people holy"
The Kingdom of Heaven, where racial discrimination has no place
And yet, the Orthodox Church have saints in South Africa & in the whole of Sub-Saharan Africa...
Theosis, St. Silouan and Elder Sophrony
Theosis (deification): The True Purpose of Human Life
"Partakers of Divine Nature" - About Deification & Uncreated Light in Orthodox Church
The Uncreated Light
"THE WAY" - An Introduction to the Orthodox Faith