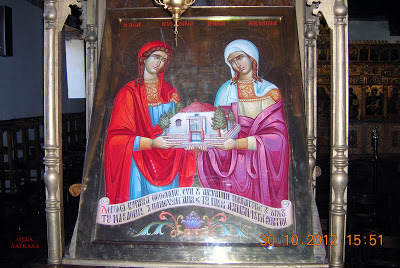 Icon depicting Sts. Kyranna and Akylina the New Martyrs, whose Holy Relics the Lord was well-pleased to reveal in our days near the Church of the Holy Taxiarchs, Ossa (source)


Full of Grace and Truth

The Life of St. Kyranna﻿


Our Orthodox Church today celebrates the memory of the New Martyr Kyranni or Kyranna. Saint Kyranna came from the village of Ossa near Thessaloniki. Because she was very beautiful, one a day a certain janissary who came to the New Martyr's village in order to collect taxes, upon seeing her, wanted to make her his wife. Even though he tried to persuade her to change her religion with flatterings and gifts in order for her to marry him, the modest girl stubbornly refused to resign to his flattering. Then he began to bully and to threaten her that if she did not give up her faith, he would torture and kill her.

But the saint did not change her mind, neither with the threats nor his bullying. He therefore captured her and brought her to the Muslim judge in Thessaloniki, where before the judge he lied by saying that Kyranna cheated him by promising him that she would become Muslim in order to marry him, but at the end she refused to do so. When the Saint was asked to defend herself, she confessed before all who were present her faith in Christ, and right after, the Turks imprisoned her.

Inside the prison, the Saint went through daily torture from the janissary and the prison guards. One would hit her with a stick, another with the flat of his sword, and another would kick or punch her. Then when they left, the jailer would come and hang her by her arms and beat her until he was tired out, despite the cries of outrage and rebukes of the common prisoners. Despite these torments, Kyranna would remain strong and courageous, and seemed unaffected by the pain as if someone else were suffering, and she refused the food offered her.

One night, after seven days of such torment, on the 28th of February 1751, Kyranna was severely beaten by the jailer with a piece of wood and he left her hanging dead. This was done because the jailer had illegally allowed others in to beat Kyranna, and one Christian prisoner threatened to reveal this to the pasha. In the morning the body of the Saint was covered by Holy Light and gave off a celestial fragrance, as her soul was delivered to God, and the Christian prisoners upon seeing that, started to glorify the Lord, but the Muslims and Jews were afraid because they thought it was fire. When the Christian prisoner went to bring down the body of the Saint and found out that she was dead, he took care of it, and the next day it was given to the Christians who buried it. This Christian reprimanded the jailer, who came to repent of his evil deed.

Today, in the village of Ossa, a great church exists dedicated to the New Martyr, Saint Kyranna, who is also the patron Saint of the community, and for this reason it is dedicated to her memory, since she was born and lived in Ossa. According to the historian Asterios Thilikos, the church was built in 1840, or according to its foundation date, it was built in 1868. The miraculous icon of Saint Kyranna is kept inside the church, which was painted around 1870, by Christodoulos Ioannou Zografos from the village of Siatista. 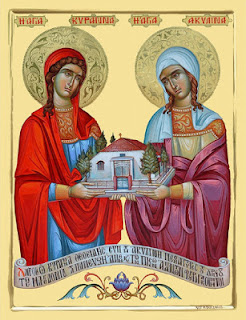 The Uncovering of the Holy Relics of St. Kyranna

Following the heroic and martyric death of the young Saint Kyranna on 28 February 1751, the faithful took her precious relics and had her buried outside the city of Thessaloniki. At the same time portions of her clothes were cut into pieces and given to the faithful as relics for a blessing. The people of the village of Ossa had a church built in the village in her honor a few decades after this event and Christoforos Prodromitis had a Service of Praise written to be chanted on the annual commemoration of her martyrdom. Her life was recorded by St. Nikodemos the Hagiorite in his New Martyrology.
Because St. Kyranna was martyred during the time of Turkish occupation, the only thing that was known about the location of her relics was that they were buried "outside the walls" of Thessaloniki. 260 years later St. Kyranna allowed the location of her relics to be discovered to the people who have honored her memory all this time. This all began when Metropolitan John of Lagada inaugurated 2011 as the year of Saint Kyranna, and he began to research her life in various sources. Thus on 12 September 2011, with the help of a monk from Mount Athos and the assistance of specialists and forensic experts, they confirmed that in the Holy Altar of the Church of the Archangels in Ossa, where St. Kyranna herself attended the Divine Liturgy, beneath the floor slabs a large portion of her relics were discovered. 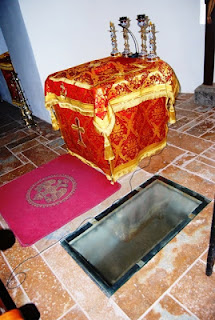 The area in the Holy Altar of the Church of the Archangels, Ossa where the relics of St. Kyranna were found (here)

Any questions generated by the investigation of the remains of the Saint were quickly put aside when a beautiful fragrance filled the church when the relics of the Saint were uncovered. With her bones there were also the leather shoes of the Saint, and forensic experts were able to determine the height, sex, age and year of burial of the Saint. Following this great discovery, Metropolitan John notified Ecumenical Patriarch Bartholomew and Archbishop Ieronymos of Athens and All Greece, then proceeded to have the public informed through a formal statement.

On Friday 23 September 2011 in an atmosphere of emotion and piety, the faithful of Ossa and the surrounding area gathered in the Church of the Archangels to celebrate the first all-night vigil with the presence of the relics of their patron saint. Metropolitan John was the officiant together with Bishop Demetrios of Thermes and a large number of priests from the Metropolis. The celebration will continue until October 10th with daily Supplication Services and all-night vigils, and will culminate on October 11th when Ecumenical Patriarch Bartholomew will visit the village and venerate the relics of St. Kyranna. At that time also the relics of St. Kyranna will be translated from the Church of the Archangels to the newer church dedicated to her honorable memory.

On 11 October 2011 Ecumenical Patriarch Bartholomew visited the Church of the Archangels in the village of Ossa in Lagada to venerate the recently discovered holy relics of the Holy New Martyr Kyranna. He was met by Archbishop Ieronymos of Athens, Metropolitan John of Lagada, many more bishops and priests, and a multitude of people who gathered for the Doxology. After Metropolitan John spoke about the life and martyrdom of St. Kyranna, as well as the miraculous discovery of her holy relics in recent days, the Ecumenical Patriarch spoke about the mindset of St. Kyranna, and noted that she should be an example and model for our times. He supported this by quoting St. John Chrysostom, who said: "Those who honor the martyrs, should imitate the martyrs."

After this priests bore the relics of St. Kyranna in a larnax and began a procession to transfer the relics from the old church to the new church built in honor of the Saint. Women threw flowers before the relics on the way, while children ran to venerate the relics of the Saint or grab a blessing from a priest. When the relics arrived inside the church, they were placed in front of the Holy Altar where Ecumenical Patriarch Bartholomew venerated them, followed by the Archbishop of Athens, the Bishops and all the people. Shortly afterwards the Ecumenical Patriarch was presented the manuscript of the Service to Saint Kyranna by Tryphon Tsombani, a professor of the Theological School of Aristotle University. 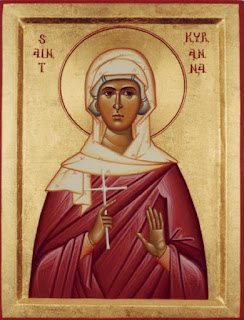 Apolytikion in the Plagal of the First Tone (amateur translations below)
Hail, offspring and divine root of Ossa, O Virgin-martyr Kyranna, Bride of God, who struggled steadfastly in these latter days, and deposed the enemy through your firm endurance. And now you ceaselessly intercede on behalf of those who faithfully honor your blessed struggle.

Kontakion in the Second Tone
O Virgin-martyr Kyranna who suffered greatly, and true and virginal bride of Christ, those who hasten to your fervant intercessions, deliver from every sickness and trouble, and grant us endless joy.

Megalynarion
Hail, O sacred root of Ossa, O godly Kyranna, spotless bride of Christ, to Whom you offered the struggles of martyrdom, and thus you were shown a partaker in martyrical glory.
(here & here)
Please, see also:

From Herod to ISIS through Christ: No Record of Retribution! (& a lesson from the martyrdom of the African Saint Cyprian of Carthage)
The Orthodox Christian sentiment regarding the persecutions of Christians by Islamists
A Christian perspective on Islam