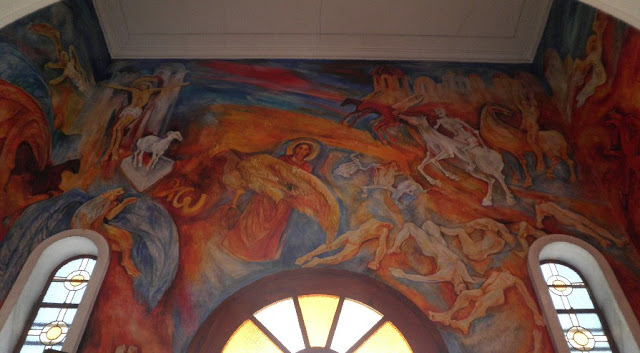 When we took up our artistic arms decades ago to venture into professional visual art through the then famous BAT Visual Arts Studios of the National Gallery of Zimbabwe we knew there existed a local venerate artist Helen Lieros and Gallery Delta. But we had not yet grasped what it is that makes one an exceptional artist and be widely recognised as a referral point in society. She was the first established artist to descend to the BAT Studios at the beginning of our foundation period and embraced us with her career art talk.
From that moment we were equipped with determination and genuine insight of the artistic journey that exterminate short cuts we had embarked on. We became highly inquisitive to perceive what she does and never missed out on most of her local participation in exhibitions especially at her confounded Gallery Delta.
Over the years what we have known on the surface of Helen locally is that she is a multifaceted no nonsense senior artist of high talent who expresses herself mostly in highly textural abstract painting work of rich colour from self-made pigments. 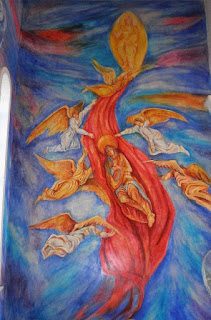 The Dormation of the Holy Mother (see here & here)

Her handmade paper too is a highly exploited surface of her work as a painter, drafts person and master printmaker and above all a generous warm-hearted and God fearing individual. Having highlighted the above few there are other critical attributes which need to be understood that uplifted her to reach the dizzy heights of creativity that we are accustomed to today.
This has a history, a tale of conquered obstacles through sheer hard work and resilience. Her recently launched art book at Gallery Delta Foundation for Art and the Humanities titled “Helen Lieros Mural Paintings” authored by her husband and co-founder of Gallery Delta, publisher Derek Huggins reveals she is a painter of the old masters’ calibre who executed great frescos of centuries still withstanding, appreciated and enjoyed by millions the world over by executing her own in Maputo, Mozambique.
The high definition images of her “Fresco Secco” which she locally first showed at Hellenic School in Harare when she gave her talk about the work now in a compact thick volume book illustrate magnificent human and animal anatomy with sublime flow of linear work of the drapery entailing what hard work and artistic talent is.
It is a rarity in this modern era to have an individual painter of one nation to be invited to another to partake such a mammoth task of furnishing the entirety of interior walls of an enormous iconic holly chapel with biblical events. She had to be the one fearless and capable to take us back to painting as we have known it. 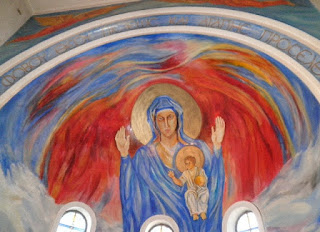 Her “Fresco Secco” in the Greek Orthodox Cathedral of the Archangels Michael and Gabriel in Mozambique’s capital attests to her remarkable consciousness of the subject, space, period and equally critical her incredible physical and mental strength which enabled her to well accomplish the masterpiece grafting even at above seventy. The work was executed over segmented periods of 1996 to 2002, 2008 to 2009 and finalised in 2013.
The project was conceived in 1996 when she was approached by the Honorary Greek Consul of Mozambique, George Tsihlakis, to paint murals in the Greek Orthodox Cathedral of Maputo. He had seen murals done just shy of three decades earlier by Helen in Harare’s Greek Orthodox Cathedral of the Holy Trinity. He furnished her with images of the naked interior walls and invited her to visit the holy space. She accepted to do justice to the call and with her typical whole painting kit from Zimbabwe she embarked on the execution of the “Apocalypse”, her first work of the fresco, with reference from the biblical book of Revelations. With the subject her intention was to have something which the general populace and worshippers would relate to and realise the necessity of peace. 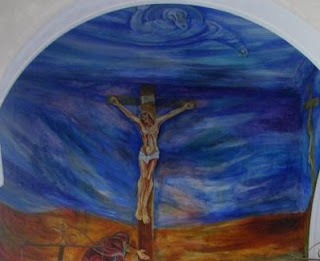 The Crucifixion
Repeatedly before, Helen has exclaimed her worries about “Mankind Repeating History”. She is concerned with the archetypal, which exists still in the passions of man, and the apocalypse. Myth, art and fact in the ancient Greek civilisation revealed the struggles of man.
Now as then, we are confronted by natural disasters, civil unrest, conflicts and wars, and the search for justice and peace. In reality these events become apocalyptic as predicted.
Her thoughts are portrayed by archetypes in their battles, flights and migrations in their search for freedom and as related to the African continent.
In her statement on the execution of the “Apocalypse” she said “Considering the history and circumstances of the Greek Orthodox Cathedral of the Archangels Michael and Gabriel at Maputo — atheism and communism had prevailed — my feelings were strong to eradicate the past in this beautiful but empty house of God by strong symbolism from the Book of Revelations, which I felt was apt.
I had many thoughts and had prepared many drawings and sketches. Climbing the scaffolding, I was in fear but started with zest by painting, on the left hand side of the wall, the Maputo Cathedral with Christ crucified in front and protecting it.

Then I put in the white ram and the “Alpha and Omega”, and surrounded by the four symbols of the winged lion, human, bird and bull. Further down lies Saint John who dreams as God tells him what to write. In the background are the seven churches and the four horsemen of the Apocalypse. Below, in the foreground lie dead figures, depicting wars, and illness by fling frogs as stated in the Book of Revelations that the people vomited”.
Her interpretations were created taking into account that it was a Greek Orthodox cathedral in Africa and necessity dictated figurative work. Encompassing narratives she has forsaken the traditional Byzantine style feeling that the essence should be vivid colour, impact and power. However, she respected the Orthodox tradition by the execution of such paintings as “The Panagia and Child” in a sanctuary behind the altar and “The Pantocrator” in a five-meter wide dome twenty five metres from the floor.

In total she painted about 15 enormous works in the church which included “The Creation”, “The Nativity”, “The Crucifixion”, “The Entombment of Christ”, “The Dormation of the Holy Mother”, “The Judgement”, “Homage to the Holy Fathers” and concluded in 2002 with “The Pantocrator”. In 2008 she was asked again to come back and carry out more work on other walls and worked on “The Massacre of Infants”, “The Trial of Christ”, and “The Procession of Soldier Saints” and “The Ephitafios” completed in 2009. The final recall was in 2013 when she executed “The Baptism of Christ”, “Christ Asleep in the Tempest” and “The Healing of the Blind Man”.
Hats off to the local star and may her work continue to be of great inspiration to many. 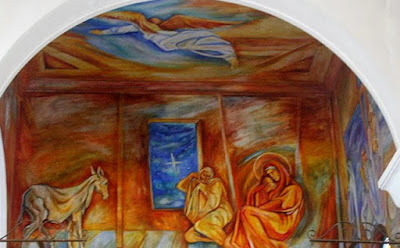 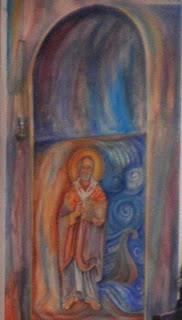 Fr. Athanasios Akunda, Reflections regarding the Orthodox Church in South Africa and Mozambique