Saints Mark of Athens and Mark the Ascetic, two Great Hermits in the African Desert (March 5) 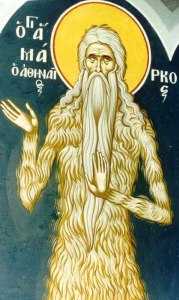 St Mark of Athens: "Mountain, go back to your place!"

“St Mark of Athens (4th c.) was born in Athens of pagan parents, but believed and was baptized, and, forsaking everything, lived as a hermit in the desert beyond Egypt. He did not see another human being for ninety-five years, and we would know nothing of his life had not the monk Serapion come upon him. Mark was about to depart this life, and lived only long enough to tell Serapion his story. Serapion then gave him burial.”
Abba Moses

“Saint Mark was born in Athens. He related his life to Abba Serapion who, by the will of God, visited him before his death.
He had studied philosophy in his youth. After the death of his parents, St Mark withdrew into Egypt and settled into a cave of Mount Trache (in Ethiopia). He spent ninety-five years in seclusion and during this time not only did he not see a human face, but not even a beast or bird.
The first thirty years were the most difficult for St Mark. Barefoot and bedraggled, he suffered from the cold in winter, and from the heat in summer. The desert plants served him for food, and sometimes he had to eat the dust and drink bitter sea water. Unclean spirits chased after St Mark, promising to drown him in the sea, or to drag him down from the mountain, shouting, “Depart from our land! From the beginning of the world no one has come here. Why have you dared to come?”
After thirty years of tribulation, divine grace came upon the ascetic. Angels brought him food, and long hair grew on his body, protecting him from the cold and heat. He told Abba Serapion, “I saw the likeness of the divine Paradise, and in it the prophets of God Elias and Enoch. The Lord sent me everything that I sought.” 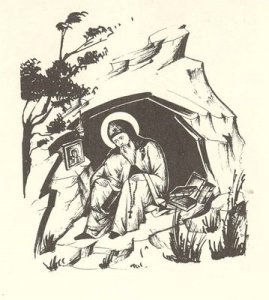 During his conversation with Abba Serapion, St Mark inquired how things stood in the world. He asked about the Church of Christ, and whether persecutions against Christians still continued. Hearing that idol worship had ceased long ago, the saint rejoiced and asked, “Are there now in the world saints working miracles, as the Lord spoke of in His Gospel, ‘If ye have faith even as a grain of mustard seed, ye will say to this mountain, move from that place, and it will move, and nothing shall be impossible for you’ (Mt.17:20)?”
As the saint spoke these words, the mountain moved from its place 5,000 cubits (approximately 2.5 kilometers) and went toward the sea. When St Mark saw that the mountain had moved, he said, “I did not order you to move from your place, but was conversing with a brother. Go back to your place!” After this, the mountain actually returned to its place. Abba Serapion fell down in fright. St Mark took him by the hand and asked, “Have you never seen such miracles in your lifetime?”
“No, Father,” Abba Serapion replied. Then St Mark wept bitterly and said, “Alas, today there are Christians in name only, but not in deeds.”
After this, St Mark invited Abba Serapion to a meal and an angel brought them food. Abba Serapion said that never had he eaten such tasty food nor drunk such sweet water. “Brother Serapion,” answered St Mark, “did you see what beneficence God sends His servants? In all my days here God sent me only one loaf of bread and one fish. Now for your sake He has doubled the meal and sent us two loaves and two fishes. The Lord God has nourished me with such meals ever since my first sufferings from evil.”
Before his death, St Mark prayed for the salvation of Christians, for the earth and everything in the world living upon it in the love of Christ. He gave final instructions to Abba Serapion to bury him in the cave and to cover the entrance. Abba Serapion was a witness of how the soul of the one hundred- thirty-year-old Elder Mark, was taken to Heaven by angels.
After the burial of the saint, two angels in the form of hermits guided Abba Serapion into the inner desert to the great Elder John. Abba Serapion told the monks of this monastery about the life and death of St Mark.”


Mark of Athens was one of the Bosci or Boskoi; the Grazing Hermits and “lived in this way till his body was covered with hair like a wild beast’s”.

St Mark the Ascetic: "Sell all that you have, and buy Mark." 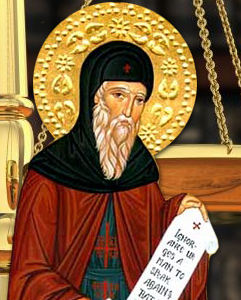 “St Mark the Ascetic (5th c.) was a disciple of St John Chrysostom, tonsured a monk at the age of forty by St John himself. He then withdrew to the Nitrian desert and lived for sixty years as a hermit, devoting himself to fasting, prayer, and writing spiritual discourses. Saint Mark knew all the Holy Scriptures by heart. His compassion was so great that he wept at the distress of any of God’s creatures: once he wept for the blind pup of a hyena, and the pup received its sight. Though he lived alone in the desert, it is said that he received Communion from an angel. The holy and scholarly Patriarch Photios held his writings in the highest esteem, and at one time there was a saying, ‘sell all that you have, and buy Mark.’ Some of these beautiful and profound writings may be read in English in the first volume of the Philokalia. “
Abba Moses 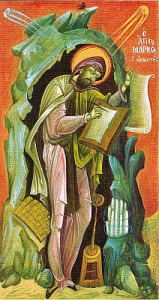 “Marcus Eremita or Markus the Ascetic was a Christian theologian and ascetic writer of the fifth century. Mark is rather an ascetic than a dogmatic writer. He is content to accept dogmas from the Church; his interest is in the spiritual life as it should be led by monks. He is practical rather than mystic, belongs to the Antiochene School and shows himself to be a disciple of John Chrysostom.
Various theories about his period and works have been advanced. According to Johannes Kunze, Mark the Hermit was superior of a laura at Ancyra; he then as an old man left his monastery and became a hermit, probably in the desert east of Palestine, near St. Sabas. He was a contemporary of Nestorius and died probably before the Council of Chalcedon (451).
Nicephorus Callistus (fourteenth century) says he was a disciple of John Chrysostom. Cardinal Bellarmine thought that this Mark was the monk who prophesied ten more years of life to the Emperor Leo VI in 900. He is refuted by Tillemont. Another view supported by the Byzantine Menaia identifies him with the Egyptian monk mentioned in Palladius, who lived in the fourth century. The discovery and identification of a work by him against Nestorius by P. Kerameus makes his period certain, as defended by Kunze.
En.wikipedia.org

Dream Team of the Desert
Monasticism
The holy anarchists... in the Egyptian Desert
The Invisible Naked Ascetics of Mount Athos

Deification - The Uncreated Light
"Partakers of Divine Nature" - About Deification & Uncreated Light in Orthodox Church
Theosis (deification): The True Purpose of Human Life
Theosis, St. Silouan and Elder Sophrony
LIVE, BEYOND THE LIMITS!
The Kingdom of Heaven, where racial discrimination has no place