The Holy Baptism and its effect on people who come to join the Orthodox Christian Church... 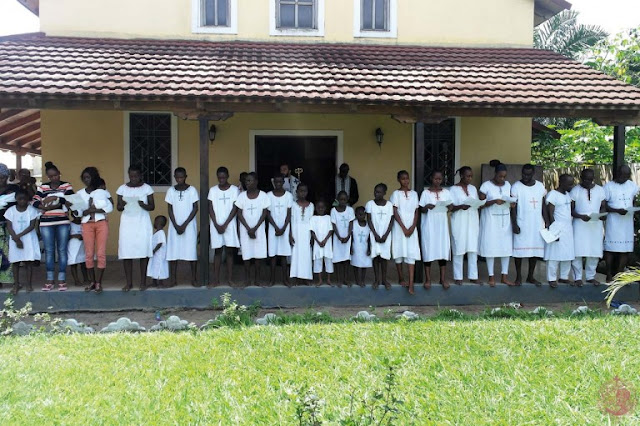 † PANTELEIMON of Brazzaville and Gabon

Before the beginning of the Sacrament of Holy Baptism, that is to say, the integration of the new Church member into Her bosom, comes the service of catechesis with the reading of exorcisms, the renunciation and condemnation of Satan from the catechumen and the acceptance and confession of our Lord Jesus Christ as the One and Only God. Even from the early Christian years, as we can see in texts of the Holy Fathers, the catechumen had to leave behind his old erratic religion and renounce Satan consciously so that he could proceed to the Sacrament of Holy Baptism in Spirit and Truth.
Personally speaking, I had to come to the African equator, a place not purely Christian, in order to see things “in practice”. I had to go to places which either had never heard of Christ before, or if they had, they had heard, seen and lived everything through the prism of heresies and the schism. Now that the Church bells ring the Orthodox way, they give a warm and joyful welcome to the blessed Gospel seeds in this land, announcing the way that leads to Unity, the way that leads to the Truth of the One, Holy and Undivided Trinity. 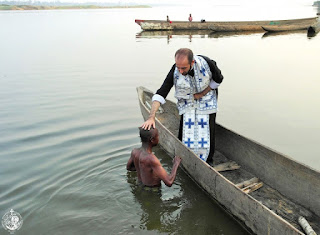 Those who are out of Church belong to themselves. Those who are conscious members of Hers, belong to Christ. The Fathers say that the one who is in despair is under the power of Satan. So is the person who denies Christ and is not in communion with Him and His Holy Church except with himself. Here in Africa, those who cooperate with Satan through the relevant occult rituals, always move around their “ego”, always have speculations and ulterior motives, they only care about their own interest and always seek something for themselves whether that be wealth, social status or prestige, or whether they are driven by envy, jealousy or hatred for the other, his life or his progress. It is not accidental the fact that the sorcerers enjoy a lot of recognition in such societies, a recognition which has its roots in the inmost fear for the “powerful spirit” which only inflicts harm, even to those who are empowered to invoke it and are in virtual communion with it! Our brothers who come to Holy Baptism more or less know all these things that I mentioned before. They are well aware of the need for supremacy, the meaning of isolation or stepping on one another, or even cooperating with the devil. And this is so because a number of them, if not the majority, have had this sort of experiences without ever finding joy, hope or serenity in their life, as they themselves admit.  Therefore, the renunciation of Satan before Baptism becomes a decisive act for the life of the African catechumen which will be sealed in Christ with the Grace of the Most Holy Spirit during the baptismal service. As workers of the Lord who conduct the sacred mystery of Baptism in Africa, each one of us has had experiences to remember of demons trembling at the sign of the Cross! All of us have had experiences of newly-illumined brothers, who at the sight of the sanctified water of Baptism changed their behavior and were turned into wild animals only to calm down later on when immersing into the same sanctified water that a while ago made the demons tremble with fear. 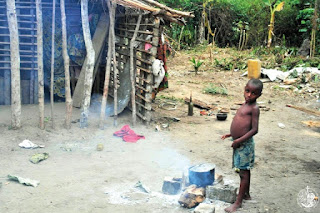 I had such an experience myself a short time ago with a young woman who had had a smiling face until the part of catechesis was over but who started feeling uncomfortable from then on. And this turned into body convulsions, inarticulate screams and a fall to the ground at the sight of the sanctified water, before the triple immersion. Invoking wholeheartedly our Benevolent God and begging for His mercy and power, I insisted on the poor woman’s entering the holy baptistery.
“The servant of God … is baptized in the Name of the Father and of the Son and of the Holy Spirit”. And it was then that the convulsions stopped and serenity returned to her face! When at the end of the holy mystery I asked that educated noblewoman to testify before everyone present what she had experienced a few minutes before, she boldly said that she had felt losing herself into utter darkness before immersing into the holy water, whereas when immersed into it, she felt “redemption from invisible ties”, as she mentioned word for word.
Satan rests where Christ is forgotten, where love is left aside. The societies that are ministered to by humble missionary laborers of the Gospel of Christ have had thousands of victims over the centuries, such as victims of witchcraft and sorcery, superstition, slavery, ignorance, illiteracy, war, the western civilization…In every case the victims suffered from those powers which are against anything God-driven, blessed or creative, anything that promotes spiritual development.  And it is indeed a miracle of the Triune God the sowing of the Word in a land barren of love over the centuries, a true love, which springs from the empty Holy Sepulcher of the Resurrected Jesus.
Lifting up my eyes to the Crucifix, the One who stretched out His holy arms on the Tree of Life and joined the unreconciled things of this world bringing unity, I pray that He leads our brothers of this ecclesiastical province into the common doxology of our Church “with one mouth and one heart”, so that joined in one faith and in true love with all the Orthodox Christians all over the world, they magnify His Most Holy Name and live within the everlasting Light of His Grace.

Orthodox Diocese of Congo-Brazzaville and Gabon (official website)
The Orthodox Church in Congo & Gabon & the Orthodox University "St. Athanasius Athonite"
Congo (Brazzaville): Look down from heaven and behold…
Proto-Christian march on the land of the Pygmies
Witchcraft (tag)
20th Century, a truly dark age - The Lives of Sts Cyprian and Justina
Magicians Who Converted to Orthodox Christianity
Two Magicians Baptized Orthodox Christians in Eastern Congo (DRC)
Witchcraft in Congo - Testimonies from the Orthodox Mission
Albinos killings for black magic in Tanzania, Burundi and Swaziland
Two miracles of the Holy Cross in Africa (Congo)
We are Going to Live in Paradise: Orthodoxy in Congo

How “White” is the Orthodox Church?
Ancient Christian faith (Orthodox Church) in Africa
African Initiated Churches in Search of Orthodoxy...
Theosis (deification): The True Purpose of Human Life
Theosis, St. Silouan and Elder Sophrony
Orthodoxy's Worship: The Sanctification of the Entire World
LIVE, BEYOND THE LIMITS!
The heritage of the Orthodox Christian tradition in Africa today