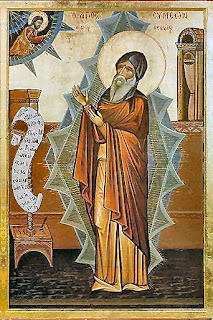 The vision of the young St. Symeon the New Theologian of God's uncreated light at the age of twenty is one of the most misunderstood Patristic passages that has been used to justify many false visions. Many times ordinary people have revealed to me stories of personal visions of light that anyone with even a small amount of discernment can recognize either as psychological or demonic in origin. I have also entered into debates and discussions with Orthodox theologians regarding visions of God's light received by non-Orthodox, such as the mystics of the West or Buddhists of the East. In almost all cases the vision of St. Symeon at the age of twenty is used to justify their emotion-filled arguments for the validity and divine origin of these visions. Their argument, though misinformed, is simple: Symeon saw God's uncreated light then fell into sin, so if Symeon can have such a vision then why can't anyone (including non-Orthodox)? They also argue against the need for purification and illumination to take place before such a vision can be granted. Are such interpretations justified?

It has become clear to me that of the many who have tried to use the above emotion-filled justifications have hardly or even never read the works of St. Symeon. The account in which he describes his vision at the age of twenty is described in his homily On Faith. The event St. Symeon describes is written in the third person in which he uses the pseudonym "George" to describe his actual experience. When he was fourteen he had approached his spiritual father Symeon the Elder to enter the monastic life, but considering the young Symeon immature at the time he rejected his entrance and told him to live a monastic sort of life in the world until he was mature enough - which didn't happen until he was twenty-seven. Thus seven years prior to his entering the monastic path did he have his vision.

From the age of fourteen until twenty St. Symeon strove to imitate that which he read in the writings of St. Mark the Ascetic. His day job was managing a patrician's household in Constantinople and engaged in the worldly affairs of the palace. But at night he would keep vigil and pray with tears and do as many prostrations as his conscience told him to do so that, at the advice of St. Mark, he never slept until his conscience was satisfied. He describes himself as regarding "all material things of life with indifference and even approached food and drink without taking pleasure in them or doing so with frequency." He says that he never observed long fasts beyond the prescribed fasts of the Church, he never slept on the ground, wear a hair shirt, or was tonsured a monk. Yet he had faith and actualized it in the world, as he says in his discourse: "By these deeds his faith received wings and reached heaven." 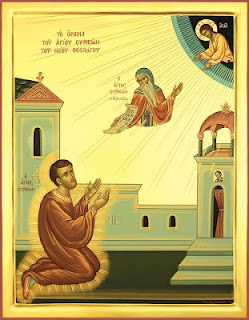 It was in this context that one night, while praying "God have mercy on me a sinner" with his mind, that "suddenly a flood of divine radiance appeared from above and filled all the room." He describes the vision as "nothing but light all around" him, to the point where he thought he was falling because even the ground was filled with light. "Oblivious of all the world he was filled with tears and ineffable joy and gladness." However St. Symeon goes on to describe that above him in the heavens there appeared another more clear light that was surrounding his spiritual father Symeon the Elder.

Following this vision, Symeon continued about his daily business affairs in the palace. This is something he would come to regret however. He writes:

"What we have related about this young man is amazing and unexpected, and we have never heard that anything like it has happened to anyone else. Even though it may have happened in some cases or will happen in the future, yet men should know that they will be deprived of so great a blessing unless they promptly withdraw from the world, or they will soon lose what they have received."

And by this Symeon reveals the reason for relating this story: that when one has been purified and illumined one must withdraw from the world completely to maintain the grace within. Symeon basically goes on to say that he received this vision of his spiritual father in uncreated glory because, through the prayer of Symeon the Elder, Christ was calling him to a monastic life and to the emulation of his elder. Young Symeon did not do this but remained in the world and Satan came out strongly against him to prevent his withdrawal to a monastery. He fell into despair as a result of his disobedience. It was only through the guidance and prayers of his spiritual father that he was able to free himself of his despair and recover. It was only until he completely renounced the world and repented with extreme ascetic feats after many years that he got a glimpse of what he had seen earlier, though Symeon is writing in the third person so we don't know how humble he was being at this point.

When we thus examine what St. Symeon says in his own words and in proper context, it is extremely far-reaching for Orthodox to use this example as a justification for the vision of uncreated glory of the non-Orthodox or even themselves outside of the context of purification and illumination within the Orthodox tradition. So when Symeon says that he lived a worldly life, he does not mean that he lived a sinful life in the world but that he maintained a busy occupation in the world while living faithful to God's commandments. And his post-vision despair is only the result of not being obedient to his monastic calling at the right time. This does not take away the fact that Symeon was living an ascetical life in the world, molding his faith by his works, and attaining a state of inner purification so as to be found worthy of the vision of divine glory. And it was not until after much effort for his disobedience to his heavenly calling that he was able to recover that which he lost. As St. Symeon explains in the same homily following the description of his vision by quoting St. Gregory the Theologian:

"Gregory the Theologian said: 'It is written, The fear of the Lord is the beginning of wisdom (Prov. 1:7). For where there is fear there is the keeping of the commandments. Where there is the keeping of the commandments, there is the purification of the flesh, and from the cloud that besets the soul and prevents it from clearly seeing God's ray of light. Where there is purification there is illumination. Illumination is the fulfillment of those who desire either the greatest of all supremely great things, or even that which is above all greatness.' By this saying he showed that illumination of the Spirit is the goal of every virtue. He who attains to this illumination has arrived at the end and limit of all things that can be perceived and has found the beginning of the knowledge of spiritual things."

Interestingly this is all very similar to the vision of Saul on his way to Damascus before he was baptized Paul and made into an Apostle. Saul was a persecutor of the Church, yet beheld the resurrected Lord of glory. However, as a persecutor and being outside the Church, this vision was not the result of being found worthy due to his inner purification. Instead this vision of divine glory was like hell fire to him and it blinded him for his unworthiness. He was commanded to be baptized to receive his sight, and by baptism he was purified and illumined which he actualized by going into the desert for two years to study and pray. And by his obedience he progressed from glory to glory, whereas Symeon initially was disobedient and prevented from doing so until he repented.
Please, see also:

Theosis, St. Silouan and Elder Sophrony
Theosis (deification): The True Purpose of Human Life
"Partakers of Divine Nature" - About Deification & Uncreated Light in Orthodox Church
The Uncreated Light
"THE WAY" - An Introduction to the Orthodox Faith
Orthodoxy's Worship: The Sanctification of the Entire World
African Orthodox Saints
In Peace Let Us Pray to the Lord : An Orthodox Interpertation of the Gifts of the Spirit / An Orthodox answer to the pentecostalism and charismatic movement!
Charismatic Revival As a Sign of the Times

How “White” is the Orthodox Church?
Ancient Christian faith (Orthodox Church) in Africa Orthodox Monasticism
LIVE, BEYOND THE LIMITS!
«African needs to be helped, to find his divine roots, for his soul to be at peace, to become united with God...»