A Daughter 'Gives Birth' to her Mother

A contemporary miracle of the Theotokos in the field of foreign missions providing numerous teachings.

Nina, a girl of about ten years old, was the third child of a family which lived in Western Kasai (Congo). Her two older siblings, two boys, had left this world very early on, making Nina the only daughter and only child.
Nina was born of a mother who retained deep religious interest, even to the point that she had embraced a protestant sect and even became a 'pastoress' (i.e. type of priest).
As would be expected, Nina would go with her mother to the congregation of protestants. Still, the good reputation of the Orthodox Mission school brought the girl to the Orthodox school's desks.
From that moment on she entered into a sequence of internal and external transformations. It is worth taking a look at them.
As time passed by, Nina started becoming more resistant and did not want to follow her mother to the protestant gatherings. But she continuously attended—although not baptized—the ecclesiastical gatherings of the Orthodox. After a short time, the girl asked to be baptized!
Her parents, and most of all her grandmother, did not even want to hear of such a thing. This intensified Nina's desire to receive Holy Baptism.
Her father was forced to re-examine his daughter's request and made the following decision: “my first two children died, one at two years old and the other at one year of age. My little daughter has turned ten. Let her be baptized if she desires it so much, in case she dies too”! The rest of the family succumbed and in sadness accepted his decision.

Nina whole-heartedly thanked both her heavenly and her worldly father, was catechized and after a little while was found ready for baptism. She continued, of course, to go to her catechism lessons unfailingly and was never absent from the Holy Liturgy on Sundays and feast days.
In one of the catechism lessons, her catechist spoke to the children about the Most Holy Mother of God, Who is also our Mother, and at the end of the lesson gave each child a paper icon of the Most Holy Theotokos.
Nina's soul felt a secret, deep connection with the Most Holy Person of the Theotokos, and when she arrived home she placed Her Holy image on the highest point of the cabinet in the dining room, causing many negative reactions from the rest of the family. But she insisted and succeeded in leaving the sacred image of the Virgin Mother where it was.
On Sundays, Nina's 'pastoress' mother received many visits from protestants in her house. As soon as the protestants saw the image of the Theotokos they made the expected remarks and asked that they remove the Theotokos from Nina's family home. Nina's desire was again proven stronger than the protestants' demands. Her parents said that it was a childhood request and they did not want to sadden their girl, since, for themselves, this paper image meant nothing important. The protestants left upset and troubled, and they discussed with many of their own about this notable change in the 'pastoress'' home!

The next Sunday, a pastor more senior than the rest wanted to see it with his own eyes and, being accompanied by several others, knocked at the door of Nina's house. The 'pastoress' opened the door willingly to welcome them in. Then the senior pastor said:“I am not coming in because up there there is a WEAPON”!
The 'pastoress' feeling quite insulted replied: “What are you talking about? There is no weapon in our house!"
The pastor insisted: “Up there, there is a WEAPON”! and indicated the cabinet with the sacred image, while remaining outside the door.
The hostess explained to him that there was a small paper image that her daughter brought over from her catechism, but he insisted that there was a WEAPON! In the end, he left the house with those accompanying him bitter and displeased, rigorously hiding their fright too...
This confession from the pastor and fear in front of the sacred image of the the Most Holy Virgin Mother was God's message to the 'pastoress'' heart. A holy worry filled her heart: “How is it possible for such a small image to be a 'weapon'?” “Why were all the pastors scared?” They were questions that required immediate answers.
So the blessed woman happened to be passing by the door of the Orthodox Mission around this time, with a different attitude and with her eyes and ears wide open. She had acquired “ears that can hear” to Nina's unimaginable joy. 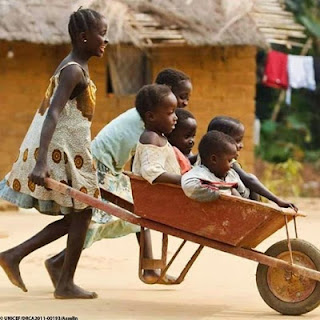 There at the 'mission' she asked several questions, received answers, experienced the environment of the sacred church, was touched before the holy icon of the Theotokos and asked to be forgiven for her misbelief and for having punished her Nina so many times. But she also complained: “For all this time that you have been seeing me come here to the school, with my daughter, why didn't you say anything to me? Why are you hiding such a treasure?”
The answer was easy: “You were a 'pastoress' in a sect and thought you possessed the truth. You hardly accepted that your daughter was baptized. How could we have caused you a temptation? What we did not do the Holy Spirit did, together with the honest and pure soul of your child! Let us glorify our Lord and Savior and His Virgin Mother and our Mother for this great gift which They have granted you”.
After all this, she went to the protestants and confessed that she no longer held their beliefs, dropped at their feet the sacral vestment—a black dress—and ran to register for catechism of the Orthodox Church. One of the priests of the Church exclaimed in a byzantine melody: “Strange and paradox things have happened today...”

Two miracles of the Holy Cross in Africa (Congo)
We are Going to Live in Paradise: Orthodoxy in Congo
The Orthodox Church in Congo & Gabon & the Orthodox University "St. Athanasius Athonite"
The Life and Legacy of Blessed Father Cosmas of Grigoriou
The historical background of the monastery in Kolwezi, Congo (DRC)
The Life & Legacy of the pioneer missionary Chrysostomos Papasarantopoulos
Orthodox Democratic Republic of Congo (tag)