Fr. Sophrony [Sakharov], in his book on St. Silouan, presents this theory of the “inverted pyramid.” He says that the empirical cosmic being is like a pyramid: at the top sit the powerful of the earth, who exercise dominion over the nations (cf. Matt. 20:25), and at the bottom stand the masses. But the spirit of man, by nature [unfallen nature as given by God], demands equality, justice and freedom of spirit, and therefore is not satisfied with this “pyramid of being.” So, what did the Lord do? He took this pyramid and inverted it, and put Himself at the bottom, becoming its Head. He took upon Himself the weight of sin, the weight of the infirmity of the whole world, and so from that moment on, who can enter into judgment with Him? His justice is above the human mind. So, He revealed His Way to us, and in so doing showed us that no one can be justified but by this way, and so all those who are His must go downwards to be united with Him, the Head of the inverted pyramid, because it is there that the “fragrance” of the Holy Spirit is found; there is the power of divine life. Christ alone holds the pyramid, but His fellows, His Apostles and His saints, come and share this weight with Him. However, even if there were no one else, He could hold the pyramid by Himself, because He is infinitely strong; but He likes to share everything with His fellows. Mindful of this, then, it is essential for man to find the way of going down, the way of humility, which is the Way of the Lord, and to become a fellow of Christ, who is the Author of this path.

Archimandrite Zacharias in The Enlargement of the Heart
The teaching of St. Silouan, itself a continuation of the unbroken Tradition of the Church, was continued in the life and writings of the Elder Sophrony. Today it continues in the life and teachings of the elders and community of the Monastery of St. John the Baptist in Essex, England, of whom Archimandrite Zacharias is an example. His recent visits to the United States to conduct retreats have now become books which continue to expand and confirm the teaching of St. Silouan and the Tradition of the Holy Orthodox Christian faith.
One of the strongest elements drawn out in both the life and teachings of St. Silouan is just this word of humility as illustrated in my opening quote. To be a follower of Christ is to accept a “downward path,” to follow Christ into the depths of His humility. This is not a new word, but echoes that of the Apostle (which itself seems to have been a hymn which the Apostle was quoting):

Have this mind among yourselves, which is yours in Christ Jesus, who, though he was in the form of God, did not count equality with God a thing to be grasped, but emptied himself, taking the form of a servant, being born in the likeness of men. And being found in human form he humbled himself and became obedient unto death, even death on a cross. Therefore God has highly exalted him and bestowed on him the name which is above every name, that at the name of Jesus every knee should bow, in heaven and on earth and under the earth, and every tongue confess that Jesus Christ is Lord, to the glory of God the Father (Phillipians 2:5-11).

This clear teaching of the Apostle, which only echoes the utterly consistent teaching and example of Christ, has a history of being obscured within Christianity – with Christians forgetting this essential teaching and following after a human Lordship and model of salvation.
In a wide variety of places and situations, Christians have thought to establish some image of the Kingdom of God (or even the Kingdom itself) here on earth through means other than the path of humility set forth by Christ and the faithful Tradition of the Church. The result has been varied – but has often been merely a tyranny in the name of God, which is no better than a tyranny in the name of something else.
I am reminded of a statement by Stanley Hauerwas, Protestant theologian and professor at Duke University:

The Christian community’s openness to new life and our conviction of the sovereignty of God over that life are but two sides of the same conviction. Christians believe that we have the time in this existence to care for new life, especially as such life is dependent and vulnerable, because it is not our task to rule this world or to “make our mark on history.” We can thus take the time to live in history as God’s people who have nothing more important to do than to have and care for children. For it is the Christian claim that knowledge and love of God is fostered by service to the neighbor, especially the most helpless, as in fact that is where we find the kind of Kingdom our God would have us serve.

in A Community of Character

In countless lectures and seminars in which I participated while a student at Duke’s Graduate School of Theology, I heard Hauerwas echo this quote with the assertion that “so soon as Christians agree to take responsibility for the outcome of history, we have agreed to do violence.” This violent outcome is a complete perversion of the “downward Way” described by Archimandrite Zacharias and the Orthodox Tradition. Our goals are thus never measured by the “outcomes of history” but by the “measure of the stature of the fullness of Christ” (Ephesians 4:13).
This same contradiction, in narrative form, can be found in Dostoevsky’s classic chapter, “The Grand Inquisitor,” in The Brothers Karamazov. The Grand Inquisitor lashes out at Christ for His failure, as measured in the outcomes of history, and justifies Christians’ use of tools such as the Inquisition as an improvement over the weakness of God. The argument of that famous chapter, as well as the previous chapter, “Rebellion,” mark the high-point of Dostoevsky’s summary of the argument against God and the Orthodox Christian faith. The answer to that diatribe is not a counter argument, but the person of the Elder Zossima, who lives in the Tradition of the Holy Elders of the Faith such as St. Silouan, St. Seraphim of Sarov, the Elder Sophrony, and a host of others. Their lives, frequently hidden from the larger view of the world, are the continuing manifestation of the Kingdom of God in our midst – fellows of the sufferings of Christ – who freely and voluntarily bear with Christ the weight of all humanity. It is this secret bearing that forms the very foundation of the world – a foundation without which the world would long ago have perished into nothing. It is the emptiness of Christ, also shared in its depths by His saints, that is the vessel of the fullness of God, the source of all life and being. We can search for nothing greater. 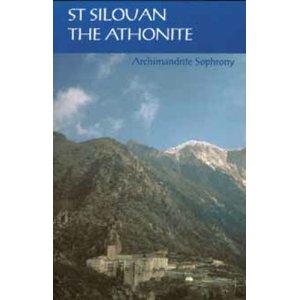 The Photo is of 12th century Norman Church down the road from St. John the Baptist Monastery in Essex. The Monastery has use of the Church and has Sunday liturgies there. Also, this teaching in contemporary publications is probably best found in the books by either Elder Sophrony or Archimandrite Zacharias... (from here).