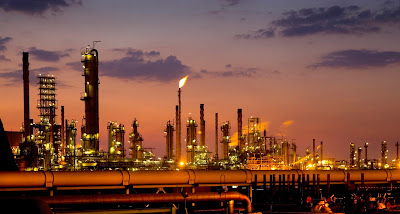 Africa has some of the highest rates of population growth and urbanization in the world, with two mega cities: Lagos, with a population of 13.4M and Cairo, with a population of 10.6M. Currently, 38% of Africa's population is living in urban areas. It is estimated that by 2030, 54% of its population will be in urban areas.
Because of the increased urbanization in Africa, the rise in vehicle emissions, and the trend towards greater industrialization, urban air quality in the continent is worsening. In many countries, the use of leaded gasoline is still widespread, and vehicle emission controls are nonexistent. Indoor air pollution is widespread, mostly from the burning of biomass fuels.
Air sampling in the eastern part of the U.S. shows transboundary impacts from Sahara dust carrying pollutants and pathogens.

The links below are to image files and not complete web pages. Click on the link to view the image. Use your browser's back button to return to this page.
Three of the largest emitters of greenhouse gases in Africa are:
According to the IPCC, Africa is the region most vulnerable to impacts of climate change.

Air pollution from African cities is set to increase dramatically over the next two decades, according to scientists in France and the Ivory Coast. Their study warns that by 2030 the continent’s anthropogenic emissions are likely to equal its forest-fire emissions, while its organic carbon emissions could account for 50% of the worldwide total.
The topic of urban pollution is fast becoming important for Africa. Until recently, the continent was considered a strong emitter of pollutants only from rural forest-fires, but an increase in traffic, domestic fires, industry and other sources of combustion has led it to be seen as a strong emitter of urban pollutants too, like China and India.
Unfortunately, unlike these countries, Africa has not had its own reliable inventory for anthropogenic combustion emissions, and so no-one has known exactly how bad the continent’s emissions are. The problem is particularly concerning given the rapidly rising population in Africa, which is expected to be home to two-fifths of the world’s people by the start of the next century.
Claire Granier of the Pierre and Marie Curie University in Paris, together with colleagues at other French institutions and the Félix Houphouët-Boigny University in Abidjan, has now predicted how African emissions will change over the next two decades. Using various existing databases, Granier and the team examined 25 categories of fuel, considering 12 emission factors and three levels of technology for each. The assessment enabled the researchers to estimate emissions for the year 2005, and forecast emissions for the 2005–2030 period, for pollution containing black carbon, organic carbon, carbon monoxide, nitrogen oxide, sulphur dioxide and hydrocarbons besides methane.
The researchers found that African combustion emissions contributed significantly to global emissions in 2005, most of which still came from forest fires. However, they predict that if no new regulations are made, urban emissions will equal rural emissions from forest fires by 2030. Africa’s contribution to worldwide emissions will also be much greater by then, the researchers say, with organic carbon emissions accounting for about 50% of the total.
"We think that our colleagues working on studies of air composition and its evolution related to human activities (including impact studies) could be surprised by the importance of anthropogenic emissions of air pollutants in Africa in 2005, but especially in 2030," said Granier. "The most advanced climate models (chemistry-climate models and Earth-system models) also consider the emissions of air pollutants, and our new emissions will also interest these people."
Granier added that we should take notice of the rising emissions, because the team’s research also suggests that they could be mitigated. "We should indeed be concerned about this situation," she said. "Some of these pollutants may have a climatic impact that will be affected by higher emissions. Higher emissions could also imply a deterioration of air quality and health."
According to Granier, a team is being gathered in Africa to focus on combustion-emission inventories, to reduce uncertainties in the present data. The first step will be to collect more accurate information on fuel consumption for different sources, and add new fuel sources that were not included in this analysis, such as flaring and waste burning. "We will also calculate the impact of such emissions on air quality and health," she said.