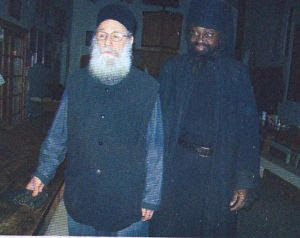 A frozen forest, a small church, few monks - all young Americans, smiling. The tomb of Fr. Seraphim Rose is a short distance away, behind the church.The February night comes quickly.

We learn that there is only one cell for women with two beds. For men there is also only one cell, but with many more beds. Fr. Moses appears, a black man...very black. In the night one can only see his teeth, smiling as he gives us hospitality. He is tall, around two meters! He leads us to the cell where he has started a fire. Then I suddenly associated him with the icon of St. Moses the Ethiopian that I saw in the Church of St. Herman in Platina. It was like a living answer to my perplexity when I saw the icon among dozens of Russian icons of saints, at a far away place in America. The young "colored" Orthodox American monk did not receive by chance his name at his tonsure. 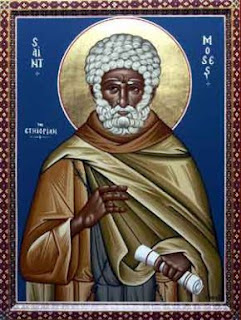 The next day we had breakfast, and we saw the obedience of Moses was in the refectory: he cooked, he quickly served, he read from a book while we were all eating. His hospitality was done with much love, with simple non-pretentious movements, and joy given from heart to heart. The young Orthodox American had these like St. Moses the Ethiopian.

If in 21st century America, where 1% of the population is Orthodox, someone can have as an example the asceticism of St. Moses the Ethiopian, then all is not lost.