The Beheading of the holy glorious Prophet, Forerunner and Baptist John (29 August) 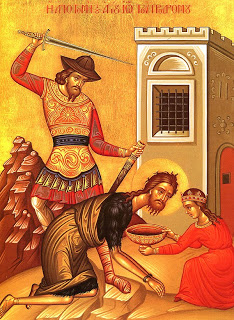 We have become accustomed to imagining Saint John the Baptist as an angry and boisterous prophet, permanently dissatisfied and grumpy, who used to rant loudly at people in a harsh manner, urging them to repent for their sins so that they won’t be annihilated by the wrath of God and burn in hell. And that may well be the case… Of course the expression “wrath of God” is an image that symbolizes man’s enmity towards God, and “hell” is man’s view of the Divine Light as a consuming fire, because of human egotism. But, the truth is that Saint John – as well as all the Prophets and Saints in every era – who, inspired by Divine Grace, possessed abundant love for mankind, and it was precisely that kind of love (and not any harsh “sense of justice” or any supposed “offence to God” and such irrelevant notions) that prompted them to persuade people to repent.
Repentance is what will help people to be saved, and mankind’s salvation is the true concern of the Prophets and the Saints; in other words, it is God’s true concern that inspires them.
In Herod’s case, we can see that the Baptist was by no means his actual enemy; on the contrary, he was Herod’s best friend (or rather, his ONLY friend!), given that Herod, a very vicious individual, most probably had no other, true friends…

Everyone knows how the Baptist exercised austere criticism on Herod, given that he had stolen his brother’s wife, Herodias, and had made her his official concubine, or possibly wife. A very annoyed Herod threw John into prison as punishment for his criticisms, but, Herodias with her familiar shrewdness, instructed her daughter Salome (who charmed Herod and all his “distinguished” guests during his birthday party with her obviously sexual enticing dance) to demand the head of the Baptist on a platter. This demand was “honoured” by the king (as foolishly promised by him in public), and the Baptist’s severed head was handed to the teenage Salome, who then handed it over to her cunning mother (may God forgive them all…).
We need to point out here that the specific Herod here was Herod II (Herod Antypas), son of the old Herod, who had commanded the slaughter of the thousands of infants (in the hope of exterminating the threat of the then newly-born, prophesied King); this was Herod the Tetrarch, the so-called “Great” Herod.

But why did the Saint exercise such austere criticism on Herod? Was it to cause him political damage? Or to provide a reason for rebels to overthrow him? For social or political reasons specifically? Well, we have no reason to believe that the Saint had any such motives. Being familiar with the tradition of the Saints, we are able to perceive something else: John the Baptist’s criticism of Herod was intended to save him! And with him, his consort, Herodias, whose inspiration it was to kill the Prophet. And how was John striving to save them? Well, with his vociferous critique, John strived to curb the long-term sin of adultery that Herod had been committing. As such, John proved to be the best (if not the only) friend of the royal couple, because he was the only one who dared to publicly declare them as sinners and urge them to resort to salvific repentance. 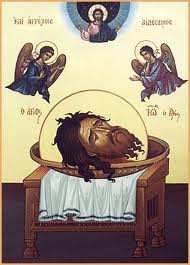 But, there is something else that is indicative of the Saint’s love and concern for Herod. In Mark’s Gospel (ch.6, verses 19-20), we read the following, which pertains to the time that the Saint was imprisoned:


“19 Therefore Herodias held it against him and wanted to kill him, but she could not; 20 for Herod feared John, knowing that he was a just and holy man and he protected him. And by listening to him, he did many things, and he listened to him gladly.”

(Here is one more case where the word “feared” has the meaning of “respected” – as in the familiar Gospel quote of “…and the woman shall fear the man…”)
The fact that John conceded to talk to Herod from inside his prison, and even counselled him on certain matters - obviously for him to be proper and just – is proof that the Saint held no grudge against Herod, nor did he hate him, but on the contrary, loved and cared about him! This stance provides a very important example of how a Saint becomes a rebel against a corrupt authority: he censures it with boldness, but not with hatred. He hates corruption, the abuse of power and sinning, but continues to lovingly care about the persons, even when they are corrupt and sinful, and strives for their salvation (provided of course that they also desire it). He does not change this stance, and even gives up his own life for them. 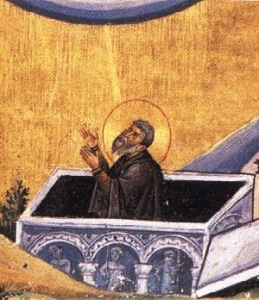 The Beheading of the holy glorious Prophet, Forerunner and Baptist John (29 August)
From Herod to ISIS through Christ: No Record of Retribution! (& a lesson from the martyrdom of the African Saint Cyprian of Carthage)