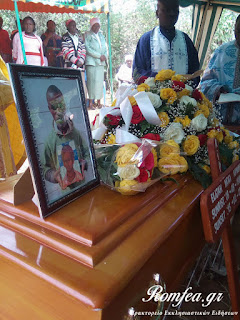 "Death has robbed a student of Social work department - Elijah Ngigi he was a humble and hardworking student that I knew for a period of time. As to his death he landed in the hands of cruel men who shortened his dreams. may his sour rest in peace" (Orthodox College of Africa).

Automatic translation from Greek: Ένας νέος ορθόδοξος μάρτυρας στην Κένυα; A new Orthodox Christian Martyr in Kenya?. There may be serious translation errors.
Makarios, metropolitan of Nairobi
Ορθόδοξη Ιεραποστολή – Orthodox Mission – Mission Οrthodoxe – Misión Ortodoxa – Missão Ortodoxa – Missione Ortodossa – православная миссия – Misiunea Ortodoxă – 东正教使命 – रूढ़िवादी मिशन
Ρομφαία // Romfea
Within the mission area, we usually present to the general public either through the written word or through television and our time from the internet all the things that are going on in order to reinforce the people who help us and play our part in our work.
We naturally refrain from giving any information that may hurt our friends, supporters and supporters for the various accidents, difficulties and frustrations that come from our daily experience and intense participation because we prefer to suffer them alone and in the spirit of our own God to continue.
Today, however, I have to make a public confession, even though in the volumes of my personal experiences (Testimonies of Life Volume A, B, C, D) I am not recording in much detail the suffering of such a rich and blessed course in the field of mission.
In the daily program maybe because we are used to it so much that we do not pay much attention. Five deadly attempts, robberies, attacks, deadly illnesses, road accidents, etc., not to mention more, because I deeply believed that God's invisible hand never ceased to protect us and open new horizons to the spiritual we rise with more repentance and meditation, self-control of our own self with sincerity and deep humiliation.
We absolutely believe that all this pain, injustice and tears ultimately help us better understand our unknown self and see that in the time of our pain we feel richly blessed.
Today I write all this because, with the news of the murder of a very close friend and brother, we all regret. This young man was not a coincidence. He was endowed with many virtues and rare spiritual gifts. He was unfamiliar and he did not like the reputation and publicity at all. We met him since he was born in 1995 and his parents were loyal and closely linked to our Orthodox Rite here in Kenya. From a young age, he was led to the baptism of our direct union with God and the teaching of the Mia and the indivisible Orthodox Christian Church. 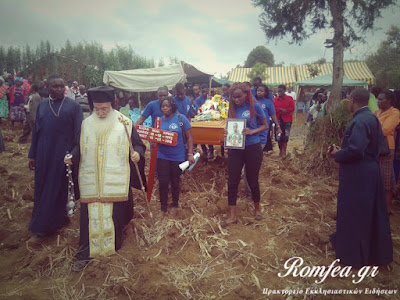 His parents prophetically dedicated him to God. He was led to the sanctuary and was faithful and humble. It served silently like an angel.
His parents again taught him to worship God and to respect, to love all people of indifferent color or origin. His father, who was very close, especially with the priests and parishes who served from distant Kilimanjaro to Central Kenya and the outskirts of Nairobi, left everywhere a good memory.
Their poverty was unrivaled. But these people never complained to them. That young man was always modest and humble. His thought was continually directed into the church, in his parish that he loved too much and served with a special zeal. He had to go to the temple of Archangel Gabriel every Saturday to cleanse the sanctuary, but also the whole temple so that the next one is ready for the divine service.
The most characteristic was that every Saturday he prepared himself for the ceremony of the immortal sacrifice. The people who knew him well assured us that it was his great joy, for he considered it a special blessing to have such a joke.
And his horrible murder? Like every single day, that same day he started walking on foot from the village that lived with his grandmother to come to the Orthodox College of Africa for his lessons. Nothing showed that this would be his last visit, his last lesson at the College at the Patriarchal School. 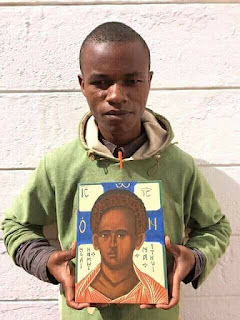 As always he talked to his classmates, attended his lessons, greeted his teachers with due respect and late afternoon he began his last trip without return.
Because of poverty, he wanted to make a small station in his uncle’s house to rest and dine with them after walking several kilometers. Within a few minutes, the unexpected has happened and no one has until now been aware of under what conditions the assassins made him.
It seems that before he defrocked he brutally tortured him, especially on his face, and in particular his eyes had almost gone. Martyr’s death.
A young man dedicated to God accepting this terrible bang while he was virtuous and pure, pure and humble the heart, rich with so many gifts and virtues. It was a brilliant star that enlightened them around him.
Among the various things people wanted to show their love for the unfortunate loss of this new one was also a song, which he often silenced himself. He said,

«My God is in me, my friend, and in all my moves I am present. It always leads me to the path of eternity where we will end in the end. I do not want the riches of this world to be respected and appreciated by people. And when I still have tribulations in my life, God is my companion and friend. »

Because his friends, and especially his fellow students and his fellow students from the Orthodox College of Africa, knew how much he loved this song, just before his burial, they all sang it, believing that they would cheer him where he was.
Angelic voices accompanied him to his last home. Did anyone think that the angels descended from heaven to earth to receive him gladly …
As every year, last year we invite young people from our region from neighboring countries to bring those who have talent in painting to come here to the Patriarchal School for hagiography classes.
In the end, with the hagiographer’s suggestion, each student had to paint a small picture to be graded, since at the end they always get a certificate of observation.
Elijah did it just like everyone else. In the photo he seems to keep the picture he has painted with his own hands. I pointed out in his local dialect and it clearly shows «God with us». This inscription has shocked the world because it encloses an intimate and sincere wish of the unhappy young hagiographer and priesthood that portrays his faith and his deep conviction for the presence of God in his life. It was the conclusion of all the course here on earth.

See also
Orthodox College of Africa, Nairobi, Kenya
New Martyrs
New Martyrs (tag in the other our blog)
Orthodox Kenya
How “White” is the Orthodox Church?
Orthodox Mission in Tropical Africa (& the Decolonization of Africa)
Ancient Christian faith (Orthodox Church) in Africa
Hymn to the African saints
The Orthodox Christian sentiment regarding the persecutions of Christians by Islamist
Herod's best friend!