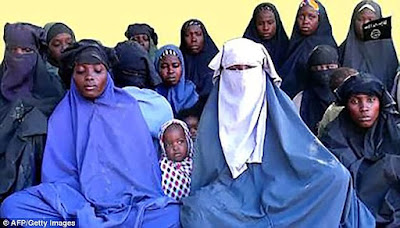 The jihadists gained worldwide notoriety in April 2014 when they abducted 276 girls from their school in Chibok, in neighbouring Borno state (from here)

Scott MacEachern is a professor of anthropology at Bowdoin College and author of the newly published Searching for Boko Haram: A History of Violence in Central Africa (Oxford University Press, 2018).

More than 100 teenage girls were seized by Boko Haram last week in Dapchi in Nigeria, a crime that echoes the notorious kidnapping of 276 young women in Chibok in April, 2014. There are some differences, especially in the fact that the girls taken at Dapchi are Muslim, while the Chibok girls were mostly Christian. But the parallels are more striking: an assault on a girls' school, confusion about whether the attackers were soldiers, changing stories by Nigerian government officials. How can we understand Boko Haram's targeting of girls' schools in these attacks?
Boko Haram, a brutal Islamist insurgency, kills people all over the region, in Nigeria but also in Cameroon, Niger and Chad. They kill men and women, young and old, Muslims and Christians, soldiers and civilians. However, they frequently target young women for abduction rather than murder. The young women who are kidnapped are "married" to Boko Haram insurgents, if we can use that term to describe this kind of sexual enslavement. "Marriage" involves forced conversion to Islam for Christians – and also, to some degree, for Muslim women, since Boko Haram describes Muslims who are not members of the group as "idol-worshippers."
In effect, Boko Haram leaders parcel out captured women to their footsoldiers through "marriage" as rewards for their support. This parallels the actions of slave-raiders in the region a century ago, who targeted young women and then similarly distributed them to their followers. Abubakar Shekau, the leader of Boko Haram, even threatened in a video to "sell [the Chibok girls] in the marketplace." It is no wonder that local people often identify Boko Haram as slave raiders.
However, other women have different stories. Given this horrific history of forced abduction and sexual enslavement, the notion that some women marry Boko Haram members willingly and support the insurgency might seem astonishing. Hilary Matfess details their accounts in her remarkable book Women and the War on Boko Haram: Women who voluntarily marry into Boko Haram describe their husbands as well-off, and describe generous allowances and presents. New brides receive their dowry payments from their husbands, instead of having them passed on to their parents. 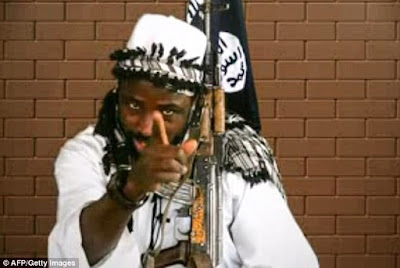 Boko Haram are led by Abubakar Shekau and have been fighting the government since 2009 (from here)
Perhaps most importantly, Boko Haram wives are expected to remain in purdah, seclusion from public contact, where they occupy themselves with household duties and child care. This frees them from the back-breaking labour of agricultural work and the fetching of firewood and water that occupies most women in rural northeast Nigeria. In fact, Boko Haram camps often do not engage in farming; instead, they raid neighbouring communities for food.
Purdah has historical roots in the Lake Chad Basin. In the 19th century and earlier, upper-class Muslim women in purdah were also excluded from agricultural labour, with their place in the fields taken by their husband's slaves. Today, women who have been kidnapped by Boko Haram are frequently forced to do menial labour, and those who are forcibly "married" to Boko Haram followers often do not have the same high status as those who join Boko Haram willingly. The historic distinction between upper-class "free" Muslim women and "enslaved" women undertaking physical labour is being reproduced by Boko Haram today, and it is the young women kidnapped by the terrorists who play the latter role.
This does not mean that Boko Haram simply duplicates social roles that existed a century or more ago.
For one thing, Boko Haram attacks girls' schools. They attack such places because young women can be found there, but they also attack Western systems of education, which Boko Haram describes as deceitful and useless. This doesn't consider the other ways in which women and girls are involved in the insurgency, most terribly as suicide bombers. We do not as yet understand the manipulation that leads women, as well as girls as young as seven or eight years old, to blow themselves up at security checkpoints or in mosques or markets. They must be seen as victims, not perpetrators, of these atrocities.
Rather, the similarities between women's experiences in the past and with Boko Haram today illustrate important social continuities in the Lake Chad Basin: patriarchal gender roles; agriculture and home life that depends upon the constant labour of women; and a continuing, brutal distinction between rich and poor.
Some young women navigate these savage inequalities by becoming willing members of Boko Haram, and sometimes its strongest adherents. Others, such as the teenage girls from Dapchi and Chibok, find themselves caught up unwillingly in these systems of terror.
We do not know if the Nigerian government's response to the Dapchi kidnappings will be more effective than was the case at Chibok. We must hope so: Many of the girls taken at Chibok in 2014 have not yet been returned to their families.
In the long run, only systemic change in economic and social systems – investment in education and job creation, civic engagement – will improve the lot of young people in northern Nigeria and make such terrorist movements less likely in future.

Boko Haram insurgency
Boko Haram Using More Children as Suicide Bombers, Unicef Says
People for sale - Exposing migrant slave auctions in Libya!!!
Traditionalist View on Sex Slavery in Islam
Slavery today!
St. Kyranna the New Martyr of Thessaloniki, Greece
African Women
The Worst Place to Be a Woman!...
About the Orthodox Church in Nigeria, Cameroon, Niger and Chad
Nigeria: seeking Christ amid increased dangers...
The Orthodox Christian sentiment regarding the persecutions of Christians by Islamists
A Christian perspective on Islam
From Islam to Christianity: Saints in the Way to the Lihgt
Paul, the Christian equivalent to Mohammed

St. John the Russian, the Free & Wonderworker Slave (May 27)
A family of slaves opposes an Empire: the Holy Martyrs Zoe & Hesperus, and their children sts Cyriacus & Theodulus