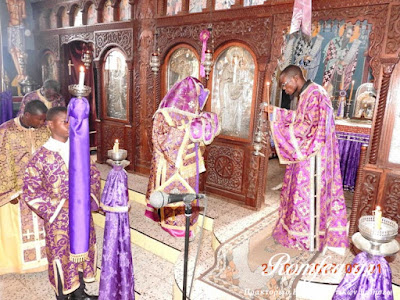 A reference point in the typiko of Great Lent is the communion of the Presanctified Precious Gifts. The discordance between the festal and joyful nature of the celebration of the Divine Eucharist and the compunction of Great Lent makes it inappropriate to celebrate the bloodless sacrifice on fast days. And yet, the importance of Holy Communion for the spiritual struggle of the faithful has established participation in the Presanctified Gifts even on such days.

The difference between the Presanctified Liturgy and the more common types of the Eucharist is that the Precious Gifts have already been sanctified as Body and Blood earlier, at the Divine Liturgy on the previous Saturday or Sunday. At the proskomidi, the celebrant takes out a second lamb [central portion of the loaf], which he places with the first on the paten. He sanctifies and elevates this as normal, and, after pouring the warm water into the chalice, immerses the second lamb in the precious blood and places it carefully in a special artoforio or tabernacle [a vessel kept on the holy alter where the reserved gifts are kept] until the day when the Presanctified is to take place. 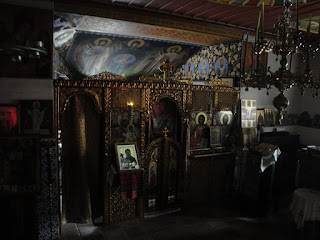 The service of the reception of the Presanctified Gifts is not contained in the seven services celebrated during the day and night, nor is it a Divine Liturgy, but simply a way of distributing the Precious Gifts, and is attached to Vespers. The singing of the ancient hymn “Now the powers…” marks the join between the two services. What happens before the hymn is Vespers and then after the hymn we move into the Presanctified. 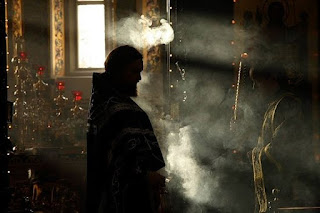 The composition of the Presanctified Liturgy is attributed to a number of Church Fathers, among whom were Epifanios of Cyprus, Yermanos of Constantinople and Pope Gregory the Dialogist. Also, in codex 766 of the national Library in Athens (16th century), there is indirect testimony to the fact that it is a product of the pen of Saint Gregory the Theologian. In particular, the codex states that at the end of the Presanctified Liturgy, we have the dismissal hymn and kontakio of Saint Gregory the Theologian, probably because of confusion with the Dialogist. Ioannis Foundoulis prefers that no tropario of any saint be sung, but rather that, after “Glory. Both now”, we should immediately have the tropario “At the prayer, Lord”. However that may be, the author is not known today. According to P. Trembelas, the attribution to Saint Gregory the Dialogist is most likely due to the fact that he was responsible for popularizing it in the West, since he introduced it into the form of service for Good Friday in the Church of Rome, according to the Roman rule.

Briefly, the structure of the service of the Presanctified is as follows. Essentially, it begins with the readings and the “Let my prayer” in Vespers and with the prayers for the catechumens and the faithful. Then comes the singing of “Now the powers”, and the celebrant censes the congregation. In the middle of this, we have the Entrance of the Holy Gifts, after which the hymn is completed. This is followed by a litany, the prayer “by placing the holy gifts on the holy altar”, the Lord’s Prayer, the two prayers of bowing the head and the exclamation “Let us attend. The Presanctified holy things to those who are holy”. Thereafter, the structure of the Presanctified is identical to that of the Divine Eucharist, with only a few differences in hymns and prayers. These are: a) instead of “We have seen the light”, we sing “I will bless the Lord”; b) the prayer read before the icon of Christ is “Almighty Lord” and c) the antidoro is given before the end of the service, “Through the prayers”, while psalms 33 and 144 are read. The last is the old order of service not only for the Presanctified but for the full Liturgy, too.

The availability of the Presanctified Gifts demonstrates the Church’s desire to meet the spiritual needs of its members. As the prime expression of the sacramental community, the Holy Eucharist is a necessary feature of the life of the faithful. Its absence would weaken the bond of the faithful with the Eucharistic assembly, but its presence, even through the dispensation of having the Presanctified, fortifies the faithful in prayer and fasting during the bright sadness that is Lent.

If Anyone Wants to Know what Orthodox Christians Believe…
Great Lent: Seeking the narrow path
The Great Lent in the Orthodox Church, “mother of chastity, accuser of sins, advocate of repentance, life of the angels and salvation of men” - Like Moses, Elijah, Daniel & the Lord...
The Akathist Hymn (a very concrete spiritual preparation for the Holy Week and Easter Services five Fridays in the Great Lent)