Small fires have already been lit in the streets of Antananarivo. Some of them by those living on the streets, others for the charcoals to start burning for the preparation of the morning beverage, which will cheat the poor people’s hunger. 5.30 am: Life in the city has already begun. Look at what vitality this eight-year-old boy is loading the jerrycan of water onto his back!
The cart-driver is pulling hard the so-called “sareti” and is struggling to carry as quickly as possible the furniture that has been loaded on it since the night before. He, himself, as usual, has undertaken the role of the driver as well as that of the beast of burden. The expected day-wage is 5,000 ariary, that is, 2 dollars. And this is so because the lady whose furniture he is being loaded with is well-off.
On his way to work, young Tahiri thinks to himself: “People in my country are struggling to survive. This is what I have to do as well. I must make my own family too. I may be poor, but God will provide for me as he does for all the poor people like me in the world.” 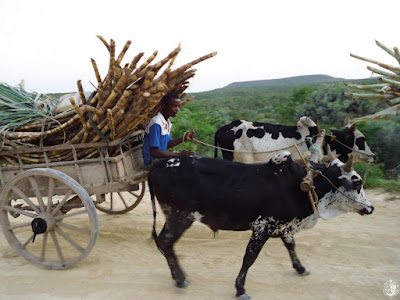 The blade of the meat-cutting machine has jammed up, and the customer is waiting for his meat. Very patiently and carefully, Tahiri takes out the protective part of the machine and starts cleaning it with his hand deep inside of it.
Suddenly the motor starts working… In no time, his right hand is cut off. Blood, pain, despair, tears, darkness. Everything around him seems to have collapsed.

In the surgery bed it is only a moan of pain one can hear. It took a moment for the mind to be lost and the dreams to be shattered. He is all alone. In the dizziness of sedation, what is left is pain and despair. Whatever he was building this morning, comes tumbling down now.
His watery eyes can make out a black figure going up and down the corridor. He stands for a while at the door of the surgery. Then he leaves. He comes and goes. But who cares? The pain is so intense that it is the only thing that matters now. As he is thinking of all these, Tahiri closes his eyes, for the sharp pain stings his body and heart mercilessly. 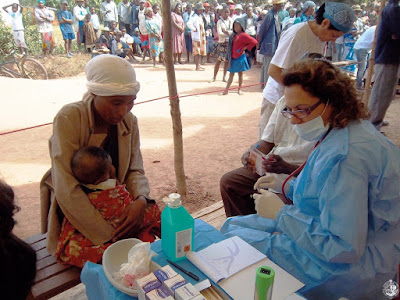 He has just recovered from the sedation but the pain still remains. While sobbing, his watery eyes fill with that black figure. Now it is as close as ever.
The man dressed in black is at his bedside, his hand on his pillow.
“Don’t cry. You will get well,” he says to him as sweetly and encouragingly as possible.
Through the pain and wonder, the young man’s weak voice is heard to be asking:
“Who are you?”

Home since then. It’s been almost two months. He is still aching, but at least, now he lives in hope. The black figure is by his side again; he is an Orthodox priest, his best friend now. It is nearly dawn.
– I wonder, will you forget me pretty soon? asks the priest.
– Never, says Tahiri. Neither you nor your words.
– I think one day we will be praying together.
– I’d love to. The Roman Catholics do not like you, though.
– But I do love them. I did not come here to steal but to give. The point is what you want. I have told you everything about God. Do you want to pray with me?
– It would be wonderful and I’d love to. But the Catholics support me financially. I’m a Catholic.
– I told you, I don’t steal. I only give. God will provide, my child.
– I don’t forget how much you have stood by me for so long. And you are still by my side. I cannot forget you.
– When you become Orthodox, this is going to be the greatest joy for me.
The young man nods his head.
Their left hands are joined in one now. By letting its last rays fall on the two men, the sun is playing its wonderful game really artistically as it eliminates the difference in color on the firmly joined hands of the black and the white man.
The young man looks at him. The priest pulls his hand hastily. He can hardly restrain his own tears.
“I have to go now, he says. “I’ll be back soon. Don’t be afraid.”

The guardian Angel of the town is already spreading over his warm purple-yellow “salutsa”. Underneath lies Antananarivo, his city under protection. He has taken his “lefu” in his hands in order to protect the children the Almighty God has entrusted him with. He is by their side, ready to protect them from every enemy and console the pain and tears of all those poor creatures, for whom no one has ever prayed before.
The night is falling. The two protagonists, each one on their own with their eyes shut, are already praying to the same God, separately the one from the other, and yet, the one for the other.
The curtain comes down here. This episode of life was real. The “author” was God Himself. The protagonists were real characters, but were kept anonymous out of respect. It is really awesome how God raises the curtain of life for each person, in an episode that may be repeated every day, here in Antananarivo or in every corner of the earth, where darkness and bitterness are transformed into light and joy by the Grace of God. 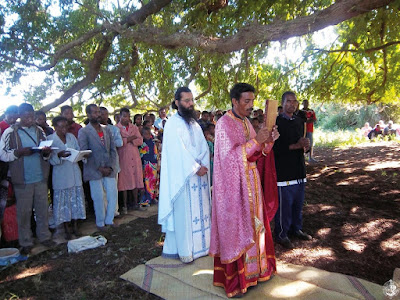 in Search of Orthodoxy (tag)