Mother of God, the Milk-Giver - a sacred depiction of motherhood in Orthodox Church


Milk-Giver Icon | Not Scandalized by the Incarnation 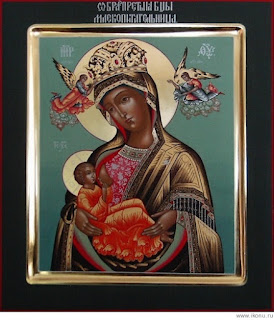 
A Reader's Guide to Orthodox Icons


On July 3, the Icon of the Virgin “Galaktotrophousa” (Γαλακτοτροφουσα, meaning “the Milk-Giver”) is celebrated. The Icon shows the Mother of God breast-feeding Christ. Not many modern icons use this composition, which may hide just how ancient and widespread this icon really is.
The specific Icon celebrated on July 3 (and January 12) dates from the 6th century A.D. and resided in St. Sabbas’ lavra (a type of monastic community). Before his death, St Sabbas prophetically stated that in time a pilgrim sharing the saint’s name, of royal lineage from Serbia, would visit, and to him the Icon of the Mother of God, the “Milk-Giver”, should be given as a blessing from the Monastery. God’s time is not like our time, and so it was not until 700 years later that the prophecy was fulfilled. The pilgrim was the Serbian prince Rastko Nemanjić, who had taken the monastic name “Sava” (i.e. Sabbas) when a youth. Coming to venerate the relics of St Sabbas, the elder’s episcopal staff fell at the young Sava’s feet. The monks inquired into the pilgrim’s identity, and hearing his name (and remembering the centuries-old prophecy) gave the Milk-Giver Icon along with another icon of the Theotokos, and St Sabbas’ staff. All three items ended up in the Hilandar Monastery on Mt Athos, which was founded by the Serbian Sava. The Milk-Giver Icon is still there to this day, in the Iconostasis of Hilandar’s church.

The Virgin Galaktotrophousa in the Royal Doors of the Hilandar Monastery

Like the dogmas of the Church, icons often arise as a response to heresy. In this light, it is not difficult to see why and how an icon of Mary breast-feeding the Christ-child would appear in the 6th century, and be associated with St Sabbas in particular. Sabbas was a strenuous opponent of the Monophysites, a group who believed Christ’s divine nature absorbed His human nature. The icon is a rebuttal of this position, as it shows Jesus Christ, truly God, suckling at His mother’s breast. 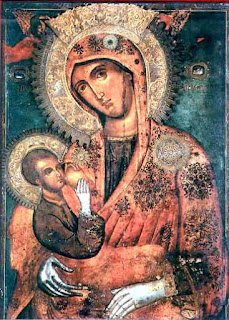 Monophysitism is just one flower of an all-pervasive weed that can has its root in one overriding feeling: scandal at the Incarnation. In other words, shock and revulsion at the idea that the All-Powerful Creator would take on corruptible human flesh, spend 9 months in the womb of a woman, pass through her vagina, and then spend the next few years a physically weak and helpless baby, totally dependent upon her. People have come up with a multitude of ways to deny this dogma of the Church. Another example is the Julian Heresy, which flourished in Egypt during the time of St Sabbas. Supported by the patriarch of the time, the belief was that Christ’s body was incorruptible (before His crucifixion). Again, the influence of being scandalized at the Son of God taking on human flesh is seen in this belief. A number of right-believing monks separated from the heretics and set up their own monasteries, which they named after the Theotokos, i.e. God’s human mother. One of these monasteries, the Syrian Monastery, still survives and it shouldn’t be surprising to see an ancient fresco of Christ suckling His mother there. Again, reacting against the misguided scandal of the Incarnation, the Milk-Giver Icon proclaims the Orthodox belief.
From the 6th century onwards the image of the Mother of God “Nourisher of Life” is always found without ever being common. Whenever it is found, both Mother and Child are stylized, with Mary’s exposed breast depicted proportionally smaller than is natural. This is because the icon is not painted to dwell upon the sensuality of Mary breastfeeding Jesus Christ, merely to proclaim it happened.
Copies of the Hilandar Milk-Giver Icon aside, today icons of this type are not very common, especially in Western Orthodox iconography. Is it because “scandal at the Incarnation” is no longer a problem among Christians? Don’t believe it. Even while openly proclaiming Christ’s two natures, the tendency to downplay or practically deny the humanity of Jesus is still something that lurks in the shadows. The Mother of God “Milk-Giver” Icon is still a powerful rebuttal to these beliefs, and a reminder that God’s love for us is not abstract but physical. 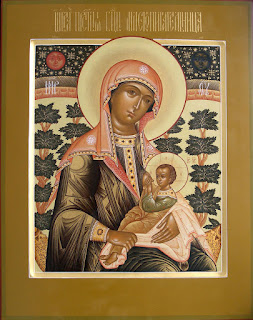 Collection of Milk-Giver Icons (МЛЕКОПИТАТЕЛЬНИЦА) with links to Russian sites and descriptions
Salutations to the Most Holy Theotokos (Mother of God)
Male and Female Created He Them
Mother of God (Virgin Mary), Orthodox Church and African peoples (& Why the Orthodox Honor Mary)
Bikira Maria, Mama wa Mungu
Maria in die Ortodoksie
Icon of Mother of God with Three Hands (in Hilandar Monastery) & here

The Mother of God as "Eye" and "Earth"
When the Orthodox Church celebrates pregnancy...
Icons of the Mother of God
Αναρτήθηκε από ΝΕΚΡΟΣ ΓΙΑ ΤΟΝ ΚΟΣΜΟ στις 2:36 μ.μ.