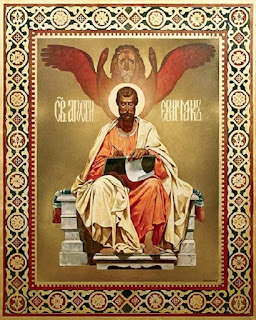 Vasili Nesterenko. An Étude for “Apostle
and Evangelist St Mark”. 1995 (from here).

About st Mark, please, see here:
Saint Apostle & Evangelist Mark, from Cyrene of North Africa, the founder of the Church of Alexandria (April 25 or Tuesday after Easter) 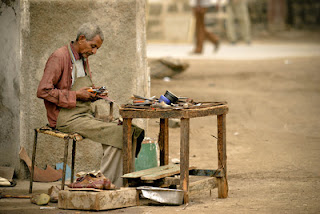 A cobbler at work in the port town of Massawa, Eritrea,
a country still recovering from decades of civil war (photo from here)


Anianus of Alexandria was the Bishop of Alexandria from 68 to 82, serving as the successor to the Apostle Mark the Evangelist. His feast day is April 25.
Anianus was a cobbler who was the first person that St. Mark won to Christianity after his arrival in Alexandria. Having stopped for Anianus to repair his sandal, Mark took the opportunity to preach the Gospel of Christianity to him after Anianus exclaimed "Heis ho Theos" ("God is one") when he cut himself making the repair.[1] Having shown himself a believer in monotheism, Anianus invited Mark to his home where he taught Anianus' family the Gospel and baptized all of them and then quickly converted a large number of the local people. 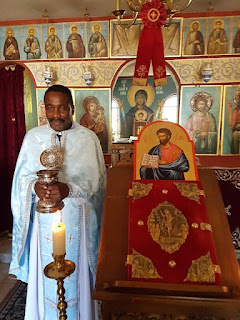 Before he temporarily left Alexandria, Mark ordained Anianus a bishop as well as three presbyters and seven deacons and charged them with overseeing the church of the area in his absence. After the martyrdom of Mark, Anianus succeeded him and led the church in Alexandria for the next fourteen years, ordaining new priests and deacons for the growing church.
St. Anianus died peacefully in the year 82 and was buried next to St. Mark at the church in Bucalis. 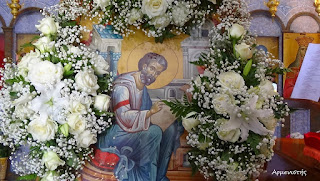 A greek holy icon of st Mark (from here)