Holy Martyr Terence with 40 others Holy Martyrs at Carthage 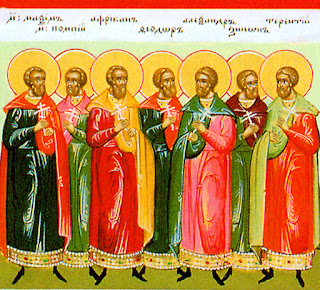 The Holy Martyr Terence and his companions suffered under the emperor Decius (249-251). The emperor issued an edict commanding all subjects to offer sacrifice to the pagan idols.

When the governor of Africa Fortunianus received this edict, he gathered the people into the city square, set out cruel instruments of torture and declared that everyone without exception had to offer the sacrifice to the idols.
Many, afraid of torture, complied. However, Saint Terence and forty other Christians bravely affirmed their faith in the Savior and ridiculed the idols. Fortunianus was amazed at their boldness and he asked how they as rational people, could confess as God, One Whom the Jews crucified as a malefactor.
Saint Terence answered that their belief was in the Savior, Who voluntarily endured death on the Cross and rose on the third day. Fortunianus saw that Terence inspired the others by his example, and so he ordered him to be isolated in prison with his three closest companions: Africanus (icon), Maximus, and Pompeius. Fortunianus was determined to force the rest of the martyrs, including Zeno, Alexander and Theodore, to renounce Christ.
Neither threats nor terrible tortures could sway the holy martyrs. They burned them with red-hot iron, they poured vinegar on the wounds, they sprinkled on salt, and they raked them with iron claws. In spite of their sufferings, the saints did not weaken in their confession of Christ, and the Lord gave them strength.

Fortunianus gave orders to lead the martyrs into the pagan temple, and once again he urged them to offer sacrifice to the idols. The valiant warriors of Christ cried out, “O Almighty God, Who once sent down fire on Sodom for its iniquity, destroy this impious temple of idolatry.” The idols fell down with a crash, and then the temple lay in ruins. The enraged governor gave orders to execute them, and the martyrs, glorifying God, bowed their necks beneath the executioner’s sword.
After the execution of the thirty-six martyrs, Fortunianus summoned Terence, Maximus, Africanus and Pompeius before him. He showed them the martyrs’ bodies and again urged them to offer sacrifice to the idols. The martyrs refused. The governor put heavy chains on them, and gave orders to starve them to death. By night, an angel of the Lord removed the martyrs’ chains and fed them.
In the morning, the guards found the saints cheerful and strong. Then Fortunianus ordered sorcerers and conjurers to carry snakes and all kinds of poisonous creatures into the prison. The guards looked into the cell through an opening in the ceiling and saw the martyrs unharmed, praying, and the snakes crawling at their feet. When the sorcerers opened the door of the prison cell, the snakes bit them. The furious Fortunianus gave orders to behead the holy martyrs. Christians took up their holy bodies and buried them with reverence outside the city.


Troparion — Tone 4
A chosen army of athletes from Africa contested nobly for the faith. / They were of one mind and heart / and of one accord in their struggles. / Now they intercede that we all may be saved.

Kontakion — Tone 1
Let us celebrate the memory of Terence and his companions / and draw near to receive healing. / For with grace and power of the Spirit / they heal the sicknesses of our souls.
St Miltiades the African Pope 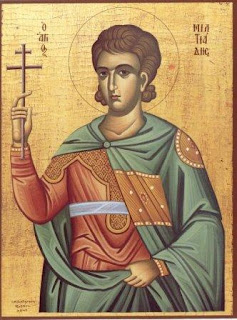 Our father among the saints Miltiades of Rome, also called Melchiades (Greek: Μελχιάδης ὁ Ἀφρικανός), was the bishop of the Church of Rome from 311 to 314. His episcopate marked the end of the church's persecutions under the Roman emperors and the advent of the Christian emperor, Constantine the Great. His feast day is December 10. [Our note: in the Greek Orthodox Church, April 10 - see here & here (icon)].
The early life of Miltiades is largely unknown. He apparently was a Berber from Africa. He was elected bishop of Rome after the cathedra had been vacant ten and a half months, since the death of Bishop Eusebius who had been banished by Western Roman emperor Maxentius to Sicily for involvement in factional violence within the church in Rome. Bp. Miltiades' episcopate began on July 2, 311.
At the time Bp. Miltiades began his episcopate, Galerius and his co-emperors issued a decree of toleration giving the Christians the legal right to practice their faith. After the defeat of Maxentius by emperor Constantine in October 312, Constantine took control of Rome. With the issuance of the Edict of Milan in 313, the Church began the recovery of church property that the state had confiscated during the persecutions. Also, Constantine presented the bishop with the Lateran Palace that came to be the papal residence and seat of church governance in Italy.
On October 2, 313, Bp. Miltiades convened a synod of eighteen bishops from Gaul and Italy at the Lateran Palace to consider the election of bishops for the African churches that were in the midst of the Donatist controversy. After three days considering the matter, the synod elected and consecrated Caecilian as the legitimate bishop of Carthage and declared Donatism to be heretical, an important decision during the Donatist controversy.
Bp. Miltiades reposed on January 10, 314 and was buried in the Catacomb of Callixtus. His veneration as a saint began shortly after his death. He was already commemorated as a saint on January 10 later in the fourth century.

The Ancient Christianity (Orthodox Church) in Tunisia & Saint Julia of Carthage
The Last Christians of North-West Africa
St Cyprian of Carthage, the leading bishop of the Church of Africa during the mid-third century
The Scillitan Martyrs of Numidia, the Protomartyrs of Africa
About the African Martyrs Perpetua, Felicity, Saturus, Saturnius, Revocatus and Secundulus
Hieromartyr Theodore, the Bishop of Cyrene in Libya, the holy women martyrs Cyprilla, Lucia and Aroa, and all who had accepted Baptism from the holy bishop
The Holy Martyr Callistratus, the Tunisian soldier, and the 49 holy soldiers who martyred with him
St. Augustine (June 15): "love the sinner, hate the sin"
Ancient Orthodox Holy Martyrs from Tunisia in February 21
The Calendar of Carthage, an ancient Orthodox Christian document from Tunisia
OBSERVING THE FEAST DAYS OF THE AFRICAN SAINTS