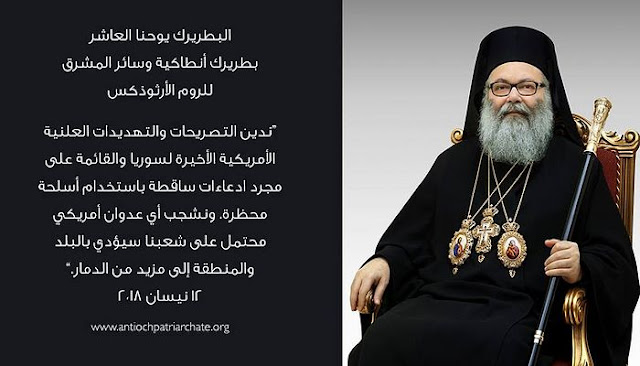 Orthodox Christianity
Damascus, Syria, April 13, 2018
His Beatitude Patriarch John X of Antioch and All the East has released a short statement in response to recent tweets from President Donald Trump about the possibility of war in Syria.
The statement, which condemns the president’s threats of intervention in Syria, has been posted on the Antiochian Patriarchate’s official Facebook page.
“We deplore any possible American aggression on our people,” the spiritual head of Antioch states.
Syrian opposition activists, rescue workers, and medics are claiming that more than 40 people were killed on Saturday when bombs filled with toxic chemicals were dropped on the town of Douma by government forces. The town was the last in the Eastern Ghouta region still held by rebels, reports the BBC.
It has since been taken back by pro-Assad forces.
Bashar al-Assad’s government has categorically denied perpetrating any such attack, although many governments and media outlets have already assumed that it did.
Further, Russian Armed Forces Chief of General Staff Valery Gerasimov announced one month ago, on March 13, that the Russian Defense Ministry had obtained “reliable information” that just such an attack would be carried out by terrorists in the Eastern Ghouta region and would be blamed on the government, as can be seen in a Sputnik video. Russian Foreign Minister Sergei Lavrov has repeated this claim since the alleged attack.
In response to the news of an attack, President Donald Trump tweeted on April 8, “Many dead, including women and children in mindless CHEMICAL attack in Syria… President Putin, Russia and Iran are responsible for backing Animal Assad. Big price to pay.”
Following Russia’s response that it would defend Syria from any U.S. attack, Trump tweeted on April 11, “Russia vows to shoot down any and all missiles fired at Syria. Get ready Russia, because they will be coming, nice and new and “smart!” You shouldn’t be partners with a Gas Killing Animal who kills his people and enjoys it!”
In response to the president’s tweets and to rising global tensions, Pat. John X of Antioch released a short statement yesterday:
We condemn recent US public statements and threats to Syria based on mere allegations of using banned weapons. We deplore any possible American aggression on our people that will cause the country and the region to be further devastated.
The patriarch’s reference to “mere allegations of using banned weapons” is reflected in yesterday’s statements from Defense Secretary General Jim Mattis, in which he acknowledged that the U.S. currently has no proof not only that the Syrian government was behind the chemical attack, but that a chemical attack even happened.
In a testimony before the House Armed Services Committee, Mattis cautioned against launching an attack against Syria too hastily, stating that the U.S. and its allies “don’t have evidence” that the Syrian regime attacked its own people. Further, it is as yet not proven that such an attack even occurred, although he personally believes one did. “I believe there was a chemical attack and we’re looking for the evidence,” Mattis said, reports military.com.
He further notes that even the work of an investigative team will shed no light on who was behind the alleged attack: “We will not know who did it. Only that it happened. That's where we're at right now,” Mattis told the committee.
President Trump's latest tweet, from April 12, shows him backing off somewhat from his earlier messages: “Never said when an attack on Syria would take place. Could be very soon or not so soon at all!”
Αναρτήθηκε από ΝΕΚΡΟΣ ΓΙΑ ΤΟΝ ΚΟΣΜΟ στις 7:22 π.μ.