Saint Isidora of Tabenna, the Fool For Christ (Feast Day May 10) 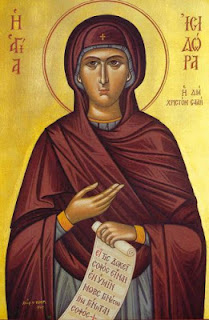 At the Convent of the Great Pachomios, in Tabennesis, there lived another nun, Isidora, who pretended, for Christ’s sake, to be insane and a demoniac.
To such an extent did the others abhor her, that they did not eat with her; this is something that she, herself, had chosen. She moved about the kitchen doing every sort of chore, and was, as they say, the scrubbing-cloth of the monastery, while she put into practice the command: “Whosoever of you believes that he is wise by the measure of this world, may he become a fool, so as to become truly wise.”
She served the Convent with a rag wrapped around her head, while all of the others had their hair cropped short and wore koukoulia.
Not one of the four-hundred nuns had ever seen her eat normally so much as once in her life. She swept the Trapeza and washed the pots; the crumbs and leftovers were sufficient for her, because she never sat at table nor touched a piece of bread.
Never did she insult anyone, never was she resentful, and never did she utter a superfluous word, despite the fact that they buffeted her, insulted her, railed at her and spit at her. 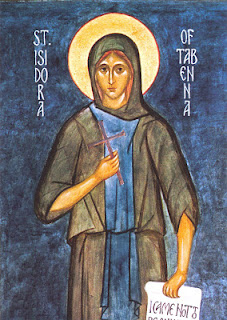 An Angel appeared to St. Piteroum, a man confirmed in virtues who lived in asceticism on Mt. Porphyrite, and said to him:
“Why do you boast that you are pious by remaining in this place? Would you like to meet a woman who is more pious than you? Go to the Convent of those of Tabennesis, and there you will find a nun who wears a crown on her head. She is superior to you. She contends with such a multitude, and yet her heart has never distanced itself from God. As for you, you sit here, but your mind wanders through the cities."
Hence, he who had never before left his cell arose and besought the spiritual Fathers to allow him to visit the Convent. Since he was a renowned Elder, they gave him leave.
When he entered, he asked to see all of the nuns, but St. Isidora did not appear. Finally, he said to them: “Bring them all to me. One is missing.” They answered him: “There is one more in the kitchen who is a fool.” (So do they call those possessed by a demon.) He said to them: “Bring her to me also. Allow me to see her.” They went and called her, but she did not submit, either because she understood what was about to happen or because it had been revealed to her. So they dragged her by force, telling her: “The holy Piteroum wishes to see you” (he was, to be sure, well known). 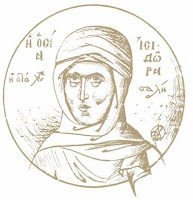 When she had presented herself, the Saint noticed the rag on her forehead (her “crown”), fell down before her, and said: “Bless me.” In the same way, she also fell at his feet, saying: “You bless me, my lord.”
Astonished, they all told him: “Abba, do not debase yourself; she is a fool.” Piteroum silenced them with the words: “You are the fools; she is my and your Amma—thus are spiritual Mothers called—, and I pray that I might be found to be her equal on the Day of Judgment.”
Having heard these things, the nuns fell at his feet, and each one confessed the ways in which she had affronted the Saint. One said that she poured filthy dish water on her, another that she struck her with her fists, and yet another that she had smeared her nostrils with mustard. All of them confessed the outrages they had committed against her. St. Piteroum prayed for them and departed.
Several days having passed, the fool was not able to bear the glory and honors shown to her by her sisters and, having wearied of their apologies, she left the monastery in secret. No one ever learned where she went, where she hid herself, or how she died.

A saint who has the title Fool-for-Christ is one who is known for his apparent, yet holy, insanity. This title in Russian is Yurodivyi.


Let no man deceive himself. If any man among you seemeth to be wise in this world, let him become a fool, that he may be wise. For the wisdom of this world is foolishness with God. For it is written, He taketh the wise in their own craftiness. (1 Corinthians 3:18-19 KJV)

One form of the ascetic Christian life is called foolishness for the sake of Christ. The fool-for-Christ set for himself the task of battling within himself the root of all sin, pride. In order to accomplish this he took on an unusual style of life, appearing as someone bereft of his mental faculties, thus bringing upon himself the ridicule of others. In addition he exposed the evil in the world through metaphorical and symbolic words and actions. He took this ascetic endeavor upon himself in order to humble himself and to also more effectively influence others, since most people respond to the usual ordinary sermon with indifference. The spiritual feat of foolishness for Christ was especially widespread in Russia. --(Excerpted from The Law of God, Holy Trinity Monastery, Jordanville, NY: 1993)

Saint Andrew of Constantinople is considered to be the first such saint, although Saint Basil of Moscow is also widely known. [More & List of Holy Fools-for-Christ here]

Ancient Christian faith (Orthodox Church) in Africa
Dream Team of the Desert
Orthodox Monasticism
LIVE, BEYOND THE LIMITS!
The holy anarchists... in the Egyptian Desert
Hymn to the African Saints
Theosis (deification): The True Purpose of Human Life
The Kingdom of Heaven, where racial discrimination has no place