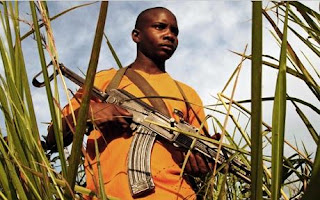 
A rise of as little as 1C could make civil conflict in sub-Saharan Africa more than 50 per cent more likely, according to the study.
Marshall Burke, a University of California economist and the study's lead author, said: "Our study finds that climate change could increase the risk of African civil war by over 50 percent in 2030 relative to 1990, with huge potential costs to human livelihoods."
Small changes to temperature will affect crop growth, and most of sub-Saharan Africa’s poor rely on agriculture for their livelihood.
Edward Miguel, professor of economics at UC Berkeley, said: "When temperatures rise, the livelihoods of many in Africa suffer greatly, and the disadvantaged become more likely to take up arms."
The study, published in Proceedings of the National Academy of Sciences (PNAS), is the first hard evidence linking global warming to fighting. It is based on data from 20 global warming models and a historical examination of the links between climate and conflict in sub-Saharan Africa.


The researchers found that, between 1980 and 2002, civil wars were much more likely in warmer years. In years that were one degree above average, the risk of conflict rose by nearly 50 per cent.
The study’s co-author, earth scientist David Lobell, said: "On average, the models suggest that temperatures over the African continent will increase by a little over one degree Celsius by 2030.
"Given the strong historical relationship between temperature rise and conflict, this expected future rise in temperature is enough to cause big increases in the likelihood of conflict.”
The study suggested that a one-degree rise could translate to a 55 per cent risk increase by 2030, which in turn would lead to 390,000 deaths in combat, assuming future wars are as deadly as recent ones.
The researchers have urged governments in Africa and worldwide to hasten and expand policies to help the continent adapt to the effects of climate change.
Mr Burke said: "Our findings provide strong impetus to ramp up investments in African adaptation to climate change by such steps as developing crop varieties less sensitive to extreme heat and promoting insurance plans to help protect farmers from adverse effects of the hotter climate.
"If the sub-Saharan climate continues to warm and little is done to help its countries better adapt to high temperatures, the human costs are likely to be staggering."
Millions of people have died in Africa in civil wars in the last decade, including more than 5.4 million in the Democratic Republic of Congo alone.