"There is great wailing in the land of the black people because of land hunger, you fools and wise people alike, is there any among you who is not aware of the overcrowding in our land.
... Long ago the Europeans came upon us with weapons of war and they drove us out and took our land. Go away, go away you Europeans (Leakey 1954: 63-4)"

From the "Africa's unwritten literatures"

Ruth Finnegan's Oral Literature in Africa was first published in 1970, and since then has been widely praised as one of the most important books in its field. Based on years of fieldwork, the study traces the history of storytelling across the continent of Africa. This revised edition makes Finnegan's ground-breaking research available to the next generation of scholars. It includes a new introduction, additional images and an updated bibliography, as well as its original chapters on poetry, prose, "drum language" and drama, and an overview of the social, linguistic and historical background of oral literature in Africa.
This book is the first volume in the World Oral Literature Series, an ongoing collaboration between OBP and World Oral Literature Project. A free online archive of recordings and photographs that Finnegan made during her fieldwork in the late 1960s is hosted by the World Oral Literature Project and can also be accessed from publisher's website (from here).

Ruth Finnegan, OBE, author of The Black Inked Pearl, is a renowned scholar and celebrated writer who is Emeritus Professor, the Open University, a Fellow of the British Academy, and an Honorary Fellow of Somerville College Oxford. She was born and reared in Ulster and sent to a Quaker school filled with biblical texts and music, which are reflected in the novel. First-class Oxford degrees in classics and philosophy were followed by African fieldwork, which Ruth describes as “totally inspiring for my life and work.” She returned to Oxford for a doctorate in anthropology before university teaching in Africa and briefly in Fiji, and finally the Open University in the U.K. She has three wonderful daughters and five grandchildren, and she lives with her husband and two cairn terriers in Old Bletchley, Buckinghamshire (from here). 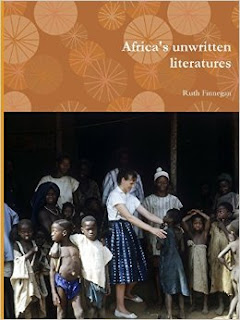 Orthodox Mission in Tropical Africa (& the Decolonization of Africa)

How “White” is the Orthodox Church?