Albinos killings for black magic in Tanzania, Burundi and Swaziland


Ablinos in Tanzania live in fear 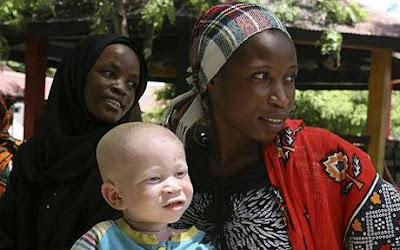 Seven new albino killings have been reported in Tanzania and Burundi amid signs that the lucrative trade in their body parts has not waned.


Under the Same Sun, a Vancouver-based NGO, put the toll of albino murders at 57 in Tanzania.
The group reported the killing on May 2 of a 28 year-old albino woman and her four year-old son in Cendajuru, on Burundi's border with Tanzania.
The two had their limbs and organs hacked off by a gang of nine armed men, and the boy's non-albino grandfather who intervened to stop them was killed on the spot, the group said, citing Burundi's police chief Deogratias Ntahompagaze.
Under the Same Sun noted another murder and four attempted murders of albinos in Tanzania between February and April.
"This brings the total in Tanzania to 57 murders and six attempted murders, where victims lost limbs. In Burundi the total is 14 murders. These are only the documented cases. The numbers are likely much higher - estimates suggesting well over a hundred in the last two years," the NGO said.
"Sadly justice has been far too slow in coming. Of the 63 reported cases in Tanzania, a mere two have been brought to conviction in the last two years. In sharp contrast, 12 of Burundi's 14 cases have led to convictions," the group said.
The wave of albino killings started in 2007, fuelled by the sale of their highly-prized body parts to witch doctors across the region who use them to concoct wealth-enhancing charms.
The Tanzanian police estimates at £50,000 "the value to witch doctors of a complete set of albino body parts, including all four limbs, genitals, ears, nose and tongue."
Albinism is a congenital lack of the melanin pigment in the skin, eyes and hair which protects from the sun's ultraviolets. Albinos are vulnerable to medical complications as well as social discrimination in Africa.
Of about 150,000 albinos in Tanzania, a country of some 35 million, some 8,000 are registered with the Tanzania Albino Society. Some families kill albino babies at birth to avoid discrimination, authorities say.


Albino girl, 11, killed and beheaded in Swaziland ’for witchcraft’ 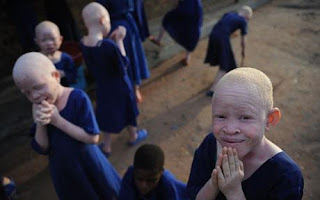 Witchcraft in Congo: Testimonies from the Orthodox Mission in Africa
Two miracles of the Holy Cross in Africa (Congo)
Witchcraft (tag)
"They are indigenous Sierra Leoneans who happen to be albinos..."