CHRIST IS RISEN! TRULY HE IS RISEN! 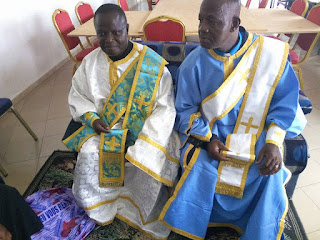 Orthodox Diacons from Ivory Coast (from here)
"As you see, He offers you a Shepherd; for this is what your Good Shepherd,
who lays down his life for his sheep, is hoping and praying for, and he asks from you his subjects; and he gives you himself double instead of single, and makes the staff of his old age a staff for your spirit. And he adds to the inanimate temple a living one; to that exceedingly beautiful and heavenly shrine, this poor and small one, yet to him of great value, and built too with much sweat and many labours. Would that I could say it is worthy of his labours. And he places at your disposal all that belongs to him (O great generosity!- or it would be truer to say, O fatherly love!) his hoar hairs, his youth, the temple, the high priest, the testator, the heir, the discourses which you were longing for; and of these not such as are vain and poured out into the air, and which reach no further than the outward ear; but those which the Spirit writes and engraves on tables of stone, or of flesh, not merely superficially graven, nor easily to be rubbed off, but marked very deep, not with ink, but with grace."


St. Gregory the Theologian, On the Resurrection.
St. Simon of Cyrene Orthodox Mission

"Whosoever is a devout lover of God, let him enjoy this beautiful bright Festival..." 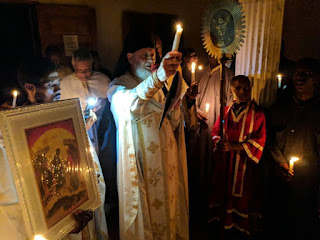 "Whosoever is a devout lover of God, let him enjoy this beautiful bright Festival. And whosoever is a grateful servant, let him joyously enter into the joy of his Lord. And if any be weary with fasting, let him now receive his reward. If any has toiled from the first hour let him receive his just debt. If any came after the third let him gratefully celebrate. If any arrived after the sixth, let him not doubt; for he too shall sustain no loss. If any have delayed to the ninth, let him come without hesitation. If any arrived only at the eleventh hour, let him not be afraid by reason of his delay; for the Master is gracious and receives the last, even as the first. He gives rest to him who arrives at the eleventh hour, as well as him, who has laboured from the first. He is merciful to the one who delays and nourishes the first. He gives also to the one, and to the other He is gracious. He accepts the works, as He greets the endeavour, He honours the deed, and the intent He commends.
Let all of you then enter into the joy of your Lord. The first and second enjoy your reward. You rich and poor, rejoice together. You temperate and you heedless, honour the day. You who fasted, and you who did not, rejoice today. The table is richly laden. All of you, fare sumptuously on it. The Calf is a fatted one; let no one go away hungry. All of you enjoy the banquet of faith. All of you enjoy the riches of His goodness. Let no one grieve poverty; for the universal Kingdom has been revealed.
Let no one grieve over sins; for forgiveness has dawned from the tomb. Let no one fear death; for the Death of our Saviour has set us free. He has destroyed it by enduring it.
He despoiled Hades, when He descended thereto. He embittered it, having tasted of His flesh. Isaiah foretold this when he cried out: “You, O Hades, have been embittered by encountering Him below.” It was embittered, for it was abolished. It was embittered, for it was mocked. It was embittered, for it was slain. It was embittered, for it was annihilated. It was embittered, for it is now made captive. It took a body, and, lo, it discovered God. It took earth and, behold! It encountered Heaven. It took what it saw, and was overcome by what it could not see. O death, where is your sting? O Hades, where is your victory? Christ is risen, and you are annihilated. Christ is risen, and the demons have fallen. Christ is risen, and the Angels rejoice. Christ is risen, and life is liberated. Christ is risen, and the tomb is emptied of the dead; for Christ, having risen from the dead, has become the first fruits of those that who fall asleep. To Him be the glory and the dominion to the Ages of Ages.
Amen."

Click
Three Holy Hierarchs: Synaxis of the Ecumenical Teachers and Hierarchs Basil the Great, Gregory the Theologian, and John Chrysostom
Orthodox Sierra Leone
The Wisdom of the Orthodox Church in Burundi: Victory Against Death - The Sadness and Joy of Holy Saturday!
Christ is Risen (in Africa)! Orthodox Holy Easter (Pascha): the resurrection of the race of mankind
About The Paschal Lamb
The Icon of Resurrection or The descent into Hades
The Lord’s Pascha
in Search of Orthodoxy
Why Orthodox Men Love Church

The Way - An introduction to the Orthodox Faith
Yesu Kristo - Mungu akawa mtu na mtu inakuwa kama mungu
Theosis (deification): The True Purpose of Human Life
Theosis, St. Silouan and Elder Sophrony
The Church as the Liberated Zone: "All we Christians are terrorists..." (and 2 videos, from Tanzania, Maasai, & DRC)