Eldress Konstantia from Africa, a Saintess in Greece 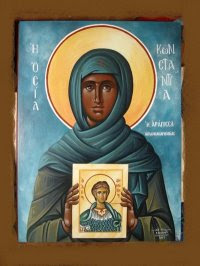 The eldress Konstantia lived in the first half of the 19th century and came from the land of Africa. She served as a slave in the household of a Turk, who was a resident of the old city of Zaverda. For some unknown reason till this day, she was abandoned to her fate by the Turks who after the liberation of the Greek nation left the area. She possibly could have escaped by her own means, but found refuge in the Holy Monastery of Saint Demetrios of Zaverda (now Paleros Aitoloakarnania, Greece) in which she received Holy Baptism and later the Angelic Schema. She lived here for many decades, adorning her life ascetically with the virtues and helping her neighbor in every possible way.


She highlighted the Monastery as a spiritual oasis in which all the downtrodden found refuge. Her physical and spiritual asceticism reached the height of the great male ascetics. God graced her with many gifts, such as that of clairvoyance and wonderworking. And Saint Demetrios, the protector of the Holy Monastery, made her worthy to see him visually and appeared to her and directed her in her spiritual struggle and in the struggle for the correct functioning of the Monastery through which many people were spiritually benefited. Her life ended peacefully in the Monastery she so loved and was buried within it.


The translation of her holy relics took place in 2004 and were stored in a wooden coffin in the Katholikon of the Monastery. On 2 February 2009 the holy relics of Eldress Konstantia were stolen from the Monastery of Saint Demetrios, but were later returned.

In Search of Orthodoxy (tag)