Mission during the "Covid era" 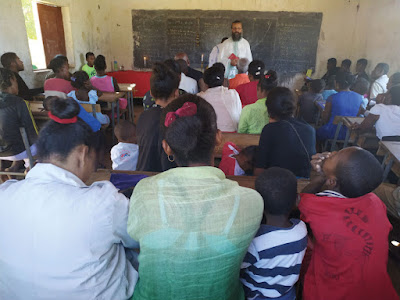 There are many who often ask what would be the most important quality that one could have for missionary work. So we all struggle to educate ourselves to be trained accordingly for such work – with the appropriate learning, of languages, of planning, of generally fortifying ourselves from all sides in order to “succeed”.

However, we forget to ask ourselves the most basic thing: “What, finally, does missionary work entail?” In which case, most of us fallaciously define missionary work as something topical (in a continent), tropical (in endless adventures) and even quantitatively (in statistics and prognoses).

Although wanting to reply to the first question, let us better begin with the second one. Do you want to know what qualities you must have for missionary work? Then just take a look at the centuries-long history of the Church in order to become aware of what speaks inside us – inside our heart.

So, let us take a look back in history. Where did Christ preach? In His own homeland – in the land where He grew up. Where did the first Church commence from? From Jerusalem. What was the Apostle Paul’s level of education and what was his profession? He was a good fisherman. Did all the Apostles suffer martyrdom and die? Undoubtedly not. Where did the first Christians preach about Christ and the new Faith? Mostly to their closest brethren. Who did the monks of the Nitria desert have nearby to catechize and evangelize, with Anthony the Great as their head? Obviously their own brethren and co-strugglers, the ascetic monks. Where did the indigent, labouring heads of families implement the commandment of love? On their children. Weren’t all of the above instances missionaries? And the monk who is fervently in prayer in his monastery cell for the love of Christ: isn’t his a missionary labour also?

Subsequently, the only quality that moves the strings of a mission – and naturally defines it – is Love. So, how can anyone teach about Christ - Who is Love Incarnate - when one is empty of love inside him? So, what, in the long run, is the motive for missionary labours, when that virtue is absent? But let’s mention an example now:

Recently an acquaintance and good friend of mine fell ill from Covid, in an African land. He narrated the following to me:

“Father, the test had just come back positive, and I was immediately hospitalized. I was entirely alone. There were no Greeks next to me. The only things keeping me company were the prayers of the Patriarch, our good fathers, and my family in Greece. I was isolated in a room that initially had no water. The food was terrible. No pharmaceutical regimen whatsoever. The only thing they gave me was some oxygen – for which I was grateful to the medical staff. They were the only ones consoling me, whenever the doctors made their rounds. Only then did I breathe with some relief.

However, in the midst of that infinite loneliness, God had something wondrous in store for me. It was the driver of the missionary group. He is a young native, who had been catechized by us and was baptized Orthodox by the Grace of God. He incessantly sent me written messages, as I was unable to speak due to my difficulty breathing. He brought me food and would take back the leftovers every day – twice a day – and would even clean the vessels in order to bring me the next, freshly cooked meal, albeit aware of the imminent danger of his becoming contaminated – something that actually happened, as he later told me.. He persisted in taking my garments so he could wash them. He prayed incessantly for my recovery, and also gathered his acquaintances and his closest brethren to pray together. When I was intubated for oxygen, albeit unable to speak to him, he told me later how he was desperately concerned about the outcome of the illness. He was also the one who came after three weeks with the car to pick me up directly from the Covid room, and was hugging and kissing me all that afternoon, overwhelmed with joy and relief for my recovery.

So now I ask you: who was doing a missionary labour during all those days of loneliness and agony? Who was the missionary in this instance? Well it certainly wasn’t me...”

Some say that in the post-Covid era everything will be different.

Nevertheless, the Covid era does have one basic benefit. Mankind came face to face with its unending loneliness and at the same time with its only companion: Christ’s Love. It is the Love that so miraculously manifests itself in the presence of those few people who stand by the side of Covid patients, the undoubtedly heroic medical personnel, but above all, in the inner consolation inspired by the Grace of the Paraclete, from Whom springs forth every good thing in this very lonesome world of ours.

Missionary labours are, after all, nothing more than the recognition and acceptance of the Love within our heart; its recognition by our very existence, and the passion to give it freely to our fellow-man, the way it was given by God.

Whoever succeeds in accepting this reality inside him and puts it to use, deserves to be named a missionary. Our era gives us this wondrous opportunity, for self-reprimand and self-awareness.

So, let us seize this opportunity now, in the new “Covid era”.