Orthodox Patriarchate of Alexandria & all Africa 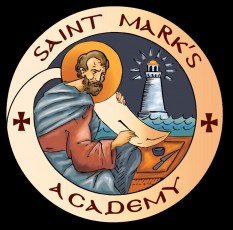 On Monday 29th January, His Beatitude Theodoros II, Pope and Patriarch of Alexandria and All Africa, together with His Eminence Damaskinos Metropolitan of Johannesburg and Pretoria, went to the Greek-English Educational Institute “Saheti”, which is attended by 1300 pupils at all levels, receiving Greek Orthodox Education.
The Alexandrian Primate was welcomed there by the Chairman, the teachers of the Educational Institute as well as the many pupils whom he thanked warmly for the welcome.
Addressing the Teachers’ Association, he emphasized the importance of their teaching work, because they become “teachers in Christ” of the children.
With particular joy, His Beatitude announced the beginning of the operation of a Theological Academy of the Patriarchate of Alexandria, “Apostle Mark”, at which students from around the world who wish to get to know Orthodoxy will be able to follow online lessons (through email and social media). They will be taught in English at the Theological Academy and supervised by experienced teachers, in the subjects of Church History, Dogmatic Orthodox Spirituality, Liturgics, Christian Ethics, Pastoral Theology, Ecumenical Movement, with emphasis on forms of contemporary Theology (African Theology, Theology of Liberation) in the African and Missionary World.
In his address, His Beatitude thanked the Very Reverend Petros Parginos, a teacher at Saheti, for his decisive contribution and effort made to establish the Academy, and to the “Saheti” Institute in the person of Chairman Andreas Stephanou, for the support of this project and the hosting of the Academy on the premises of the Institute. 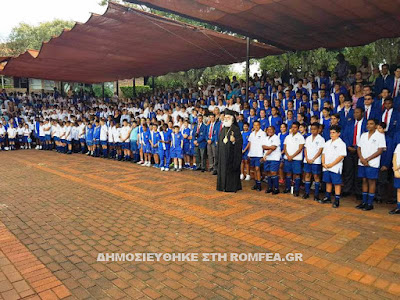 Also with particular joy, the Patriarch announced his initiative taken for the organization by the Holy Metropolis of Johannesburg and Pretoria, of the 1st Youth Festival in the country, where young people from South Africa will participate in various activities which will be organized.
His Beatitude then conducted the Sanctification of Waters Service for the start of the new academic year of “Saheti” before all the pupils and teachers, wishing them strength, patience and persistence in their studies. This was immediately followed by the cutting of the Vasilopita.
Following the function, His Beatitude went to the capita, Pretoria, where at the Ambassadorial Residence of the Greek Ambassador Mr. Kouvaritakis, he had the opportunity of meeting with all the Ambassadors of Orthodox countries, Russia, Serbia, Romania, Bulgaria and Belarus in South Africa, the Egyptian Ambassador Mr. Sherif Issa, the Delegate from the Ukraine, the Consul General of Greece in Johannesburg as well as the entire Committee of the Hellenic Community of Pretoria, under the Chairman Mr. Gregory Patsalosavvis.
That same night, having concluded his official visit to Cape Town and Namibia, the Alexandrian Primate departed for Cairo on Egypt Air.

«African needs to be helped, to find his divine roots, for his soul to be at peace, to become united with God...»
"The African culture is ripe and ready for Orthodoxy because her people already live in community..."
Eight principal areas of convergence between African spirituality and Ancient Christianity in Search of Orthodoxy
"THE WAY" - An Introduction to the Orthodox Faith
Αναρτήθηκε από ΝΕΚΡΟΣ ΓΙΑ ΤΟΝ ΚΟΣΜΟ στις 12:44 μ.μ.