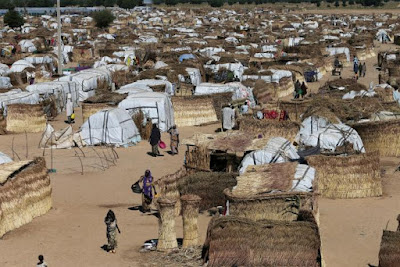 af.reuters.com, September 8, 2017
LONDON (Thomson Reuters Foundation) - At least 1.4 million people uprooted by Boko Haram’s insurgency in northeast Nigeria are living in ‘cholera hotspots’, prey to an outbreak of the deadly disease which is sweeping through camps for the displaced, the United Nations said on Thursday.
An estimated 28 people have died from cholera in the conflict-hit region, while about 837 are suspected to have been infected with the disease, including at least 145 children under the age of five, said the U.N. children’s agency (UNICEF).
The outbreak was first identified last week in the Muna Garage camp in Maiduguri, the capital of Borno state, which is the heart of jihadist group Boko Haram’s brutal eight-year campaign to carve out an Islamic caliphate in northeast Nigeria.

About 1.8 million people have abandoned their homes because of violence or food shortages, U.N. agencies say, and many live in camps for the displaced throughout northeast Nigeria.
Several aid agencies last month told the Thomson Reuters Foundation that Nigeria’s rainy season could spread disease in already unsanitary displacement camps, and 350,000 uprooted children aged under five are at risk of cholera, UNICEF said.
“Cholera is difficult for young children to withstand at any time, but becomes a crisis for survival when their resilience is already weakened by malnutrition, malaria and other waterborne diseases,” UNICEF’s Pernille Ironside said in a statement.
“Cholera is one more threat amongst many that children in northeast Nigeria are battling today in order to survive,” added Ironside, UNICEF’s deputy representative in Nigeria.

UNICEF said aid agencies have set up a cholera treatment centre at the Muna Garage camp, chlorinated water in camps and host communities to curb the outbreak, and mobilised volunteers and local leaders to refer suspected cases to health facilities.
The disease, which spreads through contaminated food and drinking water, causes diarrhea, nausea and vomiting. It can kill within hours if left untreated, but most patients recover if treated promptly with oral rehydration salts.
The latest figures represent a 3.3 percent fatality rate - well above the 1 percent rate that the World Health Organization rates as an emergency. The short incubation period of two hours to five days means the disease can spread with explosive speed.
More than 20,000 people have been killed in the conflict with Boko Haram, at least 2.2 million have been displaced, and 5.2 million in the northeast are short of food, with tens of thousands living in famine-like conditions, U.N. figures show. 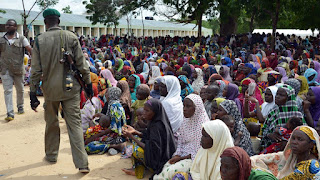 
On 7 June 2017, World Health Organization (WHO) was notified of a cholera outbreak in Kwara State, Nigeria, where the event currently remains localized. The first cases of acute watery diarrhoea were reported during the last week of April 2017 and a sharp increase in the number of cases and deaths has been observed since 1 May 2017. However, the number of new cases reported has shown a decline over the last four reporting weeks.
As of 30 June 2017, a total of 1558 suspected cases of cholera have been reported including 11 deaths (case fatality rate: 0.7%). Thirteen of these cases were confirmed by culture in laboratory. 50% of the suspected cases reported are male and 49% are female (information for gender is missing for 1% of the suspected cases). The disease is affecting all age groups.
Between 1 May and 30 June 2017, suspected cholera cases in Kwara State were reported from five local government areas; Asa (18), Ilorin East (450), Ilorin South (215), Ilorin West (780), and Moro (50) (information for local government areas is missing for 45 of the suspected cases).
Poor sanitation conditions observed in the affected communities is one of the predisposing factors for this cholera outbreak. An important risk factor is the lack of access to clean drinking water and poor hygiene conditions.
Public health response

The State Ministry of Health has established an Emergency Operations Center to coordinate the outbreak response with support from the Nigeria Centers for Disease Control, Nigeria Field Epidemiology and Laboratory Training Program, National Primary Health Care Development Agency, the University of Ilorin Teaching Hospital, WHO, and partners. The following response measures are being carried out:

The current outbreak occurs while the country is facing a serious humanitarian situation and is recovering from a large meningitis outbreak. At this stage, the overall risk is moderate at national level.
Potential issues of concern for this outbreak include the ongoing rainy season, the capacity challenges at the State level to manage the outbreak and the sharing of borders with five other States as well as Republic of Benin. Although these issues can potentially lead to the worsening of the outbreak and its spread to other States and neighbouring countries, the country has capacities to quickly control the outbreak.
The surveillance system should be strengthened in neighboring States to ease early detection of any potential spread of the outbreak.
WHO advice

WHO recommends enhanced surveillance for the detection of new cases and improvement of record keeping and data management at healthcare facility level. WHO recommends the urgent establishment of cholera treatment centres in the most affected areas, ensuring that adequate logistics are in place and that medical supplies are in stock. The establishment of a multisectoral approach is imperative to successfully addressing this outbreak.
WHO does not recommend any restriction on travel and trade to Nigeria on the basis of the information available on the current event.

Orthodox Mission in Tropical Africa (& the Decolonization of Africa)
«African needs to be helped, to find his divine roots, for his soul to be at peace, to become united with God...»
Orthodox Church & Capitalism: Orthodox Fathers of Church on poverty, wealth and social justice
Is capitalism compatible with Orthodox Christianity?
The orthodox old beggar who helps orphans
Grace and “the Inverted Pyramid”