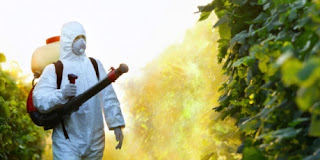 secure.avaaz.org
Monsanto is launching a super poison that kills plants in its path -- except for Monsanto GMOs. It even flies through the air onto neighbouring land!
But in days we can shut it down.
After a massive outcry from 1,000 affected farmers, a key US state could now ban this poison. This will set a precedent to influence regulation around the world.
Monsanto is mounting an intense pressure campaign, and hoping to keep it to a local fight. But if one million of us sign this petition now, we’ll submit it to the official process and show that the whole world wants this toxic chemical out of our fields and off our food! Add your name!
About
This miracle weed killer was supposed to save farms. Instead, it’s devastating them.
By Caitlin Dewey August 29 - The Washington Post 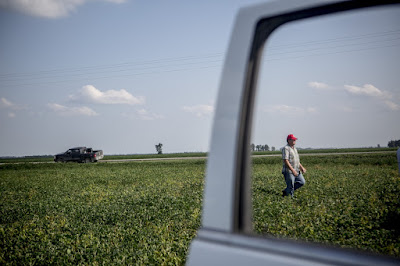 Lyle Hadden, a soybean farmer, walks through a field he's planted that shows signs of being affected by the herbicide dicamba. (Andrea Morales/For The Washington Post)

BLYTHEVILLE, ARK. — Clay Mayes slams on the brakes of his Chevy Silverado and jumps out with the engine running, yelling at a dogwood by the side of the dirt road as if it had said something insulting.
Its leaves curl downward and in on themselves like tiny, broken umbrellas. It’s the telltale mark of inadvertent exposure to a controversial herbicide called dicamba.
“This is crazy. Crazy!” shouts Mayes, a farm manager, gesticulating toward the shriveled canopy off Highway 61. “I just think if this keeps going on . . .”
“Everything’ll be dead,” says Brian Smith, his passenger.
The damage here in northeast Arkansas and across the Midwest — sickly soybeans, trees and other crops — has become emblematic of a deepening crisis in American agriculture.
Farmers are locked in an arms race between ever-stronger weeds and ever-stronger weed killers.
The dicamba system, approved for use for the first time this spring, was supposed to break the cycle and guarantee weed control in soybeans and cotton. The herbicide — used in combination with a genetically modified dicamba-resistant soybean — promises better control of unwanted plants such as pigweed, which has become resistant to common weed killers.

The problem, farmers and weed scientists say, is that dicamba has drifted from the fields where it was sprayed, damaging millions of acres of unprotected soybeans and other crops in what some are calling a man-made disaster. Critics say that the herbicide was approved by federal officials without enough data, particularly on the critical question of whether it could drift off target.
Government officials and manufacturers Monsanto and BASF deny the charge, saying the system worked as Congress designed it. Leaves and a stalk from a soybean plant showing signs of being affected by dicamba. (Andrea Morales/For The Washington Post)

The backlash against dicamba has spurred lawsuits, state and federal investigations, and one argument that ended in a farmer’s shooting death and related murder charges.
“This should be a wake-up call,” said David Mortensen, a weed scientist at Pennsylvania State University.
Herbicide-resistant weeds are thought to cost U.S. agriculture millions of dollars per year in lost crops.
After the Environmental Protection Agency approved the updated formulation of the herbicide for use this spring and summer, farmers across the country planted more than 20 million acres of dicamba-resistant soybeans, according to Monsanto.

But as dicamba use has increased, so too have reports that it “volatilizes,” or re-vaporizes and travels to other fields. That harms nearby trees, such as the dogwood outside Blytheville, as well as nonresistant soybeans, fruits and vegetables, and plants used as habitats by bees and other pollinators.
According to a 2004 assessment, dicamba is 75 to 400 times more dangerous to off-target plants than the common weed killer glyphosate, even at very low doses. It is particularly toxic to soybeans — the very crop it was designed to protect — that haven’t been modified for resistance.
Kevin Bradley, a University of Missouri researcher, estimates that more than 3.1 million acres of soybeans have been damaged by dicamba in at least 16 states, including major producers such as Iowa, Illinois and Minnesota. That figure is probably low, according to researchers, and it represents almost 4 percent of all U.S. soybean acres.
“It’s really hard to get a handle on how widespread the damage is,” said Bob Hartzler, a professor of agronomy at Iowa State University. “But I’ve come to the conclusion that [dicamba] is not manageable.”

[Forget GMOs. The next big battle is over genetically edited foods.]
The dicamba crisis comes on top of lower-than-forecast soybean prices and 14 straight quarters of declining farm income. The pressures on farmers are intense.

Arkansas one step from dicamba ban

LITTLE ROCK, Ark. — The Arkansas State Plant Board voted on Sept. 21 to approve a ban on the application of dicamba herbicide, from April 16 to Oct. 31, 2018.
“The whole process has been troubling all along. Yesterday was just another point that the process isn’t following science,” said Ty Vaughn, vice president of global regulatory affairs for Monsanto, after the board’s decision was announced.
“At the end of the day, they rejected our petition and voted for recommending the taskforce’s ban of all dicamba after April 16,” he said.
Vaughn spent the day at the plant board meeting trying to make the case for the board to allow farmers in Arkansas to use dicamba herbicide in 2018. The herbicide has been linked to crop damage of non-dicamba-tolerant soybeans and produce and fruit crops.
The proposed ban now will be subject to a 30-day comment period, followed by a public hearing on Nov. 8. Following the comment period and the hearing, the final rule proposal will go to the executive subcommittee of the Arkansas Legislative Council to be approved.
Vaughn said that Monsanto has “options,” but said it was too early to talk about the next steps the seed company might take.
“We’ve got options, of course, with the public comment period and other things we’ll have to consider. This is new news, so it’s premature on what course of action we’ll take, but all options are going to have to be considered,” he said.

Vaughn said that a petition signed by Arkansas farmers who want access to the dicamba herbicide for their farms was submitted to the plant board, but farmers were not asked to speak during the meeting.
“Other industry representatives talked and other stakeholders were also allowed to talk. The one group that wasn’t allowed to speak was growers, which is clearly an unfortunate situation since we’re trying to solve for growers having weed resistance issues,” he said.
Vaughn added that time is of the essence so that farmers in Arkansas can make their seed decisions for the 2018 growing season.
“That’s the dilemma. Growers would normally be buying seed now,” he said.
He said some farmers in the state purchased the Xtend platform, which includes dicamba-tolerant soybeans, for the genetics, but most growers also wanted the weed control benefits.
“Even yesterday, that was mentioned, that growers bought the trait, but not just for the herbicide tolerance, but for the germplasm. So some growers are going to continue to do that anyway, but those growers who have the weed resistance issues do have to make a decision,” he said.

Orthodox Church & Capitalism: Orthodox Fathers of Church on poverty, wealth and social justice
Is capitalism compatible with Orthodox Christianity?
Grace and “the Inverted Pyramid”
The Orthodox African Church (Patriarchate of Alexandria) denounces the exploitation of Africa by contemporary colonialists