With an armed rebellion threatening to undermine Uganda’s progress to economic development, child soldiers emerge as central figures amid deadly violence and growing humanitarian emergency.
The bustling capital city of Kampala, located in the south, exemplifies Uganda’s transformation from a country plagued by economic decay to prosperity. With a revitalized GDP growth of more than 8% over the past three years, Uganda comes across as a compelling story of hope for other African nations. However, an armed insurgency in northern and eastern Uganda has created one of Africa’s largest displaced populations.
The 18-year old rebellion of the Lord’s Resistance Army (LRA) against the government has forced over 1.6 million Ugandans - half of them children - to flee to squalid and overcrowded camps in order to escape wanton attacks and killings. The number of internally displaced persons has almost tripled since 2002. Attacks on soft civilian targets continue, carried out by child soldiers much younger than their victims.
The most disturbing aspect of this humanitarian crisis is the fact that this is a war fought by children on children - minors make up almost 90% of the LRA’s soldiers. Some recruits are as young as eight and are inducted through raids on villages. They are brutalized and forced to commit atrocities on fellow abductees and even siblings. Those who attempt to escape are killed. For those living in a state of constant fear, violence becomes a way of life and the psychological trauma is incalculable. Fearing abduction, streams of children, often with mothers in tow, leave their homes every night and walk for hours from surrounding villages to reach the relative safety of major towns, only to trek their way home in the first light. Some 40,000 “night commuters” sleep under verandas, in schools, hospital courtyards or bus parking places to evade the snare of the LRA.
Since the rebellion began in the 1980s, some 30,000 children have been abducted to work as child soldiers and porters, or to serve as “wives” of rebels and bear their children. These numbers have soared, with 10,000 children abducted in the past 18 months alone.
Despite the gravity of the humanitarian situation, less than 10% of the $130 million requested by the humanitarian community for 2004 has been received. In some areas, malnutrition rates as high as 30% have been recorded among children. Fear of rebel attacks badly hit the planting season for 2004, threatening to aggravate the already severe food shortages in the coming months. Health facilities barely function as stocks run out and health workers flee to escape LRA attacks.
Even as a peace process makes significant progress in neighbouring Sudan, the peace in Uganda is made tenuous by these developments. The “success story” that Uganda represents in the minds of the world’s economic policy makers presents a jarring contrast with the tragedy of conflict in the north and east that shows no signs of abating.

The Lord’s Resistance Army (LRA), a rebel group led by Joseph Kony, originated in Northern Uganda as a movement to fight for the interests of the Acholi people. Kony rapidly lost support, and for the last 24 years has led a terrifying regime targeting attacks on innocent civilians, kidnapping children and forcing them to fight in his rebel forces.
Driven out of the country by the Ugandan army, the LRA’s rebels are now scattered across the Democratic Republic of Congo (DRC), Central African Republic (CAR) and southern Sudan, where brutal attacks continue on remote villages that can take months to be reported.

How did it all start?
The Lord’s Resistance Army began life in the early 1980’s as the Holy Spirit Movement, led by a woman called Alice Lakwena who claimed the Holy Spirit had ordered her to overthrow the Ugandan government, which was accused of treating the Acholi people of the North unfairly. As resentment towards the Ugandan government intensified, supporters flocked to Lakwena and the Holy Spirit movement gathered momentum, until a battle won by the government led to Lakwena’s exile.
With no clear direction for the movement, a man claiming to be Lakwena’s cousin, Joseph Kony, took over as leader and rebranded the movement in 1986 as the Lord’s Resistance Army. Kony initially stated that the LRA’s mission was to overthrow the government and rule Uganda based on the Ten Commandments. He rapidly lost support, however, and in frustration Kony began abducting thousands of children to swell its ranks, turning them into killers and unleashing them on villages.

How does the Lord's Resistance Army operate?
The rebels often masquerade as military soldiers, or pounce as villagers gather together for occasions such as church services. They launch vicious attacks, killing the weak and the old with machetes, swords or stones, and cutting off people’s ears, lips and noses to serve as a warning to others. The rebels capture those who can be useful to them, including children strong enough to carry weapons. The captives are tied together and marched to camps where they are violently indoctrinated and turned into soldiers, porters, cooks, or sex slaves. Captives are often forced to kill or rape family members, making it impossible for them to think about returning home. Those who do resist or try to escape are tortured and killed.

Why hasn’t the conflict been resolved?
Numerous attempts to reach a peace agreement were made between the LRA and the Ugandan government, but Kony withdrew each time. The Ugandan People’s Defence Force (UPDF) – i.e. the Ugandan army continues its pursuit of the rebels and claims that they have substantially weakened the LRA, but the ongoing attacks suggest otherwise. In the DRC, the UN mission MONUSCO is under-resourced and unable to protect civilians or contain the LRA’s activities. Communication is also a severe problem; attacks are happening in extremely remote regions, and news of incidents can take weeks, even months, to come to light. 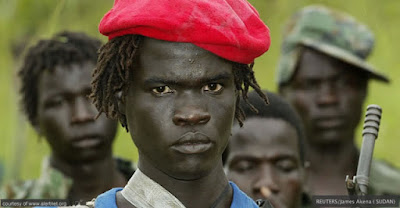 Why does the LRA target innocent civilians?
By attacking villages and carrying out its notorious vicious attacks, the LRA defies claims that the group is weakening. Rebels also loot villages for food and supplies, and abduct adults and children to fight for them. The attacks also serve to divert military resources towards defending civilians instead of pursuing the rebels.

Who are the key players?
Joseph Kony is the founder and leader of the LRA. His top commanders, wanted alongside Kony for war crimes, are Okot Odhiambo, Dominic Ongwen, and Raska Lukwiya. Kony’s deputy, Vincent Otti, was executed on Kony’s command in 2007 for his role in peace talks. Another high profile commander, Bok Abudema, was killed in battle in early 2010.

How have children been affected?
Children have been affected the most acutely by this conflict, with thousands abducted, used as child soldiers and sex slaves, beaten and forced to torture and kill friends, family and innocent people. Those lucky enough to escape the clutches of the LRA deal with ongoing psychological trauma from their experiences, and face huge problems reintegrating back into their communities. Hundreds of thousands have been displaced from their homes and are forced to live in camps with poor sanitation and health facilities. Even those not directly in contact with the LRA suffer the consequences of poor education due to schools being destroyed by rebels and not being able to afford fees.

How has the international community responded?
The International Criminal Court issued arrest warrants in 2005 for Joseph Kony and his top level commanders, but regional and international agents have failed to apprehend them.