The Need To Read Something Deeper 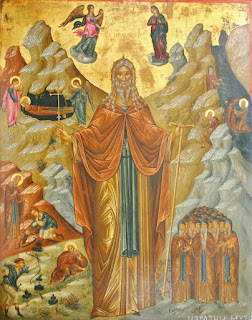 Icon from here, the 99 Egyptian holy fathers in Crete.

During the first 300 years of Christianity, to be a member of the clergy or known as an unapologetic Christian was a sentence to torture and death. Early believers read and followed any papyrus or scroll written by and about these men and women they could find. After the persecutions ended under Constantine, Christians who were ready to renounce the world before wild beast did so in the deserts of Egypt, Syria, and the Siberian forest. Those who did not become monks and nuns sought their advice and were greatly influenced by their wisdom. Despite disputes between them, Eastern and Oriental Orthodox Christians (and early Roman Catholics) held the ancient monastic writings and early church fathers in the highest regard second only to the Bible.

Unfortunately, something changed during the magisterial and radical reformations as well as the revivalist movements in Western Christianity. There arose this idea that earthly wealth and influence was a sign that God’s favor was upon one’s life. While the early Baptist, Methodist, Church Of God In Christ and other denominations may have intended that their churches would be among the flourishing examples of this doctrine, this concept has landed in the hands of many freelance “non-denominational” clergy who use it and the name of Jesus to reap millions of dollars from people who are unknowing about Christian history.

What I find most frightening about this earthly wealth as evidence of God’s favor doctrine is that intelligent and well-meaning people have and are falling for this trap hook, line, and sinker. They fall for it because the TV and radio stations blast the latest sermons and Gospel hits without any meditative and self-sacrificial lessons from the more contemporary likes of Howard Thurman or Dietrich Bonhoeffer, much less from Ignatius of Antioch or Theophan the Recluse. Books by well publicized inspirational authors dominate bookshelves at Barnes & Nobel and Wal-Mart where profits come before investigating the roots of Christian spirituality. No one is telling modern Christians that there is a firmly grounded, tried and true alternative to “flavor of the month” Christian preachers and writers.

What makes this trend of adhering to those who promote such a doctrine is that it ultimately fails. There are people who have been blaming themselves for not receiving their “breakthroughs” and “shifts” saying that they weren’t faithful enough or their “season” has not come yet. Like rain and sunshine, God allows any person who works hard and smart to get rich or go broke. Those who fail to receive the financial promises they have been seeking for years will give up on Christianity and become bitter. Those who do become well off in the midst of such false doctrine will become arrogant and blind to what it is to become Christ like when called to “… Go and sell all you have and give it to the poor. Then come and follow me.”

Anthony and the Desert Fathers did what the rich young man failed to do. And because these men and women renounced the world to devote themselves to a true and pure pursuit of God, they were and are greatly honored by Christians of many generations. Church Fathers such as Basil and John Chrysostom did not enrich themselves in their leadership positions. They built schools and hospitals and dressed just as modestly as a monk or reader. The lessons of the Philokalia did not come from men who hustled for “seed offerings” to repair their private jets. These were monks who ate little more than beans, bread, and vegetables. None of them expected to become wealthy. They were too busy obeying the requirements for following Christ, “Deny thyself, take up thy cross, and follow me.”

Perhaps the latest book by the latest Christian preacher or inspirational speaker may have a good quote or two. Snack foods do have a few bits of nutrition. But, a healthy body is the time-tested result of good meals and exercise. Our journey with Christ should also include the time-tested spiritual writings of the Bible and the writings of those who were of the atmosphere that the New Testament books were written and compiled. How does one find such books in the midst of a Trinity Broadcast Network dominated Christian environment? It isn’t easy. But, it is possible.

I personally recommend Fr. Athanasius Iskander’s “Practical Spirituality According to the Desert Fathers” is a great introduction to some of the most enlightening men of the monastic world. One need not be a church history buff to apply these ancient lessons to modern life. The Fr’s name sake wrote a short volume “The Life of Saint Anthony,” the man who was the father of all monks and nuns. “Early Christian Writings: The Apostolic Fathers” is a reader friendly introduction to the 38 volume set of the Early Church Fathers (which can be read by anyone online for FREE). Orthodox Churches tend to maintain libraries as most public ones have little concerning church history and this ancient faith. Roman Catholic sources are useful as they do point several sources older than 1054 AD (the date of the Great Schism between Catholicism and Orthodoxy).

To grow spiritually, we must not rely on recent authors alone as our source of Christian literature and teaching. Take the time to discover ancient Christian writings and talk to a priest who is well versed in the early and monastic writings.
Αναρτήθηκε από ΝΕΚΡΟΣ ΓΙΑ ΤΟΝ ΚΟΣΜΟ στις 12:39 μ.μ.