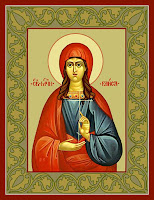 According to one account, she was the daughter of a Christian priest living in Alexandria, Egypt. At age twelve, she was sent to live in a women's monastery at Tamman. One day in 303 AD, during a time of widespread persecution of Christians during the reign of the Roman emperor Diocletian, she went to a well to draw water with other nuns. On the way, they saw a ship with a group of nuns, monks, and other Christians in chains, being abused by Loukianos. Rais berated the abusers and insisted that they kill her as well if they were killing Christians. They imprisoned her as well. When the ship reached Antinopolis, Rais was one of the first to die. When Loukianos yelled, "I spit upon the Christian God," Rais objected, stepped up and spat in the tyrant's face. Loukianos ordered the girl to be tortured and beheaded. 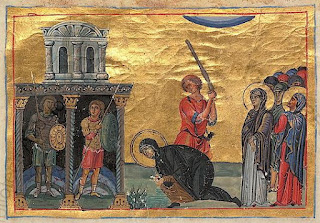 Saints Andrew and John, and John’s Children Peter and Antoninus from Syracuse, martyrs in Africa

The Holy Martyrs Andrew and John, and John’s Children Peter and Antoninus, suffered in the ninth century in the time of the cruel African ruler Ibrahim. After the capture and destruction of the Sicilian city of Syracuse, Ibrahim captured and brought to Africa Saint John and his two children, Peter and Antoninus, whom he compelled to study the Arab language and sciences.
When the youths had grown, Prince Ibrahim was so fond of them for their wisdom and virtuous life, that he named Antoninus his kinsman, and he appointed Peter as his chief steward. Once he learned that the youths secretly confessed faith in Christ, however, Ibrahim flew into a furious rage, ordering them to be bound with iron shackles and beaten with knotted rods.
After prolonged scourging, they put Saint Antoninus on a donkey, tied him on with straps, then drove him through the city, beating and ridiculing him with abuse. The martyr endured all the insults and gave thanks to God. Saint Peter was thrown into prison after a fierce beating with the rods.
An order was issued to arrest John, the father of the holy martyrs. The brutal Ibrahim grabbed him by the neck with his left hand, and with his right he thrust a knife into his throat. They threw the body of the father together with the bodies of his sons. They then lit a large fire and cast the bodies of the holy martyrs into it. 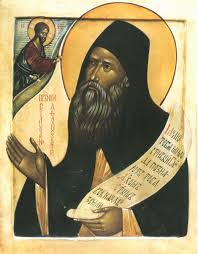 As for Saint Andrew, the torturer wore him down with hunger, and then ran him through with a spear in the chest. When the martyr prayerfully began to give thanks to God, Ibrahim ran him through a second time. As he lay dying from loss of blood, they beheaded the righteous martyr with a sword.

From Herod to ISIS through Christ: No Record of Retribution! (& a lesson from the martyrdom of the African Saint Cyprian of Carthage)
The Orthodox Christian sentiment regarding the persecutions of Christians by Islamists
Apostle Paul, the Christian equivalent to Mohammed
Early Muslim conquests & Rashidun Caliphate
For the Copts Martyrs of the May 2017